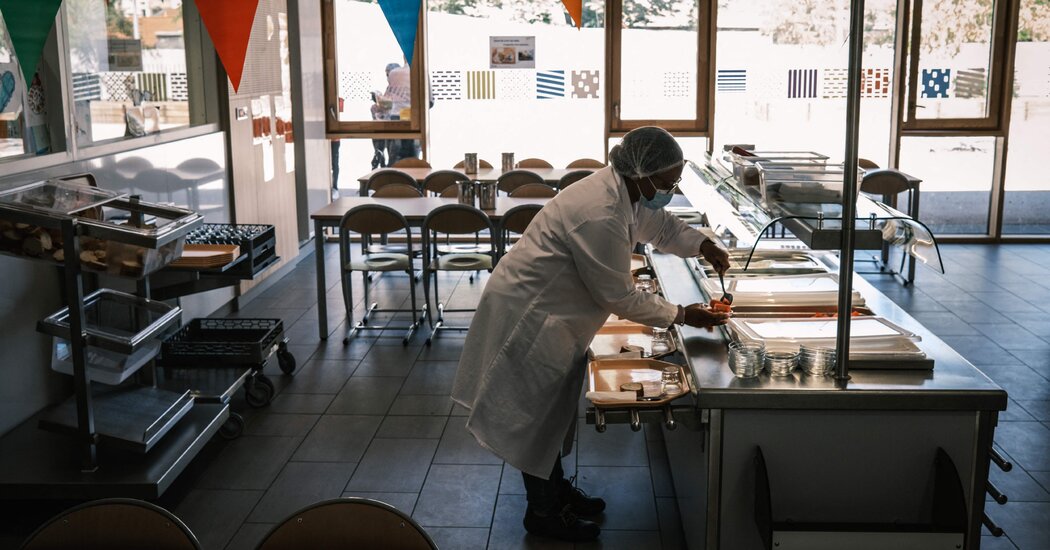 PARIS — France passed a wide-ranging law to tackle climate change on Tuesday, creating a raft of bans, incentives and quotas on transportation, housing and consumption that are meant to lower greenhouse gas emissions and cut waste, despite criticism from environmental groups that the measures aren’t ambitious enough.

The law comes amid extreme weather episodes that have exacerbated worries about the impact of global warming, especially in Europe, which recently unveiled an aggressive blueprint to pivot away from fossil fuels, and where countries like Germany and Belgium were hit last week by deadly floods that thrust climate change to the top of the political agenda.

President Emmanuel Macron, who is up for election next year, has tried to put France at the forefront of the fight against climate change.

But his support for a “pragmatic ecology” — made of small, concrete steps and mindful of economic impacts — has faced criticism from left-wing politicians and environmental activists who say that his policies are too weak to make a real difference. Court rulings and reports by top expert bodies have also warned that his government is not on track to fulfill France’s commitments to reduce greenhouse gas emissions.

Jean-François Julliard, the executive director of Greenpeace France, said that the law didn’t live up to “the emergency of the situation.”

“It’s a missed opportunity,” Mr. Julliard said at a small demonstration of about 30 activists in Paris on Tuesday.

The climate law was passed in final votes by the upper and lower houses of France’s Parliament after both houses compromised on a common version of the bill earlier this month. The Senate, which is dominated by the right, passed the law with a raised-hand vote; the National Assembly, where Mr. Macron’s party has a majority, passed the law with 233 votes in favor and 35 against.

The law is a hodgepodge of bans, financial incentives and other measures that aim to cut waste, improve energy efficiency and reduce carbon emissions in day-to-day life. Some will go into effect immediately.

Among the changes: Landlords are no longer allowed to rent poorly insulated properties; single-use food packaging made of polystyrene will be banned starting in 2025; advertising for fossil fuel energy, like gasoline, is set to be phased out; and weekly vegetarian menus will become the norm in state-funded school cafeterias.

Domestic flights for journeys that can be made by train in less than 2.5 hours are banned, unless they connect to an international flight. Subsidies for drivers who trade in a polluting car for a cleaner one have been extended to electric bicycle purchases. The law will also create low-emission zones in urban areas with over 150,000 inhabitants by 2025, limiting the circulation of certain polluting vehicles.

A coal-fired power plant in 2019 in Cordemais, in western France. Experts have warned that France is not on track to fulfill its commitments to reduce greenhouse gas emissions.Credit…Loic Venance/Agence France-Presse — Getty Images

Barbara Pompili, France’s minister for ecological transition, told lawmakers on Tuesday that the planet was “running out of breath,” and she cited the recent floods in Germany and Belgium as proof that “the climate is turning into a threat.”

“We are living troubled and difficult times,” she said. But “our future belongs to us,” she added, calling the new law a “cultural shift” that would bring ecology directly into people’s lives.

The law was inspired by the Citizens’ Climate Convention, a panel of 150 randomly selected people from across the country who were tasked with formulating proposals, with the help of experts, that would balance ambitious climate legislation with economic fairness.

Mr. Macron convened the convention last year in the wake of the Yellow Vest protests that started in late 2018, when anger over an increased fuel tax snowballed into broader and sometimes violent unrest.

But environmental activists — and even some members of the citizens panel — have complained that the final version of the climate bill falls short of the convention’s initial ambitions.

“Within the context of climate cataclysms in Europe at the moment, this law is an aberration,” Manon Castagné, an activist with the environmental group Amis de la Terre, or Friends of the Earth, said at the demonstration.

Climate activists protested in Paris in March.Credit…Yoan Valat/EPA, via Shutterstock

The law gives regions the ability, but does not require them, to tax the polluting activities of freight merchandise transportation starting in 2024. And a tax on polluting nitrogen fertilizers used in farming will only be “considered” if reduction targets are not met.

Earlier this month, the government also dropped plans to enshrine the fight against climate change in France’s Constitution — a significant setback for Mr. Macron, who had framed the change as the symbolic backbone of his environmental policies and had promised to hold a referendum on the issue.

The High Council on Climate, an independent body, warned in a recent report that France’s efforts were “insufficiently” in line with its pledge to curb greenhouse gas emissions by 40 percent by 2030 — compared with 1990 levels — to stay on track with its Paris Agreement commitments. France’s top administrative court also recently gave the government a nine-month deadline to take “all the necessary steps” to reach its emission reduction targets, or face possible financial penalties.

BPCL says no intention to sell stake in Petronet, IGL

Trevor Noah: Marjorie Taylor Greene Has a Lot to Learn

Plane Crashes in Russia With 28 People Aboard