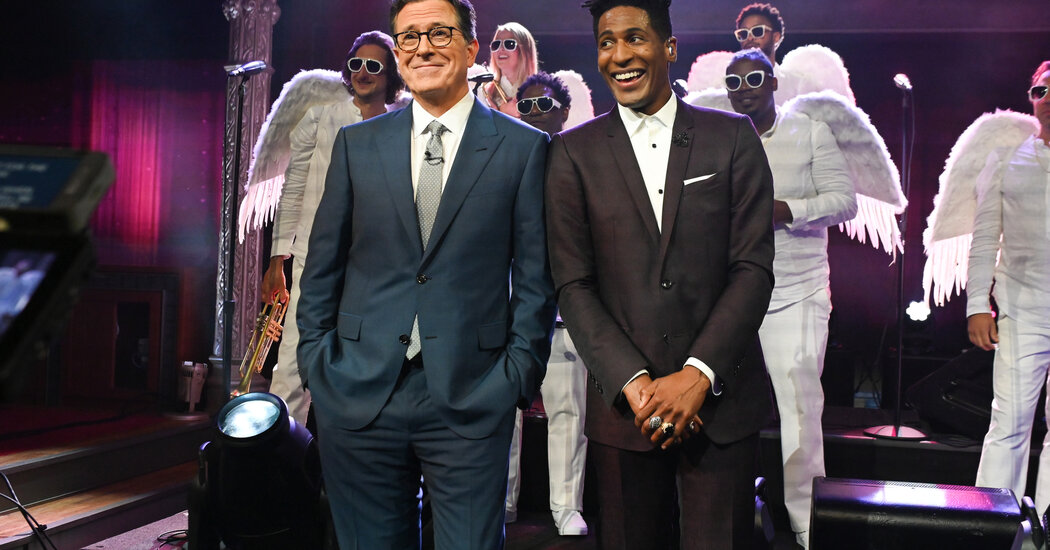 The “Late Show” host meets an audience ready to exhale and gets a visit from a ranty old friend.

Stephen Colbert and his bandleader, Jon Batiste, returned to their first full-sized live “Late Show” audience in over a year on Monday night.Credit…Scott Kowalchyk/CBS

It took Stephen Colbert 15 months to get back in front of a full, live audience telling jokes.

Then it took a minute or two more.

Colbert took the stage at the Ed Sullivan Theater Monday after a song-and-dance cold open in which the host reunited with his work trousers. But before he could start his monologue, there was a big hug with his bandleader, Jon Batiste, and there was the audience, standing, cheering, chanting his name.

When the noise died down, he asked: “So how ya been?”

The ovation was the answer. We’d been away. We’d been cooped up. We’d been a little stir crazy, frankly, and it felt good to let it all out.

There was a monologue, of course, just as there had been to crowd upon crowd before Colbert and his peers on other networks delivered rushed goodbyes to empty rooms. There were jokes about the vaccine and working remotely and the host’s rustiness: “I don’t know if I even remember how to pander to the most beautiful crowd in the world.”

But really the monologue wasn’t the big attraction that night, nor, really, was Colbert. The cheers were the point. A crowd of people shoulder to shoulder, masks optional, hooting and whooping and publicly expelling aerosols from their lungs in precisely the way that, for over a year, we had been trained not to, on pain of possible death.

In-person TV has been creeping back in little ways across the dial. On NBC, Jimmy Fallon brought back a full audience, with masks, last week. But because Colbert’s “The Late Show” had the biggest audience in late night when it went remote (and rebranded itself “A Late Show”), its reappearance feels like more of a signal event. If it’s back, maybe the rest of life is, too.

There was something of a surviving-your-own-funeral aspect to the reunion. Colbert hadn’t gone anywhere, TV-wise. But it’s one thing to host the biggest show in late night in front of an adoring crowd and another to do it from your bathtub.

Even the most aloof of late-night hosts — Johnny Carson and David Letterman, in their own ways — rely on the aggregate energy of the crowd. And Colbert is not an aloof performer. Having him and his crowd renew their vows recalled past late-night reunions, like when Letterman returned to the air after heart surgery. Except that this time, all of us had the health crisis.

“I don’t know if I even remember how to pander to the most beautiful crowd in the world,” Colbert quipped Monday night.Credit…Scott Kowalchyk/CBS

Colbert’s show was also, since it found its Resistance-liberal voice in the Trump years, the most political of the late-night shows. And the manner of its return was also a kind of political act, insofar as vaccines have been politicized. (An extended version of his segment “The Vax Scene” had him go into the crowd with costumed syringe dancers and shimmy with an audience member.)

“The Late Show,” after all, was back back, not in attenuated form but with a full — and vaccinated — audience. No masks (except by choice), no distance, no half-rooms, no half measures. You can get life back the way you had it before, the production said. But you got to get jabbed.

“Being a member of my audience isn’t the only reason to get your shot,” Colbert said. “It’s just the best reason.” Of course, given the political leanings of his audience, in-studio and out, he was likely preaching to the injected.

But as it turned out, the comeback audience would be getting more than just funnier versions of their own thoughts repeated back at them.

The tension came from, of all sources, Colbert’s old Comedy Central crony, Jon Stewart. He bounded onstage with the coiled-spring energy of the newly released from quarantine and the grizzled beard of someone who’d been through an apocalypse or two. (“Jews age like avocado,” he said.)

And he proceeded to talk — no, rant — no, evangelize — about the lab-leak theory of Covid-19, riffing sarcastically about the initial Covid-19 emergence in Wuhan, China, home to the Wuhan Institute of Virology.

“There’s been an outbreak of chocolaty goodness near Hershey, Pa. What do you think happened?” he asked. “Maybe a steam shovel mated with a cocoa bean?”

Now, I am not going to adjudicate Stewart’s scientific reasoning. God help us when we rely on comedians to solve microbiology, or on TV critics to peer-review their findings.

But within the context of “The Late Show,” the lab-leak theory is one that was demagogued by President Trump, who blatantly embraced racist rhetoric about China and the pandemic. The theory — at least, the less conspiratorial version of it — has since been opened to investigation by the Biden administration. But given the history, it arrives in the context of the “Late Show” fan base as something that bad people bring up, for bad reasons.

Now here was Jon Stewart building an entire comedy routine out of it. And it made for interesting, productively dissonant TV. Colbert, occasionally pushing back, often letting Stewart roll, was caught between his old friend and his audience’s expectations. “How long have you worked for Sen. Ron Johnson?” he asked, referencing the Wisconsin Republican who has been Patient Zero for Covid misinformation.

Jon Stewart spent much of his appearance riffing on the Wuhan lab-leak theory of Covid-19.Credit… Scott Kowalchyk/CBS

The segment was charged in a way that it couldn’t have been without a live audience there, in the room. Even the eventual common-ground conclusion that Colbert steered Stewart toward — that science can go too far without thinking of the consequences — carried a charge, given how the last year (and more) has made “science” a poster-board synonym for anti-Trumpism.

In a way, the encounter was like watching 2015 make a guest appearance in 2021. A lot has changed in talk TV since Stewart left “The Daily Show” (though the bit, right or wrong, also showed how he can sustain a comedic argument when he’s engaged about something).

But also, a lot has changed since Colbert was last in front of a crowd at the Ed Sullivan. There wasn’t just a pandemic. There was George Floyd’s murder and the ensuing protests, which Batiste engaged in. (He performed “Freedom” on Monday night, from his anthemic album “We Are.”) There was an election and an attack on the Capitol and the inauguration of President Biden, whom Dana Carvey played with “Come on, man” fidelity on Monday’s show.

Beyond the pandemic new normal, it’s worth wondering what Colbert’s “Late Show” will be in this post-Trump (and yet not post-Trump) political era, when there may be more oxygen for disagreements among friends and allies. Over his years in front of the CBS audience, Colbert developed a moral authority and cultural soft power, meeting the times with withering sarcasm and sincere emotion. But does that influence come with invisible limits?

That sort of question gets answered over months and years. Monday, in the end, was mainly about closing a chapter. Colbert ended his monologue by bringing onstage his wife, Evie, who had served as his audience surrogate. Turning the job back over to the crowd, she said, “Don’t forget to laugh, because he really needs it.”

Him and us both.

Possible Winners and Losers in a Student Loan Proposal