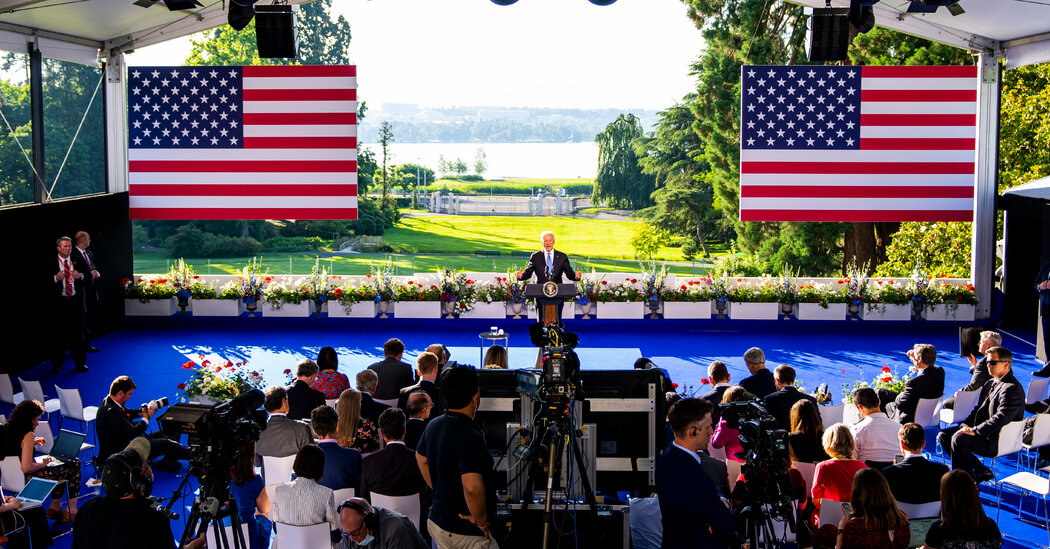 The American leader aimed to look strong on security while also not making too many waves.

President Biden and his aides were careful to lower expectations for the blockbuster part of his first trip abroad as president: his meeting with President Vladimir V. Putin of Russia.

“We’re not expecting a big set of deliverables out of this meeting,” a senior administration official told reporters aboard Air Force One as the president flew from Brussels to Geneva on Tuesday ahead of the summit.

But that didn’t mean that the administration and the president had not thought about what they hoped to achieve by giving Mr. Putin an international platform — something that critics on both the left and the right have said was a mistake for Mr. Biden to do.

Since taking office, Mr. Biden has received criticism for not taking a stronger stand on human rights. Some critics say he has not responded forcefully enough to the poisoning of Aleksei A. Navalny, a dissident and Putin critic.

The White House disputes that criticism. But the administration saw the meeting with Mr. Putin as an opportunity to challenge the Russian leader on his treatment of Mr. Navalny and his country’s support of Belarus, which detained a journalist by forcing down a passenger plane.

Part of Mr. Biden’s sales pitch during the 2020 presidential campaign was that he would turn his predecessor’s approach to Russia on its head.

Now, after four years in which Mr. Trump’s ties to Russia were continuously scrutinized, Mr. Biden and his top advisers were eager to present the president as a Moscow skeptic — someone who will not take Mr. Putin at his word as Mr. Trump famously did at a 2018 summit in Helsinki.

The Geneva meeting gave Mr. Biden the chance to draw that contrast explicitly and to be seen as standing up to the Russian president in ways that his predecessor did not. (One difference: Mr. Biden and Mr. Putin are not standing side by side in a joint news conference, a decision that American officials made early on, in the hopes of not giving the Russian leader a chance to try to outshine Mr. Biden.)

To take on cyberattacks

American intelligence officials say the Russian government has expanded its use of cyberattacks against the West, and the United States is one of the key targets.

Administration officials said Mr. Biden was determined to deliver a stern message to Mr. Putin about the use of cyberweapons and the dangers of an escalating online war.

To avoid rocking the boat

Mr. Biden and the administration were careful to deliver a nuanced message about what kind of relationship they want with Russia and its leader. The phrase they used the most: “predictability and stability.”

Those are not words that evoke the image of a president bracing for an all-out fight with an adversary. In fact, White House officials have repeatedly said that Mr. Biden hopes to work with Russia where possible, even as he stands up to Mr. Putin in other areas.

To make some concrete progress

If he was able to find that balance, Mr. Biden hoped to make some modest progress.

The two leaders might be able to further efforts to reduce the proliferation of nuclear weapons. They might also work together in the Middle East, where Russia helped negotiate the Iran nuclear deal. And Mr. Biden has also said he wants Russia to be part of global efforts to combat climate change.

India may open derivatives market for power sector next fiscal