‘The World Is Watching’: Britain Gambles on Reopening Despite the Delta Variant 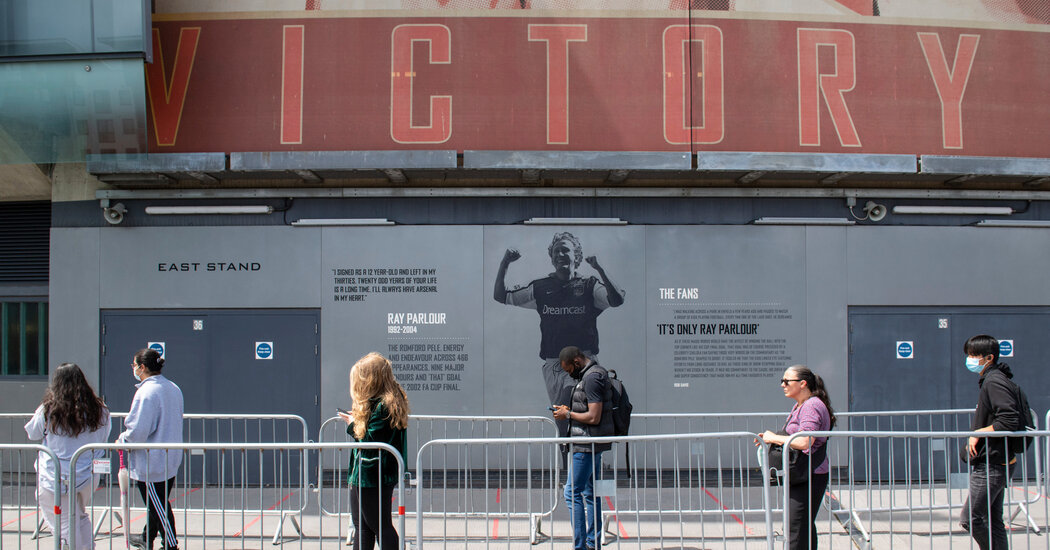 LONDON — A week from now, more than 60,000 soccer fans will pack Wembley Stadium in London for the European Championship final. British travelers with two vaccine shots will soon be welcomed back to Germany, which had banned them. And Prime Minister Boris Johnson said he was on track to lift most remaining coronavirus restrictions on July 19 — or, as the British press has dubbed it, “Freedom Day.”

All this in a country that reported 27,125 new cases of the virus on Friday, a 52 percent jump over just a week earlier.

Britain’s determination to reopen its society, even amid a steep rise in cases, amounts to a bold experiment, one that will be closely watched in the United States and across Europe: Can a country with a largely vaccinated adult population learn to live with the coronavirus?

“The world is watching the U.K. to see what living with Covid and high vaccine uptake looks like,” said Devi Sridhar, head of the global public health program at the University of Edinburgh. “The next few weeks will reveal if they’ve gambled correctly, or we end up having another wave of high hospitalizations.”

Professor Sridhar embodies a striking shift in attitude in Britain, which has gone from one of the longest stretches under lockdown in any advanced economy to one of the swiftest vaccine rollouts and now, to a reopening.

Those serial lockdowns were necessary, she said, because Britain never properly cut off international travel — a major culprit for spread of the highly transmissible Delta variant, which originated in India. That meant there was always the risk of an outbreak that could overwhelm the nation’s hospitals.

The arrivals hall at Heathrow Airport in January. Britain never completely cut off international travel, which could have led to a major increase in coronavirus cases.Credit…Matt Dunham/Associated Press

Now, though, with 62 percent of adults having received two doses, scientists say it is time to test the resilience of vaccines in a reopened society. If early promising signs hold up, Professor Sridhar said, Britain could reach a coveted goal: population immunity through inoculation rather than infection.

Britain’s experience is a mirror image of that of Australia, which shut down its borders in a campaign to drive coronavirus cases down to zero but has lagged in vaccinating its population. With the Delta variant now popping up there, Australians are discovering the downside of their fortress strategy and are experiencing another lockdown of state borders 16 months into the pandemic.

Britain’s recent rise in cases, most of which are also attributed to the variant, has yet to be followed by a commensurate rise in hospital admissions or deaths. That could be because of more testing or a greater number of cases among younger, unvaccinated people. But some scientists say it also suggests that the widespread deployment of vaccines — particularly among the most vulnerable populations — has weakened the link between infection and serious illness.

That has emboldened Mr. Johnson to stick to his plan to lift most restrictions on July 19, a date that had slipped once before because of the government’s earlier jitters about the Delta variant. The prime minister even holds out hope that fully vaccinated Britons will be able to travel to continental Europe on summer holidays without facing as many restrictions — something that looked unlikely just a few weeks ago.

“I’m very confident that the double jabs will be a liberator and they will enable people to travel,” he said on Thursday. “There’s no doubt at all that once you’ve got two jabs you are in a much better position.”

There are many caveats, of course. Whether Britons can resume traveling widely depends on the willingness of other countries to let them in. Until now, they had been treated almost as pariahs. Germany and Italy require arrivals from Britain to quarantine, while the United States still bans most British passport holders.

Chancellor Angela Merkel of Germany even tried to persuade the European Union to impose a blanket quarantine on arrivals from Britain. She dropped that campaign, largely because of resistance from southern European countries that depend on British tourism revenue. On a visit to Britain on Friday, Ms. Merkel signaled that Germany would soon relax its restrictions on Britons.

“In the foreseeable future, those who have been vaccinated twice will be able to travel again without going into quarantine,” she said at a news conference with Mr. Johnson at his country residence, Chequers.

Negotiations to open a travel corridor between Britain and the United States, however, have bogged down. And Britain still maintains a cumbersome set of restrictions on those coming from other countries, including the United States. Frustrated travel executives point out that Britain has been harder hit by the Delta variant than other European countries, though the gap is narrowing.

“We present a greater risk for them than they do for us,” said Steven Freudmann, chairman of the Institute of Travel and Tourism, an industry lobbying group. “It’s ironic that we should be placing restrictions on inbound travel.”

British officials have pledged to revisit these restrictions, but they have shown a propensity to delay other promised steps. “Freedom Day” was originally scheduled for June 21; Mr. Johnson postponed it four weeks amid signs that the Delta variant was turbocharging cases.

Still, the weight of the debate inside his cabinet has shifted, especially after the resignation last week of the health secretary, Matt Hancock, who was caught up in an extramarital affair with an aide. Mr. Hancock was a lockdown hawk; his replacement, Sajid Javid, a former chancellor of the Exchequer, is viewed as much more determined to reopen the economy.

A major test of Britain’s commitment to restoring normalcy will come with the soccer championship. British authorities have yet to allow anything close to a sellout crowd at Wembley, which has played host to several games, including this week’s thriller, in which England defeated Germany. Admissions have so far been capped at 22,000 people in a stadium that seats 90,000. Under current plans, two-thirds of the seats could be filled for the finals.

With Mr. Johnson standing next to her, Ms. Merkel said she was “worried and skeptical” about whether it was a good idea to pack stadiums. Earlier in the week, Prime Minister Mario Draghi of Italy demanded that the final be moved out of England because of the high incidence of the variant.

The World Health Organization said crowds of soccer fans — whether gathered in stadiums, pubs, bars or fan zones — were fueling a Delta outbreak across Europe. Health officials in Scotland said nearly 2,000 people tested positive for the virus after getting together to watch games. Two-thirds of those traveled to London on June 18 for Scotland’s match with England.

British officials insist they will maintain rigorous safety standards at Wembley, demanding proof of a negative coronavirus test or full vaccination, which requires the second of two vaccine doses to be given at least 14 days before the game. Regardless, as Professor Sridhar pointed out, no British politician is going to stand in the way of a potential England championship, before a capacity crowd, in London.

“The position is very clear in the U.K,” Mr. Johnson said, pushing back gently on Ms. Merkel. “We have certain events which we can put on in a very careful and controlled manner with testing of everybody who goes there.”

Inside Our Subway Tuna Sandwich Test

Why Israel Faces a Fourth Election in Just Two Years