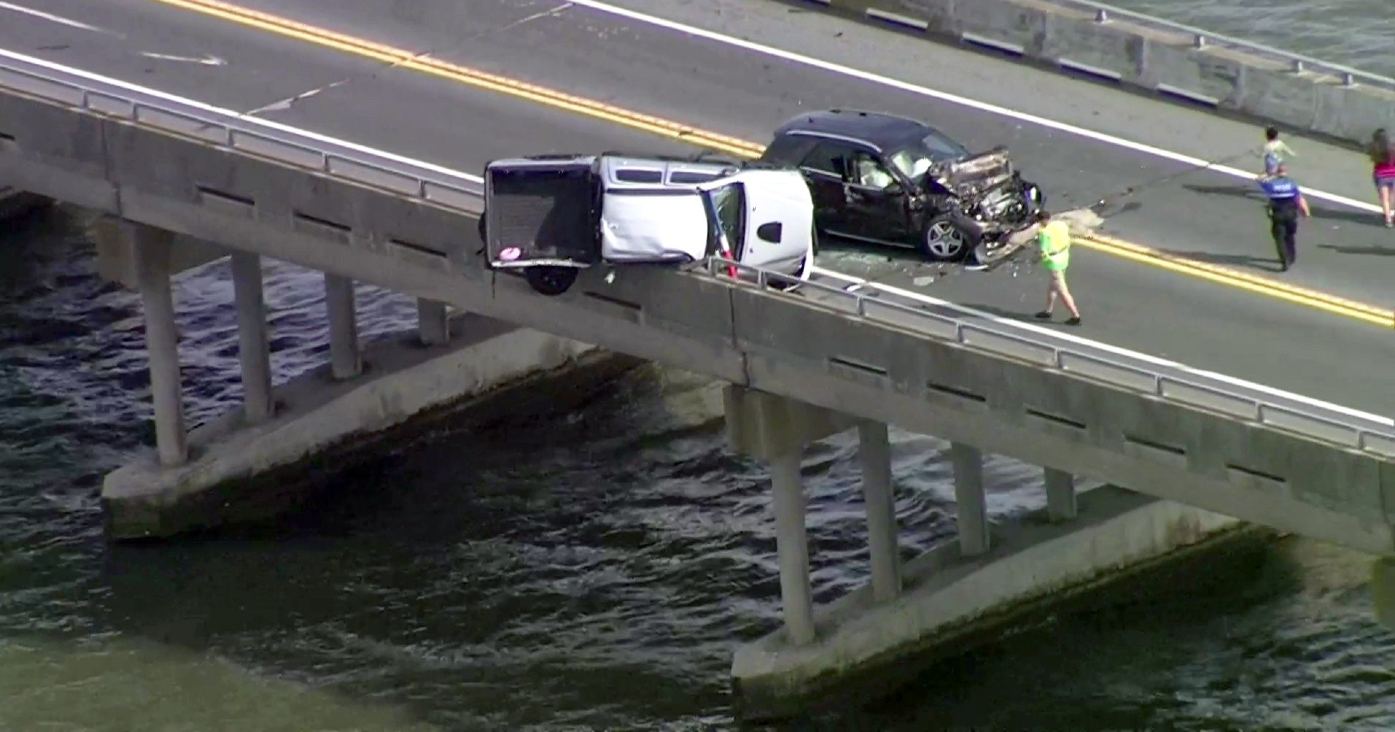 Jonathan Bauer is afraid of heights, but that didn’t stop him from leaping off a bridge some 25 to 40 feet to the water below to save a little girl’s life.

On May 2, Bauer and his teenage daughter Ava were running errands when they got caught in a serious five-car pileup on the Route 90 bridge over Maryland’s Assawoman Bay. The accident sent eight people to the hospital and left a pickup truck dangling precariously over the guardrail.

After making sure Ava was okay, Bauer got out of his car to see if anyone needed help. As he headed toward the teetering truck, its passenger alerted him to a heart-wrenching sight—a toddler, ejected from the passenger side, was floating in the bay, her pink dress billowing in the waves.

“I looked over and I saw the car seat, some other items, and then about six feet away from the car seat, I saw the little girl and she was on her back floating perfectly on her back, arms moving, legs kicking,” Bauer said, as reported by WJLA.

Scanning the water for nearby boats that might be able to help, Bauer found none close by. When he turned his attention back to the little girl, he saw she was in trouble. “She had flipped over onto her stomach and her face was in the water,” he said.

Bauer yelled to his daughter to pull over the first firefighter or paramedic she saw. Then he simply peeled off his shoes and jumped in, feet first.

MORE: He Saved a Stranger From Drowning in India, Now They’re Married in the Netherlands

Surfacing without injury, he swam to the toddler, who appeared to be only semi-conscious. Hefting the child over his shoulder, he patted her back until she started to cough and expel the water from her system.

Moments later, boaters Joe and Alayna Oertel, who’d witnessed the events unfold, arrived. After pulling Bauer and the 2-year-old to safety, the Oertels rushed the pair to the 66th Street ramp where they were met by waiting paramedics.

The little girl was airlifted to Johns Hopkins Children’s Center in Baltimore for evaluation and treatment. (She’s since been released and is expected to make a full recovery.)

Bauer, overwhelmed by the experience, quietly slipped away without taking credit for his brave actions. Even after reports of the incident went public, he initially tried to keep his involvement quiet, preferring to remain an anonymous good Samaritan.

CHECK OUT: Trucker Hero Pulls Over When He Sees ‘Frantic’ Man Running Up Highway After Wreck Flings His Toddler into the Dark

His community, however, was determined to show its appreciation. They got their wish.

On May 7, in a “kitchen table” press conference held at Ocean City’s Fire Station 3, Bauer was reunited with Joe and Alayna Oertel and a number of the first responders who were on the scene that day. Also in attendance, along with wife Wendi and daughter Ava, were City Council President (himself a volunteer firefighter) Matt James and Ocean City mayor, Rick Meehan.

During the event, an emotional Bauer recounted his experiences of the fateful events. While he was heaped with praise and even awarded a plaque to commemorate his heroism, it was clear having saved a life was all that truly mattered.

“Jonathan’s truly a humble hero and that’s what makes this even more special than it already was,” Mayor Meehan said, including Ava in his accolades as well. “This is a day of thank yous. This was a really tragic accident… [but] the ending of the story is everyone is okay, and they’re okay because of everyone in this room.”

(WATCH the TODAY video about this story below.)

RESCUE Hope In Your Friends—Share This Good News Story…

Mountains of Garbage in Russia are Being Turned into Fashionable Accessories

Looking to Adopt a New Pet at the Shelter, She Found Her Dog That Went Missing 2 Years Ago