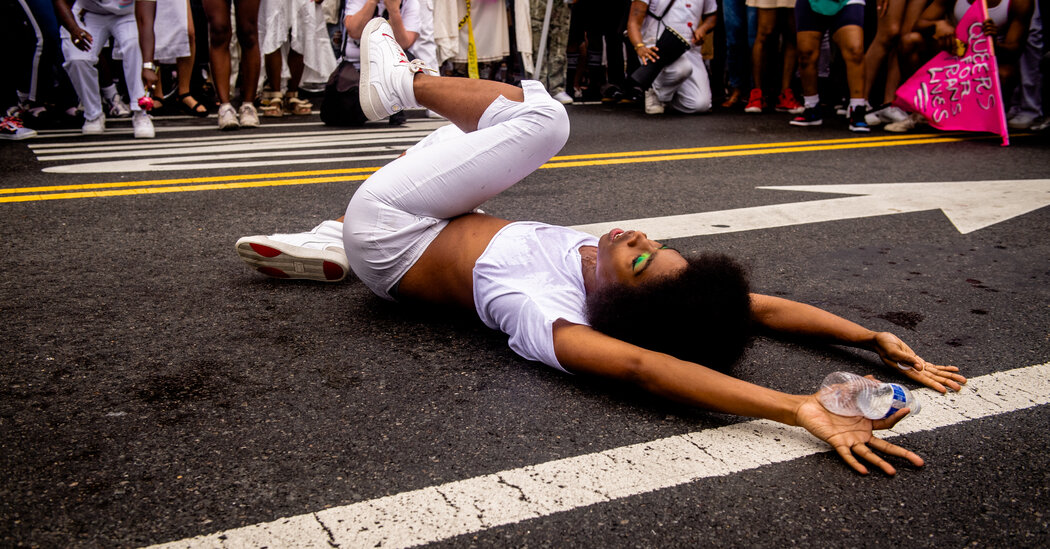 When thousands gathered in Brooklyn last summer to participate in a march for Black trans lives, Shéár Avory was at home, helping to care for their family in the middle of the coronavirus pandemic. But Mx. Avory, who is transgender and nonbinary, was heartened by what they saw online: images and videos of a sea of people, dressed in white, rallying for their community.

“I remember being so connected to community, even virtually,” Mx. Avory, 22, said. “And just feeling this overwhelming sense of, ‘Well, we did that.’”

On Sunday, several thousand people once again gathered in front of the Brooklyn Museum for the Brooklyn Liberation march. This time, Mx. Avory was addressing them, calling for solidarity and action to support Black trans and gender-nonconforming youth at a rally intended specifically to center their voices and concerns.

“We are here to claim space,” Mx. Avory said to a crowd that cheered them on. “We are here to say that we have a right not just to survive, but to thrive; to demand that our movements show up and center us.”

The crowd this year assembled for a demonstration in the middle of a Pride month rife with debates over the role protests should play in celebrations of L.G.B.T.Q. identity. They came together to show support for transgender and gender nonconforming youth at a moment that organizers described in their mission statement as a “state of emergency.”

“We’re Black and trans, and I would’ve liked more protecting as a child,” said Wes Garlington, 25, of Brownsville, Brooklyn, who attended the rally with their partner. “So we came out to show support.”

In state legislatures across the country, Republican lawmakers have introduced bills to limit the participation of transgender children in sports and hinder their access to gender-affirming or transition-related medical care. At least 10 have been signed into law this year.

Schuyler Bailar, who competed on a Division I college swim team as an openly transgender man, said that the flurry of legislation was exhausting and disheartening.

“Trans youth absolutely deserve to play sports just like I did, just like I do,” said Mr. Bailar, who described himself as a queer Korean American transgender man of color. “Trans kids deserve that space.”

At the same time, the pandemic worsened economic inequities that had already put people of color and trans people at severe economic disadvantage, and persistent violence against transgender people has not abated.

At least 28 transgender or gender nonconforming people have been killed in the United States so far this year, according to the Human Rights Campaign, putting 2021 on pace to be one of the worst years on record for anti-trans violence. The victims were overwhelmingly Black and Hispanic trans women.

Raquel Willis, a Black transgender activist and one of the march’s organizers, said there were links between the violence, which the American Medical Association has called an epidemic, and the bills being debated and passed across the country.

The legislation, she said, threatened to erase young trans people’s control over their bodies and their identities and would have lasting effects on them.

“When we talk about the epidemic of violence plaguing Black trans women and brown trans women, that is so tied to the violence and the psychological distress that trans youth are facing,” Ms. Willis said.

The first Brooklyn Liberation march, held last year, was born in part from protests after the death in 2019 of Layleen Polanco, a transgender woman who died while in solitary confinement at Rikers Island after she had a seizure and guards failed to check on her.

The event followed a wave of demonstrations against police brutality and systemic racism that were organized in response to the killings of George Floyd, Breonna Taylor and Ahmaud Arbery, among many others.

Organizers sought to create a striking show of solidarity for a group marginalized not just by society but often by the L.G.B.T.Q. and racial justice movements.

The enormous turnout last year, which organizers estimated at 15,000 people, exceeded their expectations. But they knew that one rally would not solve issues that have for decades gone unaddressed.

“When we showed up last year in the interest of elevating Black Trans lives, I think all of us knew that this was going to be an ongoing commitment,” Ms. Willis said.

But this year, Ms. Stewart said, they wanted to give the spotlight to younger voices, those who would be the next generation of activists and leaders and whose formative experiences were different from theirs.

“We are ready for this new generation of youth who are coming up and defining themselves by things that are much more complex and much more deep,” Ms. Stewart said.

The six speakers at the march on Sunday, all of whom were 25 or younger, said they hoped to reaffirm the humanity of trans youth, who too often had been defined by the challenges they faced rather than their resilience.

“Trans and G.N.C. youth who are living in, and living for, their truth are showing us that we take our power back in our openness with each other and with ourselves,” said Lafi Melo, 25, a Palestinian American artist and activist.

Mx. Avory pointed to a long legacy of young trans organizers who were at the forefront of activism in their time, including Marsha P. Johnson and Miss Major, transgender women whose participation was integral in the Stonewall uprising that helped cement the modern L.G.B.T.Q. movement.

For young people to take the stage at a rally like Brooklyn Liberation “feels really affirming and empowering,” Mx. Avory said. “And it feels like it’s about damn time, honestly.”

The crowd this year was more modest than last year’s, reflecting in part a diminished energy around protesting as New York City has opened up with the easing of pandemic restrictions and as some of the conversations around racial justice have begun to recede.

“Interesting what being vaccinated and what bars being open will do to showing up to these kinds of events,” Mx. Garlington said. “People have more options and there’s less pressure.”

Their partner, Yaya, added, “There’s not as much guilt in the air.”

But more than two thousand people, by organizers’ estimates, still turned out to listen to the speeches in front of the museum, before marching about a mile and a half to Fort Greene Park.

Senna Mamba, who attended last year’s event and this year’s, said that the march was a welcome moment of relief and solace for her amid her struggle to find a community. As a Black trans woman, she has faced discrimination in the workplace, and she has struggled to build relationships while living in a homeless shelter.

Even in New York City, a liberal bastion which has sought to be in the vanguard on L.G.B.T.Q. rights, young trans people face significant disadvantages. They struggle to find housing and meaningful employment, are more likely to have negative interactions with the police and experience higher rates of violence.

“We will not allow for any systems to continue to brutalize, to demonize, to continue to criminalize the most marginalized people,” Qween Jean, a Black transgender costume designer who has been helping lead weekly protests at the Stonewall Inn, said at the rally. “It must end now.”

Mx. Avory said that they hoped the march this year would inspire trans youth across the country, and remind them that they had long been foundational to the L.G.B.T.Q. and social justice movements.

For Bri Joy, 24, who is Black, trans and nonbinary and just moved to New York from Atlanta a week ago, the march offered an inspiring opportunity to connect with their new community — and what they described as their soon-to-be family.

“There’s this rumble, this really big energy that only trans and queer people can provide that I can just sit in and exist in and meditate through,” they said. “It’s hard to put into words, but it is just so beautiful.”

Anthony Weiner’s Not Coming Back. But He Has Nowhere to Go.

Influencers Find Welcome in Paradise, While the Rest of Us Watch From Lockdown

Environmental News Network – Record-Setting Rain and Heat? This Is the New Normal

The Curious Case of the Cinnamon Toast Crunch Box