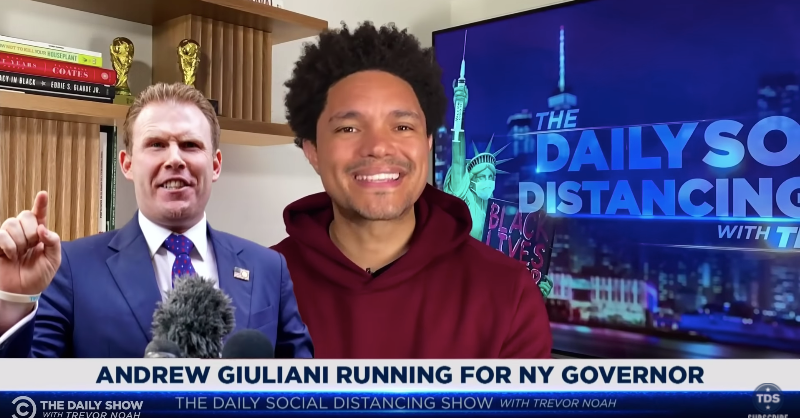 Rudy Giuliani’s son, Andrew, announced his candidacy for governor of New York on Tuesday. The “Daily Show” host is surprised that he wants the job.

“Bush, Clinton, Cheney, Kennedy, Cuomo — it’s almost like America fought the Revolution to say, ‘We don’t want a king, we want, like, six to eight kings, and they can rotate!’” Trevor Noah said on Tuesday.Credit…Comedy Central

On Tuesday, Andrew Giuliani announced he would run for governor of New York. Mr. Giuliani, whose father Rudy Giuliani has been New York City’s mayor, Donald J. Trump’s lawyer and the subject of a federal investigation, promised “record-setting crime reduction, which I think the Giuliani name is certainly associated with.”

“The Giuliani name is associated with crime reduction? I mean, I guess if one person is personally doing all the crimes, that does reduce the number of criminals,” Trevor Noah said.

“But, yeah, Rudy Giuliani’s son is running for governor off of his dad’s name. And it’s not a bad move, I mean, considering how much Americans love political dynasties. Bush, Clinton, Cheney, Kennedy, Cuomo — it’s almost like America fought the Revolution to say, ‘We don’t want a king, we want, like, six to eight kings, and they can rotate!’” — TREVOR NOAH

“Andrew Giuliani, if you don’t know much about him, he is a former professional golfer, which is good. That way, when he gets the lowest number of votes, he’ll think he won.” — JIMMY KIMMEL

“What surprises me is that any politician’s kid would want to go into politics. Yo, man, personally, I would steer clear of any job that turned my dad into a melting piece of licorice. I don’t want none of that action.” — TREVOR NOAH

“But, of course, Andrew Giuliani isn’t just running as the son of America’s only living gargoyle, he’s also running off his extensive experience as President Trump’s sports liaison. And I know some people think, sports liaison? Sounds like a [expletive] job, like influencer or consultant or astronaut. But, personally, I think he crushed it as the sports liaison. I mean, who do you think helped Trump get the championship teams all of those cheeseburgers, huh? You think it’s easy explaining to Uber Eats that ordering 500 burgers was not a mistake?” — TREVOR NOAH

“Right now Jay-Z is like, ‘Thank God I sold my piece of the Nets.’” — JIMMY FALLON, after showing a clip of Bill de Blasio in Brooklyn Nets gear at a news conference

“Got the classic basketball fan outfit: hat, jersey and a blue button-down over the jersey.” — JIMMY FALLON

“He looks like a guy who sits courtside and can’t get any high-fives from the players.” — JIMMY FALLON

“I think the only explanation for that is it was done as a joke by his staff, who hates him very much.” — JIMMY KIMMEL

Chris Rock and 21 Savage played a round of “True Confessions” on “The Tonight Show.”

The “Shrill” star Patti Harrison will be on “Late Night” to talk about her new film with Ed Helms, “Together Together.”

ImageJean Smart plays a celebrity comedian in “Hacks,” her latest prestige TV role in what has been a professional renaissance.Credit…HBO Max