To Respond to Rising Sea Levels, The Maldives is Building a Floating City 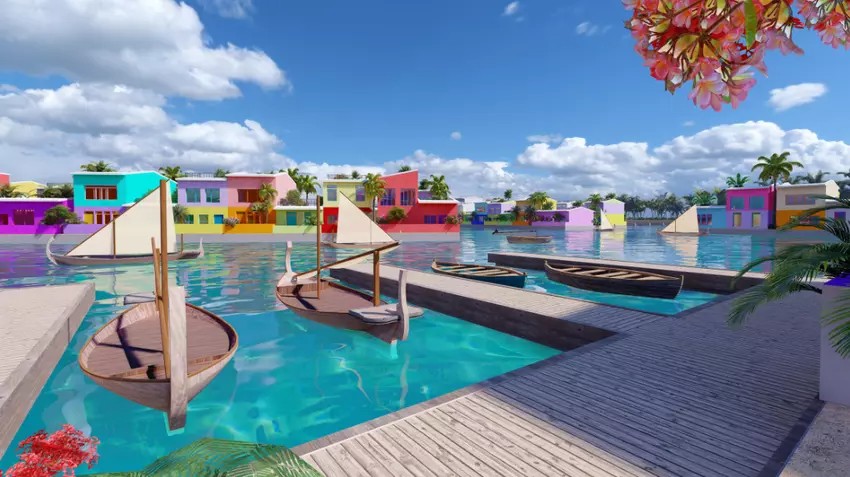 Late 19th and early 20th century fiction was filled with visions of a brave new world where science, technology, and machinery would come together to build metropolises under the sea, floating in the air, or out in space.

Now a Dutch planning and architecture firm is working with the Maldives to create a 200-hectare floating city. It’s modeled on the structure of coral reefs and powered by green energy to help fortify the nation against climate change.

Averaging less than 1 meter above sea level, the Maldives, a collection of 25 atolls in the Indian Ocean, is the lowest-lying nations on Earth and at a real risk of becoming uninhabitable as the planet warms.

Fortunately, with 300 years of Dutch know-how on controlling their wet environments, Dutch Docklands is working with the Maldives government to create a solution.

Planned to drift upon a 200-hectare warm water lagoon just a 10-minute boat ride from the capital of Malé, the Maldives Floating City (MFC) will be built along a flexible grid and surrounded with larger islands to act as wave and water breaks.

“As a nation at the front-lines of global warming, the Maldives is perfectly positioned to reimagine how humankind will survive—and, indeed, thrive—in the face of rising seas and coastal erosion.”

MORE: Saudi Arabia is Building a Zero-Carbon City With No Cars or Pollution: ‘A new era of civilization’

Rather than industry or agriculture, the Maldives is powered by tourism, and the hexagonal, modular building segments are inspired by the rich corals that attract the visitors that fuel the country’s economy.

The plan also includes the building of artificial coral structures in and around the neighborhoods to attract sea life, and further protect the town from storm surges.

“Our adaptation to climate change mustn’t destroy nature but work with it, as the Maldives Floating City proposes,” said Mohamed Nasheed, former president of the Maldives and speaker of parliament. “In the Maldives, we cannot stop the waves, but we can rise with them.”

The housing modules will be connected by a series of canals and flexible bridges, while docks will allow people parking and access to services and shops. Construction is slated to begin next year, and finished in five.

RELATED: Eco-Friendly Behavior In This Finnish Town Gets You Free Cake

A school and hospital will be added, a renewable energy grid will power the city, and prices for homes are said to be set to accommodate all income brackets.

(WATCH the project launch video for Maldives Floating City below…)

SHARE the Innovative News With Pals on Social Media…

The cause and effects of fourth wave of pandemic in Delhi

Even when women outnumber men, gender bias persists among science undergrads: Is representation enough to improve gender diversity in science? A new study says there’s more to the story