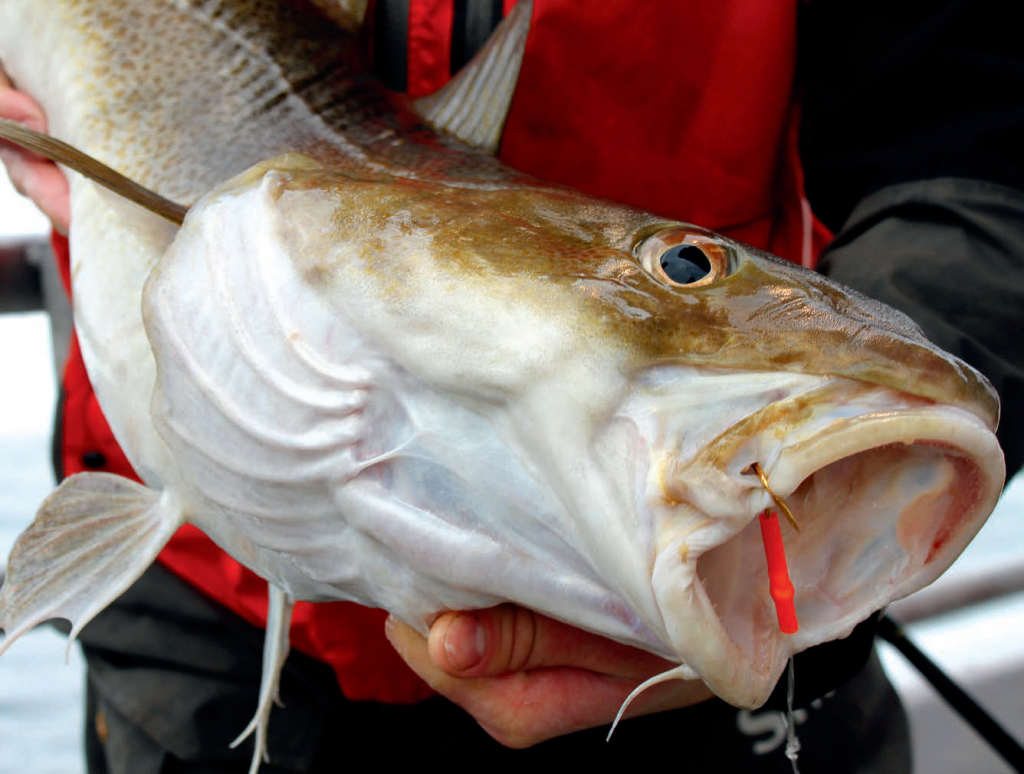 While the plight of Atlantic cod in the northeast is well known, the emergence of a fishery off southern New England has puzzled scientists, but delighted anglers.

These days, it’s common knowledge that Atlantic cod are in bad shape, and dramatically so. Based on 2019 stock assessments, both the Gulf of Maine and Georges Bank stocks continue to be overfished and the groundfish fishery north of Cape Cod has shifted to focus predominantly on haddock and pollock.

Head a bit south, however, and a different picture emerges. Over the past 10 or so years, cod have found a foothold in the waters offshore of Block Island. During the winter months, feeding aggregations have turned into spawning aggregations, and anglers travel from far and wide to sail aboard party and charter boats from Point Judith and Montauk in pursuit of the bright, white-bellied bounty. No, they aren’t the 40- and 50-pound steakers of old, but healthy market-sized fish, with enough in the 20-pound range—a noteworthy catch these days—to keep things interesting.

It’s a pleasant surprise for anglers, but a puzzle for fisheries scientists, especially given that the region from New Jersey to Rhode Island represents the southernmost range of cod anywhere in the Atlantic. As coastal waters warm, cod in these southern haunts should be especially vulnerable to climate change impacts, yet this fishery is hanging on and even strengthening. Adding to the confusion is the fact that federal fisheries trawl surveys rarely capture cod in this region, and that while cod in this area are managed as part of the Georges Bank spawning stock, the fishery here is doing better than in other parts of the management unit. New research is helping scientists and managers learn more about the dynamics of this southern cod abundance, and whether it represents a separate, self-sustaining population.

New research suggests that southern New England’s cod, like this chunky specimen displayed by Kevin Cheung, may represent their own separate spawning population.

“As an undergraduate at the University of New England in Maine, I learned that Gulf of Maine cod were in really rough shape due to a combination of overfishing and climate change,” explains Joe Langan, a PhD candidate at the University of Rhode Island’s Graduate School of Oceanography (URIGSO). Imagine his surprise, then, when upon beginning his PhD studies in 2015, he learned of a burgeoning local cod fishery that winter. “Party-boat anglers were limiting out, and with all of the herring inshore, some guys even caught cod from the beach. Fishermen were saying that it was the best fishing they’d seen since the 70s, but all I could think was, ‘This can’t be!””

Langan’s graduate research focused on winter flounder, but he just couldn’t get away from cod. “We were conducting larval surveys for winter flounder in Narragansett Bay, but kept catching cod larvae, all the way up toward the city limits of Providence.” The discovery prompted Langan and his colleagues to take a slight detour from winter flounder research and explore past years of survey and fishery data to better understand the life history and abundance of Rhode Island’s cod. 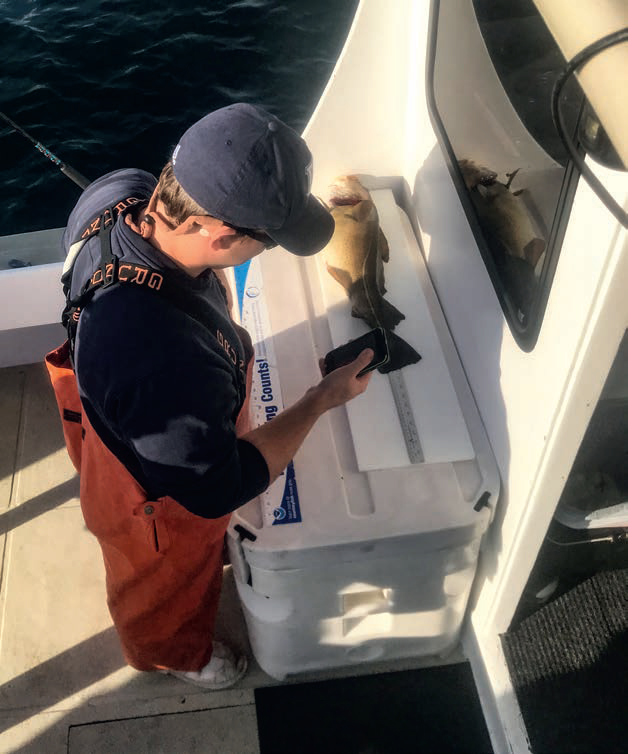 Joe Langan, PhD candidate at the University of Rhode Island’s Graduate School of Oceanography, found that the number of young-of-year cod caught off Rhode Island in a given year was a significant predictor of commercial and recreational fishery catches two years later.

The team examined the catches of larval fish and trawl surveys conducted by Rhode Island’s Department of Environmental Management (RIDEM) and URIGSO. The larval surveys, done in Narragansett Bay, have taken place on and off since 2001, but elements of the trawl surveys, which take place in Rhode Island state waters and sample young-of-year (less than 8 inches), juvenile (8-15 inches), and adult (greater than 15 inches) cod, have occurred since the late 1950s, providing the research team with a rich dataset. The scientists then modeled how environmental conditions like temperature and rainfall might affect the abundance of cod. To understand how survey findings might relate to what fishermen are seeing on the water, the research team also examined recreational and commercial catch data from the area collected through the NOAA Fisheries Marine Recreational Information Program (MRIP) and NOAA’s Vessel Trip Report (VTR) Program.

Langan and his colleagues found that the abundance of young-of-year cod detected in the trawl survey began increasing in 2002. Moreover, they discovered that the number of young-of-year cod in a given year was a significant predictor of commercial and recreational fishery catches two years later—when those fish approached keeper size. For example, folks may remember the Rhode Island cod bonanza of 2011, which was preceded in 2009 by the highest young-of-year abundance ever detected since the RIDEM trawl survey’s inception in 1979. This suggests that the fish being caught come from juveniles in the same area, not adults migrating from elsewhere. In other words, what the research team found matches what fishermen have been seeing on the water over the last 20 years. “We don’t know exactly why they came back, but they certainly have, and all data sources bear that out,” Langan notes.

It wasn’t, however, just young-of-year cod that helped tell the story. “We’re seeing all stages of Atlantic cod off the coast of Rhode Island—larvae at first hatch, older larvae, young-of-year, juveniles, and adults. That’s pretty strong evidence that these southern New England fish likely represent their own spawning population,” Langan says. He notes there is evidence that some larvae found in the region could come from the western Gulf of Maine; however, given the presence of newly-hatched larvae in Narragansett Bay, the research team is confident that at least some reproduction is local. 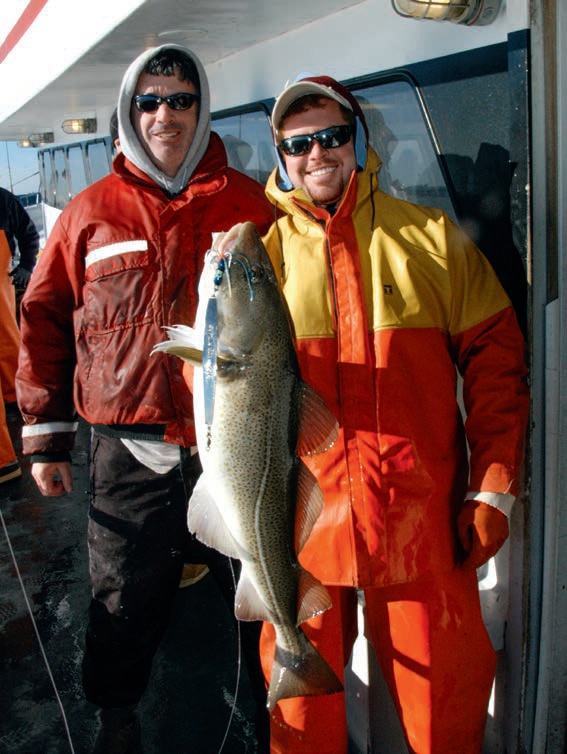 While anglers have enjoyed respectable cod catches off southern New England in recent years, the fishery’s future is in question as waters continue to warm as a result of climate change.

Langan’s results, which suggest a self-sustaining southern New England cod stock, align with the findings of an ongoing cod stock structure research program led by NOAA Fisheries and Canada’s Department of Fisheries and Oceans, which has identified five distinct spawning stocks, including one in Southern New England. Indeed, it adds to an ever-growing body of research, which includes morphometrics (analyzing the relative shapes of fish), tagging, and genetics, further indicating that Southern New England’s cod may be distinct. How to reconcile this new research with the current two-stock management of Atlantic cod (Gulf of Maine and Georges Bank) remains to be seen.

The story that Langan’s research revealed for southern New England’s cod was not all rosy. “We detected a strong negative correlation between the bottom temperature in February and the abundance of young-of-year cod,” he says—in other words, the warmer the temperature, the fewer young cod. And six of the 10 warmest Februarys ever recorded by the URIGSO trawl survey have occurred since 2002, the year that cod numbers started to increase. As waters continue to warm, adult cod may have a tougher time too, due to a combination of inhospitably warm temperatures in the fall and the increased local abundance of competitors like black sea bass.

For now, however, cod appear to be hanging on in the region, providing a ray of hope for this beleaguered species and an opportunity for managers to reconsider the assumptions used in an effort to conserve and rebuild cod stocks in a warming ocean.