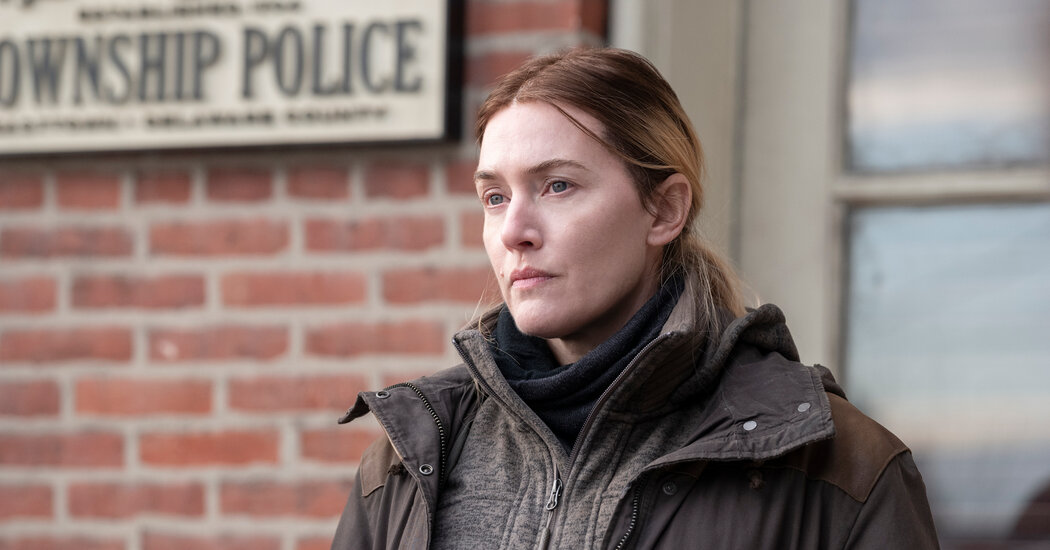 In “Mare of Easttown,” the “Mildred Pierce” star plays a damaged detective trying to stay afloat while investigating missing and murdered young women.

It’s nice that HBO has turned out another handsomely produced, manifestly serious mini-series for the wonderful actress Kate Winslet. It would be nicer if those series were worth her time and talent.

The latest, following the languorous curio “Mildred Pierce” from 2011 (her only previous American series), is the seven-episode “Mare of Easttown,” which premieres Sunday night. Winslet plays Mare Sheehan, who lives with four generations of her family and works as a police detective in the Pennsylvania town where she grew up. She was once a local hero, her glory day having come in a high school basketball championship game.

Mare’s fortunes have fallen since then, in a truly Job-like fashion. She’s a walking damage report: loved ones lost to suicide, a son who hated her, a heroin-addicted daughter-in-law fighting her for custody of her grandson. Although we can see that she’s a talented and dedicated cop, her town sees her as incompetent because she hasn’t found a local girl who went missing. And the anger and guilt she’s carrying make those suspicions come true, pushing her into rash, dangerous decisions.

And it’s not just Mare — nearly every character in the crowded cast is tragic to some degree, from the cancer-patient mother of the missing girl to the priest with a dark secret to Mare’s best friend, whose apparently harmonious marriage is anything but.

This has to be so because “Mare of Easttown,” which was created and written by Brad Ingelsby and directed by Craig Zobel, is in the tradition of Middle American miserabilism, a genre HBO has cultivated before in “I Know This Much Is True” and other series.

They’re shows that aren’t about much of anything besides their characters’ despair and the painstakingly rendered small-town or suburban milieus that inevitably cause it. In “Mare of Easttown,” which takes the form of a crime drama, the fruits of middle-class American life include addiction, adultery, beatings, abduction, rape and murder, and that’s just in the five episodes available to critics.

Some style in the direction or honest feeling in the screenplay could have mitigated the dreariness, but “Mare” doesn’t offer much beyond Ben Richardson’s burnished cinematography. The moments of fright and danger don’t have much force, and the psychological and sociological framework surrounding the mystery (which grows to involve several other missing or dead girls) doesn’t deliver the emotion it needs to.

The script doesn’t give Winslet enough to do beyond suffering and lashing out, even in the scenes where she is warily courted by a fellow detective (Evan Peters) and a writing teacher (Guy Pearce) who, like Mare, has seen better days. She spends an awful lot of her screen time delivering a hard stare into the middle distance, like someone playing an archetype (or a sculpture) rather than a real character.

When she gets to do something else, Winslet reminds us of what a capable performer she is. She deftly projects Mare’s fear and panic in a scene where the routine questioning of a suspect suddenly goes wrong. And she is allowed some clipped humor in exchanges with Mare’s disgruntled mother, Helen.

Jean Smart, in her wearily suffering mode, is one of the show’s pleasures as Helen; Pearce, Julianne Nicholson as Mare’s best friend and John Douglas Thompson as the police chief all make you wish they had larger roles.

But the odd, brief detours the show makes into comedy with Smart’s character — they’re signaled by a light, tinkling music, in case we don’t catch the awkward tonal shifts — are representative of a coarseness, or clumsiness, that keeps cropping up in the storytelling. It’s there in a scene that brings together two of the show’s saddest characters, in violent fashion, for no discernible dramatic purpose beyond an injection of outré melodrama. It’s very much there in the relief we’re supposed to feel when a subplot we’re led to believe is about child abuse turns out — whew! — to be about adultery instead.

It’s a good bet that Mare — bad mother, bad daughter, bad cop — will see some redemption by the end of the seven episodes, an outcome that begins to look likely around Episode 5. That may give Winslet more room to operate, but it probably won’t make “Mare of Easttown” any less obvious or colorless.

Tomas Estes, Who Put Tequila on a Pedestal, Dies at 75

From Best Friends to Platonic Spouses