Overlooked No More: Inji Efflatoun, Egyptian Artist of the People 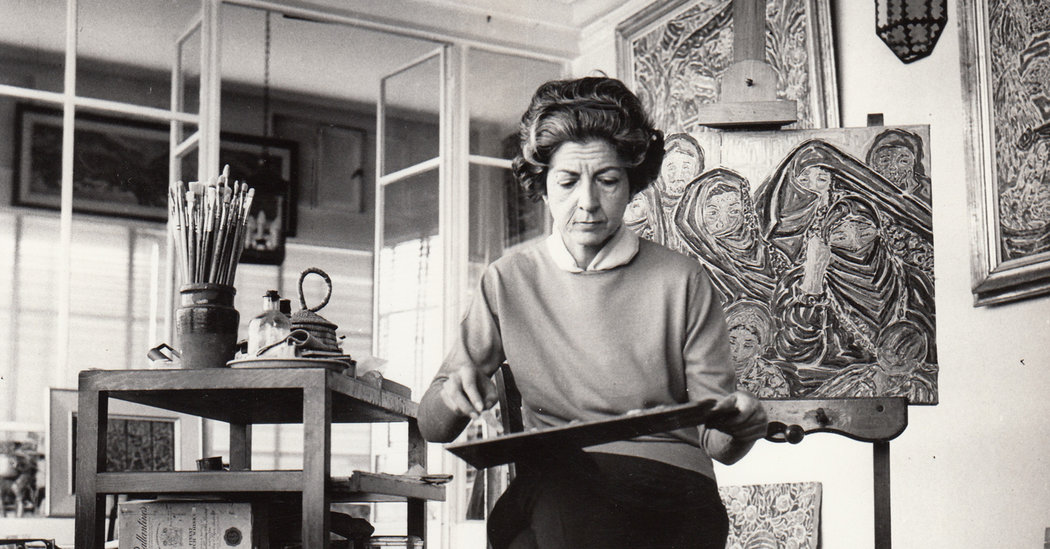 She was born into the aristocracy but became an activist for commoners while depicting social injustices in her paintings.

Inji Efflatoun in her studio in Cairo. She rejected her aristocratic background and painted the plights of working-class Egyptians.Credit…Safar Khan Gallery

This article is part of Overlooked, a series of obituaries about remarkable people whose deaths, beginning in 1851, went unreported in The Times.

It was while she was in prison that the Egyptian artist, feminist and political dissident Inji Efflatoun painted her best work.

Her portraits of imprisoned women — prostitutes, thieves, murderers, even activists like her, incarcerated as communists by the autocratic regime of President Gamal Abdul Nasser — are rendered in vibrant colors and thick outlines that capture her subjects’ feelings of isolation.

Her empathy was especially pronounced in her painting of a woman whose death sentence was postponed by a year so that she could breastfeed her newborn baby.

“I felt the massive tragedy of her story,” Efflatoun wrote in her memoirs, “From Childhood to Prison” (2014), “as she had killed and stolen under the pressure of extremely harsh conditions and overwhelming misery.”

Efflatoun’s paintings during her imprisonment, from 1959 to 1963, are among her most powerful bodies of work — “a window into a world that had been hidden from sight,” Sultan Sooud Al Qassemi, a visiting instructor at the Islamic Civilization & Societies Program at Boston College, said in an email.

But Efflatoun had been painting for many years before then. In fact, her art, deemed subversive by the authorities, had been instrumental in her incarceration — paintings of orphaned children lying beside their murdered parents and of enraged women with arms upraised, calling for the abolishment of Egypt’s autocracy.

One painting, “We Cannot Forget” (1951), most directly landed her in jail. It showed a sea of faces amid a row of coffins, a commentary on Nasser’s handling of Egypt’s bloody nationalist struggle against British control of the Suez Canal. Nasser had clamped down on critics of his regime, forcing Efflatoun to go into hiding. She veiled herself, dressed as a peasant and lived alone in close quarters, where she continued to paint. Still, she was caught by the police in 1959 and imprisoned for her communist activities.

The roots of her activism and feminism ran deep.

Inji Efflatoun was born on April 16, 1924, the younger of two daughters of an aristocratic family. Her father, Hassan Efflatoun, was a scientist who established a department of entomology at the University of Cairo. Inji had been inclined toward the arts from a young age and was encouraged by her parents.

“The girls would accompany their father on field trips,” Hassan Mahmoud, a distant relative, said in a phone interview. “Inji was great at drawing, so much so that he would ask her to draw the insects for him.”

Inji’s mother, Salha, was unusually independent for women of her day. She divorced her husband at 19, went to Paris to study fashion and opened her own boutique, Maison Salha.

Inji was enrolled at the prestigious College du Sacré-Coeur, a French Catholic institution in Cairo that was known for disciplining its students. She called it “my first prison.” The school’s strict rules and overt discrimination — Egyptian nuns were delegated more work than their foreign-born counterparts — fueled her rebelliousness, leading her to defiantly read books that the school had banned. She later attended the more liberal Lycée Français du Caire, where she learned of Rousseau, Voltaire, the French Revolution and Napoleon’s invasion of Egypt.

Marxist theories inspired her to reject her elitist background and stand with working-class Egyptians. And she began to see art as a form of liberation.

Efflatoun studied with Kamel El Telmissany, an artist and filmmaker who started the leftist Surrealist Art and Liberty Group.

“The group spoke against colonialism, denounced nationalism and worked for the emancipation of women and class elimination,” said Sam Bardaouil, who curated (with Till Fellrath) the traveling exhibition “Art et Liberte: Rupture, War and Surrealism in Egypt (1938-1948),” which debuted at the Centre George Pompidou in Paris in 2016 and included Efflatoun’s work. “These would become causes that Efflatoun would uphold for the rest of her life.”

El Telmissany also introduced her to Surrealism and Cubism.

“She had an anger and an urge to be set free as a result of her sheltered and privileged, cellophane-wrapped upbringing,” Fatenn Mostafa, an art researcher and the founder of the Cairo gallery Art Talks, said by email. “El Telmissany helped her translate this anger into surreal and imaginary powerful worlds that defy time and space.”

In 1942, Efflatoun joined Iskra, a Marxist youth group, and participated in Art and Liberty’s annual exhibition at the Continental Hotel in Cairo. Images of frightened women, eerie landscapes and coiled trees filled her canvases. For her, the tree came to symbolize the human condition.

“Trees are like people — suffering — and represent our dream spirits,” she told the artist and writer Betty LaDuke for a 1989 article in the journal of the National Women’s Studies Association. She added, “People wondered why a girl from a rich family was so tormented, so unhappy and refusing a lot of things.”

She began to feel a widening chasm between herself and her aristocratic upbringing and yearned to explore her roots. She made trips to Nubia and to the Nile Delta to paint farm workers and scenes of daily life there. In vivid paintings like “Fourth Wife” (1952) and “Ezba” (1953), men and women are hard at work — plowing, harvesting, weaving and selling their wares.

Her political convictions also came to be reflected in her art as she painted the plight of Egyptians suffering under despotism. She was named a delegate to the First Women’s International Democratic Federation in Paris in 1945 and wrote political pamphlets that addressed issues of class, gender and imperialist oppression.

In 1948, she married the lawyer Mohammed Abdul Elija, who shared her beliefs; he died in 1956. By then her art was being exhibited in Egypt and abroad, including at the 1952 Venice Biennale and the 1953 São Paolo Biennale. In 1952, Nasser led the overthrow of the Egyptian monarchy, and in 1959 his crackdown on communists led to Efflatoun’s imprisonment.

Behind bars, painting in cramped conditions, she created a side business, tipping prison officials so that they would wrap her canvases and smuggle them out to her sister, who then sold them.

“Prison was a very enriching experience for my development as a human being and artist,” she told LaDuke in the journal article. “When a crisis or tragedy occurs, one can become more strong or be destroyed. I became more open to people, to life. Before, I didn’t compromise. Now, if I see someone’s weakness, I accept it.”

Under Nasser’s orders, Efflatoun was freed in 1963 along with other political prisoners in advance of a visit to the country by the Soviet Premier Nikita S. Khrushchev.

A year later, Efflatoun held a solo show at Cairo’s Akhenaton Gallery and received a grant from the Ministry of Culture. Exhibitions in Rome, Paris, Dresden, Warsaw, Moscow and several other European cities followed.

Al Qassemi, the Boston College scholar, called Efflatoun a “great artist who allowed us a glimpse into worlds that we may have otherwise remained ignorant of.”

An unvaccinated worker set off an outbreak at a U.S. nursing home where most residents were immunized.

2,000 years of storms in the Caribbean: Geoscientists create sedimentary archive with annual resolution