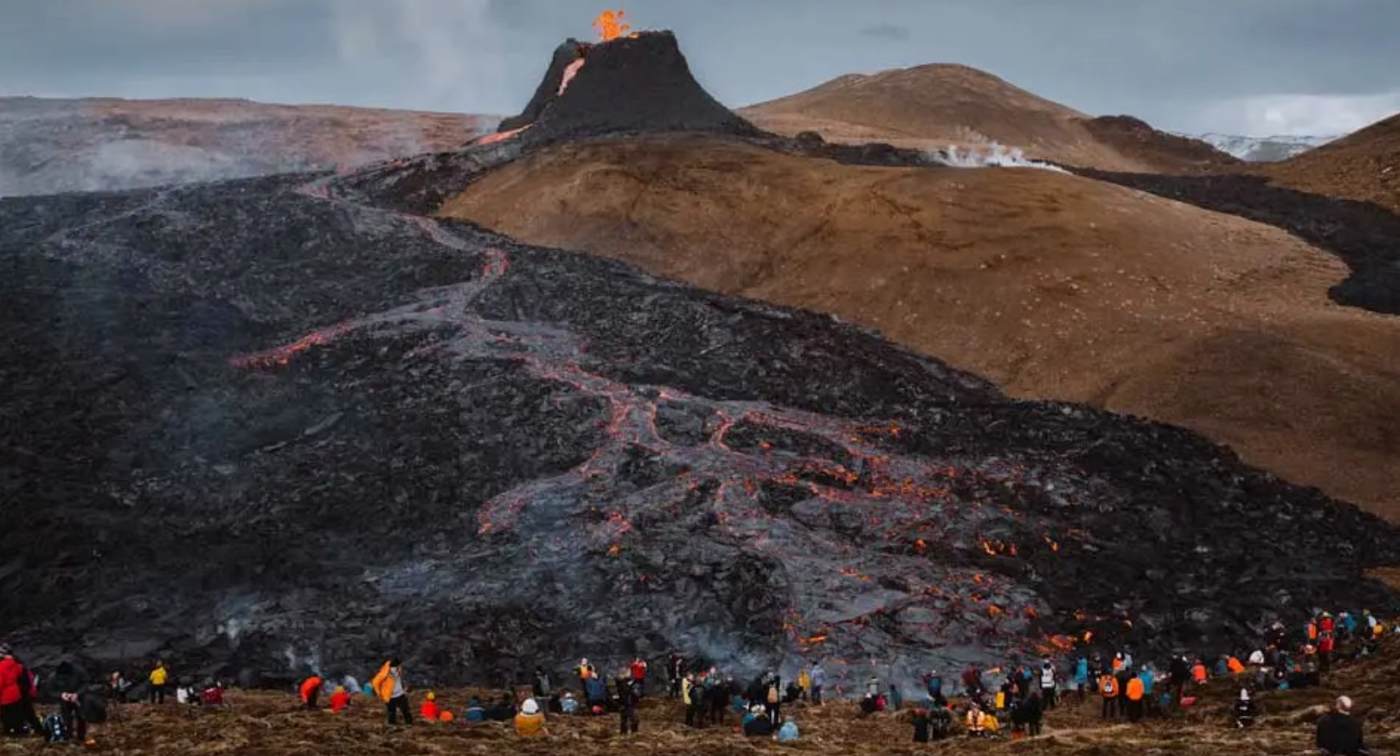 When the recent volcano eruption in Iceland proved to be substantially more harmless than first thought, people began to visit the crater to see what it was like.

For the first time in more than 800 years, Mount Fagradalsfjall began discharging molten lava after Iceland had experienced 50,000 earthquakes in the lead up, bracing locals for some nasty fire-weather.

While the site was originally blocked up, the complete lack of ash and pumice being spewed into the atmosphere eventually meant that thousands of people flocked to see this monumental force of nature in action.

Among those people were Donal Boyd and Frank Nieuwenhuis, a pair of photographers looking for an awe-inspiring moment of solitude with the volcano, and a chance for the shoot of a lifetime.

What they found was that rather than sitting in silence, connecting with the power of nature, listening to the wind and the narration of their thoughts, they had more or less attended something like a music festival.

Residents of Iceland since 2015, the two produced a short film entitled Volcano for the People, bravely choosing to devote their precious filming and screen time to the onlookers, with reflections of fire and wonder in their eyes. They hoped to capture the human element, which they felt made the eruption totally unique.

“They could go to this unique type of eruption that wasn’t explosive, that wasn’t spewing ash into the air, and they could sit there and just relax almost, and try to just take it all in,” says Boyd.

“The news spread so fast over social media, that the path formed [as] one footstep turned into five footsteps into 100, and before you knew it there were literally, I think by day four, or five, there were thousands of people going there a day.”

“People were calling it almost like a performance,” Boyd chimes in, speaking with GNN over Zoom. “Like you go to see some sort of festival and you’re all there together and you’re connecting to it and you’re like ‘oh yeah did you go to that festival?’”

“Some people have been there multiple times like ‘okay I’ve been to day four of Volcano-fest 2021, yeah did you go to day three? Yeah I was at day three,’” he said, pantomiming a conversation.

“What I felt was that everybody who came to that event was so happy to be able to be around people, and so when you saw that people were in need of help, people who were too old or too weak to do the hike, or people who had the wrong shoes, or people who didn’t have flashlights… people started helping each other,” said Nieuwenhuis of the camaraderie.

“I think really because of COVID, because we didn’t have people around us [for so many months], we were so much more appreciative to be around other people, and I think that maybe if there [hadn’t been] COVID, people would have been a bit more selfish there.”

A totally democratic natural phenomenon, the only controls placed on the event by Icelandic Search and Rescue involved shepherding people away from areas which were being bathed in noxious gases, but based on one of the most sacred laws of Iceland, there was nothing the government could do to prevent people from coming to see the volcano, since Icelanders have the “right to roam” on any uncultivated land they please.

“I actually think now, having experienced this with so many people, maybe before this event I would have been more selfish and I would have said ‘I know I wish this was more controlled and I would love to experience this by myself,’” said Nieuwenhuis. “But I actually hope that there’s going to be no restrictions except for safety, in the future.”

(WATCH the short film from Mount Fagradalsfjall below.)