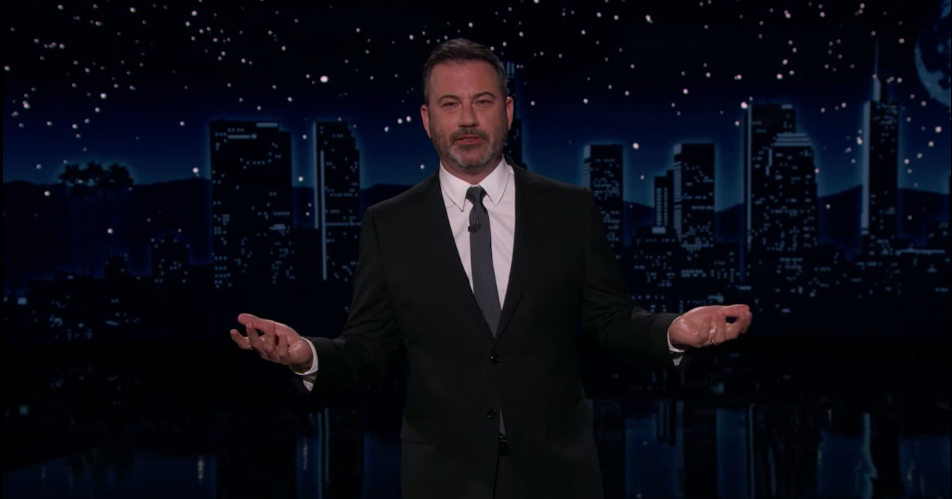 Kimmel poked fun at Gaetz and his friend Joel Greenberg for making their Venmo transactions public: “One of those ‘salads’ cost more than $1,000 — I guess they added avocado.”

“They didn’t check the privacy box. What’s the opposite of a criminal mastermind?” Jimmy Kimmel joked on Thursday.Credit…ABC

“Two of the transactions were for ‘stuff’ and ‘other stuff.’ And let me just say this: It’s bad enough that Matt Gaetz is implicated in doing ‘stuff.’ But ‘other stuff’? That’s outrageous.” — JIMMY KIMMEL

“And, of course, we know about all of this because stupid Joel Greenberg made his Venmo transactions public, as did Matt Gaetz. They didn’t check the privacy box. What’s the opposite of a criminal mastermind?” — JIMMY KIMMEL

“Chances are pretty high that if you’ve broken the law, there’s evidence of it on your phone, especially since Gaetz was reportedly using Cash App and Venmo to make payments to his indicted buddy. Used to be when politicians broke the law, they stuffed an envelope full of $100 bills and met their contact in a parking garage. Now they just Venmo a buddy with an emoji of an envelope stuffed with cash.” — SETH MEYERS

“I’d say along with getting your phone seized, being chased down a flight of stairs by a crowd of reporters and getting hustled into the back seat of a waiting car isn’t a sign that things are going great. That’s classic corrupt politician stuff. No one ever in that situation is in it for a good reason: ‘Sir, sir, can you tell us how you cured cancer?’ ‘I didn’t cure cancer; stop spreading lies about me. Now, if you’ll excuse me, I have to be rushed into this unmarked van.’” — SETH MEYERS

“In Canada yesterday, a member of Parliament, which is Canada’s equivalent to our House of Representatives, accidentally exposed himself on an official government Zoom meeting. His camera was on, he didn’t know it, and everyone saw his Canadian bacon.” — JIMMY KIMMEL

“This is the Canadian version of storming the Capitol.” — JIMMY KIMMEL

“People alerted him right after they took a million screen shots.” — JIMMY FALLON

“Before putting on pants, he was like, ‘It’s cold here today in Canada, isn’t it cold? Everyone’s talking about how cold it is.’” — JIMMY FALLON

“He was completely nude. He was changing after a jog, and thought his camera was off. From now on you can call me that guy’s camera because I am turned on.” — JAMES CORDEN

“The member of Parliament apologized and explained it was an innocent mistake — but also, if you want to see more, check out his OnlyFans page.” — JAMES CORDEN

“Of course, he apologized — he’s Canadian. He would have apologized whether it happened or not.” — JIMMY KIMMEL

“But can you imagine if this happened here? If Jerry Nadler started swinging his thing around on camera?” — JIMMY KIMMEL

“The Daily Show” detailed what it’s like for Black families to have “the talk.”

Intelligence Chiefs Warn of Russian Troops Near Ukraine and Other Threats

Review: ‘In Treatment’ Thinks You Could Use a Session, America