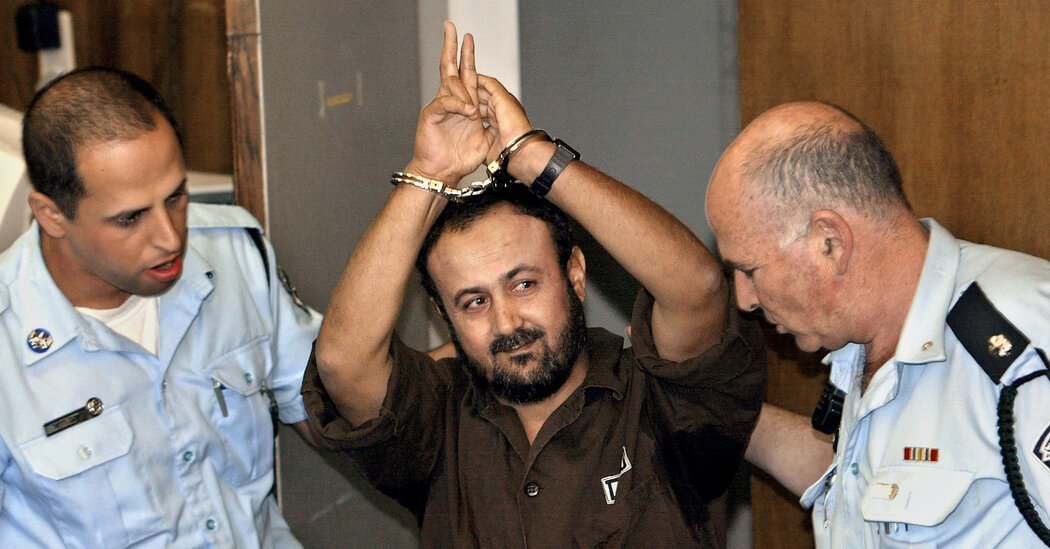 Marwan Barghouti, who is imprisoned for murder, filed his own candidates for the Palestinian elections, posing a challenge to Mahmoud Abbas, the Palestinian Authority president.

Marwan Barghouti, a popular Palestinian militant, during a court appearance in Israel in 2004.Credit…Pool photo by David Silverman

JERUSALEM — A popular Palestinian militant broke with the political party that controls the Palestinian Authority late Wednesday, escalating a power struggle and dimming the party’s hopes of retaining a monopoly on power in parliamentary elections.

The militant, Marwan Barghouti, 61, was long a revered figure in Fatah, the secular party that runs the Palestinian Authority and was co-founded by Yasir Arafat, the former Palestinian leader. Though serving multiple life sentences in an Israeli prison for five counts of murder, Mr. Barghouti commands considerable respect among many party cadres and is considered a potential future candidate for Palestinian president.

On Wednesday night, Fatah members acting on his behalf broke with the party, forming a separate electoral slate that will compete against Fatah in the elections in May and posing a direct challenge to Fatah’s 85-year-old leader, Mahmoud Abbas, president of the Palestinian Authority.

Mr. Barghouti’s faction joined forces with another longtime protagonist of Palestinian politics, Nasser al-Kidwa, a nephew of Mr. Arafat and a former Palestinian envoy to the United Nations, who split from Fatah this year.

Analysts believe their alliance could split Fatah’s vote, possibly acting as a spoiler that could benefit Hamas, the Islamist militant group that controls Gaza.

“This is a dramatic and major development,” said Ghaith al-Omari, a former adviser to Mr. Abbas and a senior analyst at the Washington Institute for Near East Policy, a research group in Washington. “This is as big of a challenge as can be raised to Abbas’s election strategy and more generally to his control over Fatah.”

Mr. Abbas, who has led the Palestinian Authority for 16 years, called for new elections in January in the hope of reasserting his democratic legitimacy and re-establishing a unified Palestinian administration. The authority manages parts of the occupied West Bank, while Hamas runs the Gaza Strip.

The authority has not held elections since 2006 for its parliament, the Palestinian Legislative Council. Mr. Abbas has repeatedly postponed them, at least partly because he feared losing to Hamas, which wrested control of the Gaza Strip from the Fatah-run Palestinian Authority in 2007.

Mr. Abbas hoped new elections might finally lead to reconciliation with Hamas. Instead, they have exposed a major power struggle within Fatah itself.

“This is one of the most significant political developments in Fatah since Abbas became president in 2005,” said Mr. al-Omari. “Barghouti and Kidwa are a combination that can’t be easily dismissed by the Fatah leadership. They have a very deep reservoir of legitimacy in the party and they represent a major challenge to Abbas’s hold on power in it.”

Mr. Barghouti ran for president of the Palestinian Authority in 2004, before withdrawing and supporting Mr. Abbas. He had been a leader of the Palestinian uprisings in late 1980s and early 2000s, and was convicted in 2004 for involvement in the killings of five Israelis.

He was sentenced to five life terms and campaigned for office from his jail cell.

Fatah’s supporters will now be forced to choose among three Fatah-linked factions — the official party, the Barghouti-al-Kidwa alliance, and a third splinter group led by an exiled former security chief, Muhammad Dahlan.

Members of Mr. Barghouti’s alliance said they had created the new faction to revitalize Palestinian politics, which has increasingly become a one-man show centered around Mr. Abbas, who has ruled by decree for more than a decade.

“The Palestinian political system can no longer only be reformed,” said Hani al-Masri, a member of the new alliance, at a news briefing on Wednesday night. “It needs deep change.”

A Fatah official dismissed the group as “turncoats.”

“Even with our prophet Mohammed, there were turncoats,” said Jibril Rajoub, the secretary-general of the Fatah Central Committee, at a separate press briefing outside in Ramallah, West Bank. “Fatah is strong and sticking together.”

Mr. Abbas has canceled elections in the past, and some believe he may seek to do so again in the coming weeks.

But at this point, a cancellation would be “very expensive, politically,” said Ghassan Khatib, a Ramallah-based political analyst and a former minister under Mr. Abbas. “There is a high political price for that.”

Mr. Abbas’s best hope would be for the Israeli authorities to intervene in the elections, Mr. Khatib said. Hamas has already accused Israel of arresting some of its leaders and warning them not to participate in the election, which Israel denies. And Palestinian officials say that the Israeli government has yet to respond to a request to allow voting in East Jerusalem.

This dynamic that could give Mr. Abbas a pretext to cancel the vote.

Mr. Abbas “needs an excuse that can justify such a decision,” Mr. Khatib said.

Amazon, Unilever, and Nestlé join the UK, US and Norway in New $1Billion Initiative to Preserve Tropical Rainforests