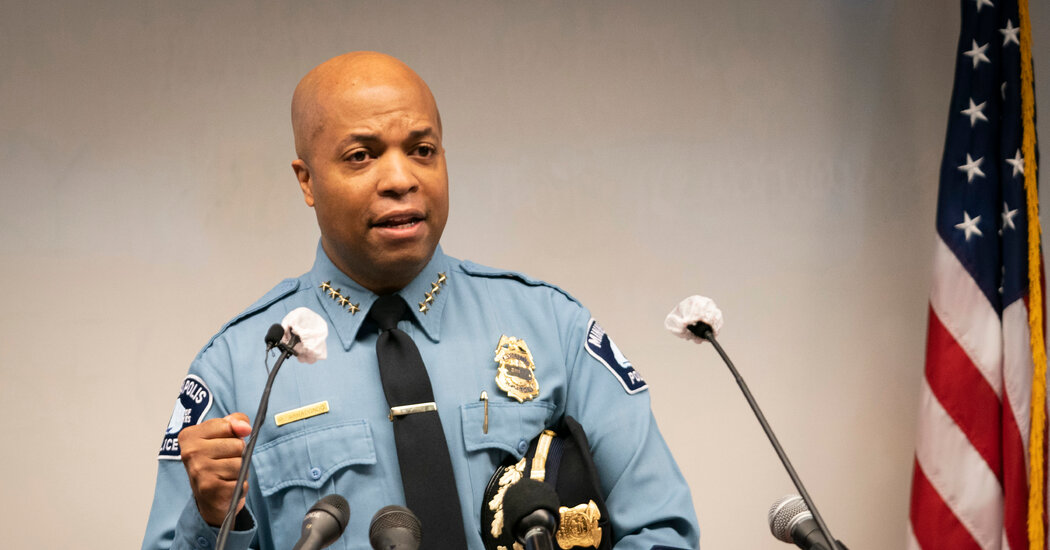 “To continue to apply that level of force to a person proned out, handcuffed behind their back — that in no way, shape or form is anything that is by policy,” Chief Medaria Arradondo testified.

Chief Medaria Arradondo of the Minneapolis Police Department in October. He testified on Monday against the former officer accused of killing George Floyd.Credit…Renee Jones Schneider/Star Tribune, via Associated Press

MINNEAPOLIS — The prospect that a police chief would take the witness stand against a fellow officer is exceedingly rare. But there was the chief of the Minneapolis Police Department on Monday, condemning the actions of Derek Chauvin, the officer charged with murdering George Floyd, as wrong by every imaginable measure.

“To continue to apply that level of force to a person proned out, handcuffed behind their back — that in no way, shape or form is anything that is by policy,” said the chief, Medaria Arradondo. “It is not part of our training. And it is certainly not part of our ethics or our values.”

The chief’s appearance, following testimony by two other Minneapolis police officials last week, underscored the difficulty that Mr. Chauvin and his lawyers will have in persuading the jury that the officer was just doing his job when he pinned Mr. Floyd to the ground with his knee for more than nine minutes last May.

Chief Arradondo said Mr. Chauvin’s actions might have been reasonable in the “first few seconds” to get Mr. Floyd “under control.” But, he said, “Once Mr. Floyd had stopped resisting, and certainly once he was in distress and trying to verbalize that, that should have stopped.”

The chief said Mr. Chauvin violated department policies on rendering medical aid, use of force, neck restraints and de-escalation, a strategy of using nonviolent measures to defuse situations before resorting to violence.

Chief Arradondo is the highest-ranking public safety employee to testify against Mr. Chauvin, with prosecutors also turning to Genevieve Hansen, an off-duty firefighter who tried to provide medical attention at the scene; Lt. Richard Zimmerman, the longest-serving officer in the Minneapolis Police Department; and Inspector Katie Blackwell, who at the time of Mr. Floyd’s death was the commander of the training division.

The chief’s testimony underscored the degree to which law enforcement groups have sought to distance themselves from the death of Mr. Floyd, which was captured on video and prompted condemnations from police officers, chiefs and unions across the country. Even Mr. Chauvin’s own union said he should have been fired.

ImageThe Third Precinct station of the Minneapolis Police Department has remained vacant since it was damaged during unrest following Mr. Floyd’s death.Credit…Joshua Rashaad McFadden for The New York Times

Criminal justice experts said the police chief’s testimony might upend a tendency on the part of juries to give police officers the benefit of the doubt when they make decisions on the job.

“Generally, you’re thinking that police departments are going to defend their police officers,” said David Schultz, a visiting professor of law at the University of Minnesota. “Getting the police chief to come in and say, ‘This is not what our practices were, these are not our protocols, these are not our standards’ — I have to think that’s got to weigh very heavily on a jury, in terms of them saying, ‘OK, I guess he wasn’t acting within that area of protected police activity.’”

The prosecution took Chief Arradondo through a painstaking recitation of his career, beginning with where he attended high school (Roosevelt High School, in Minneapolis), seeking to establish both his ties to the community and his law enforcement expertise.

They had him read copiously from the department’s manual, demonstrating that the policies within give officers specific factors to consider when deciding whether to use force. “Neck restraints,” for example, “shall not be used against subjects who are passively resisting,” the manual says.

Asked to recall his own involvement in the case, Chief Arradondo said he was at home on May 25 when he was informed that a man had been arrested who was not expected to survive. The chief notified the state agency that investigates police use of force, called the mayor and went to his office, where he watched footage of the arrest from a city-owned surveillance camera, which had no sound, was taken from a distance and showed the officers from the back.

Nothing from the video “jumped out at me,” he said.

But around midnight, he testified on Monday, he heard from a resident, who said, “Chief, have you seen the video of your officer choking and killing that man at 38th and Chicago?”

It was video taken by a bystander, close up, painfully graphic and showing the nine and a half minutes that Mr. Chauvin had his knee on Mr. Floyd. It spread across the internet, setting off protests over racism and police abuse across Minneapolis and in cities across the country.

The chief fired the four officers involved the next day, and soon referred publicly to the death of Mr. Floyd as a murder. Three of the officers will be tried at a later date.

Watching the trial at a laundromat near Cup Foods.Credit…Joshua Rashaad McFadden for The New York Times

Chief Arradondo joined the Police Department in 1989, an era when, he said on Monday, de-escalation “wasn’t mentioned.” As a lieutenant, he sued his own department for racial discrimination. In 2017, he became its first Black chief after his predecessor was forced out in the wake of a police shooting: Another officer, Mohamed Noor, was accused of murder in the fatal shooting of Justine Ruszczyk, who had called the police to report what she thought was a sexual assault of a woman in an alley behind her home.

In one of the few previous instances of a police chief testifying for the prosecution against an officer, Chief Arradondo took the stand in that case as well; Mr. Noor was ultimately convicted of third-degree murder.

On Monday, the lawyer for Mr. Chauvin argued that force is an unpleasant but necessary part of the job.

The lawyer, Eric J. Nelson, began his cross-examination of the chief by asking, “When’s the last time that you’ve actually — I don’t mean to be dismissive, but actually arrested a suspect?”

Throughout his questioning, Mr. Nelson focused on the proposition that the department’s policies gave officers leeway to decide what was best in the moment: “Ultimately, it’s not an all-inclusive list of considerations for the reasonableness of the use of force, agreed?”

Mr. Chauvin’s defense is paid for by the Minnesota Police and Peace Officers Association, an organization of unions that has agreed to maintain a legal defense fund to cover all union members who become targets of criminal investigations. Mr. Chauvin’s union, the Police Officers Federation of Minneapolis, is a member group of the association.

Testifying earlier on Monday, as the second week of the closely watched trial began, was Dr. Bradford T. Wankhede Langenfeld, an emergency room doctor who tried to resuscitate Mr. Floyd and later pronounced him dead.

Dr. Wankhede Langenfeld testified about what caused Mr. Floyd’s death, a central issue in the case. Mr. Chauvin’s defense team has suggested that Mr. Floyd had serious underlying conditions including heart disease and had ingested a high dose of opioids. The prosecution says he was asphyxiated by the police.

The doctor bolstered the prosecution’s case when he said that based on the information he had at the time, he thought that oxygen deficiency, or asphyxia, was “one of the more likely” causes of Mr. Floyd’s death.

He said that he considered drug overdose and excited delirium syndrome, said to be a display of aggression or distress attributed to mental illness or drug use, to have been less likely causes. Dr. Wankhede Langenfeld said paramedics had not reported that Mr. Floyd was exhibiting signs of either.

After watching Chief Arradondo’s testimony on Monday, Nekima Levy Armstrong, a civil rights lawyer, said she had been the resident who had originally alerted the chief to the video on the night Mr. Floyd died.

She added that she was pleased with his testimony.

“He set a powerful example that police chiefs across the nation should follow when they know that their officers have violated people’s human rights and constitutional rights,” Ms. Armstrong said.

ViacomCBS stock tanks, losing more than half its value in less than a week.

The Dispossession of André Leon Talley