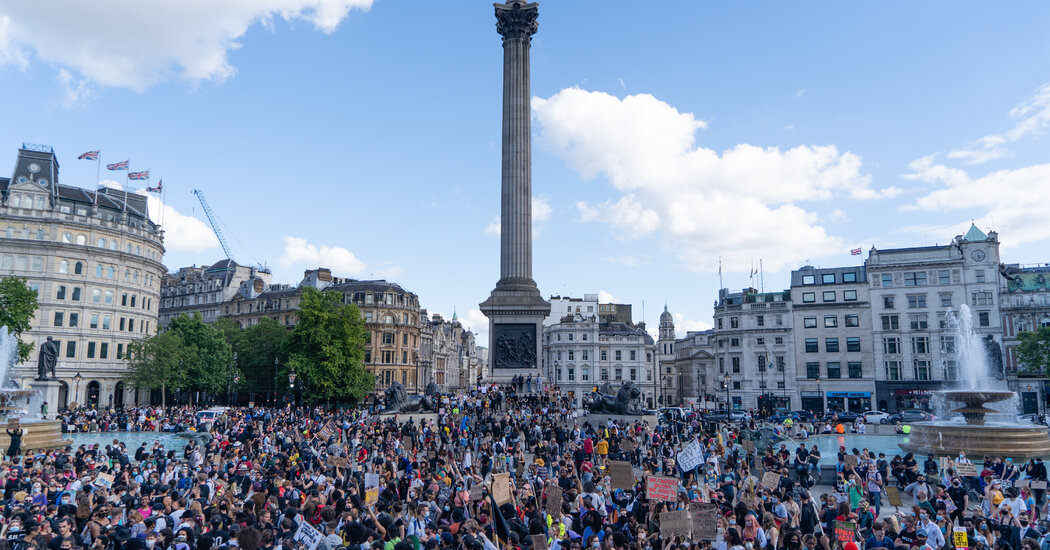 The government report, while acknowledging enduring racism, said Britain provided a model for other white-majority countries on issues of race. Critics accused it of ignoring racial injustice in the country.

LONDON — British cities echoed last year with the cries of Black Lives Matter protesters, demanding a racial reckoning in Britain similar to that convulsing the United States in the wake of multiple killings of Black Americans by the police.

On Wednesday, Prime Minister Boris Johnson responded by releasing a government-commissioned report on the state of racial discrimination in Britain that concluded that the country “should be regarded as a model for other white-majority countries.” The backlash was swift and scathing.

Critics accused the Conservative government of whitewashing racial injustice by arguing that discrimination is more a result of socio-economic disparities than skin color. By discouraging use of the term institutional racism, they said, the report sought to turn back the clock on how Britons talk about race.

While the document, compiled by a 10-member Commission on Race and Ethnic Disparities, acknowledged the enduring nature of racism — “graffiti on someone’s business, violence in the street or prejudice in the labor market” — it came to an upbeat conclusion about the progress of British society as a whole.

“Put simply, we no longer see a Britain where the system is deliberately rigged against ethnic minorities,” the report said. “Too often ‘racism’ is the catch all explanation and can be simply implicitly accepted rather than explicitly examined.”

ImagePrime Minister Boris Johnson set up the commission following protests in Britain inspired by those in the United States following the killing of George Floyd by a police officer in Minneapolis.Credit…Frank Augstein/Associated Press

Among its most prominent assertions is that among low-income groups, ethnic minorities — South Asians and Black Africans — consistently outperform working-class white people in school examinations. Only children from Black Caribbean families perform worse than white people. That finding is not new, scholars said, but it bolsters the case that race is not the biggest obstacle to educational attainment.

For some critics, the findings seemed calculated to buttress Mr. Johnson’s political agenda, which seeks to “level up” prosperity between wealthy London and the white, working-class strongholds in the Midlands and the north. While the commission is independent, and all but one of its members are ethnic minorities, critics said they were chosen because their views generally align with that agenda.

“The argument is that the real victims of racism are the white working class,” said Kehinde Andrews, a professor of Black Studies at Birmingham City University. “The reason they have asked these Black and brown people to do this report is to legitimize their position.”

The findings are “so brazen it’s ridiculous,” Professor Andrews said, adding, “white academics couldn’t get away with saying this.”

The report concluded that Britain “should be regarded as a model for other White-majority countries.” Credit…Chris J Ratcliffe/Getty Images

Defenders of the report, however, say it moves the debate over race to more objective ground, marshaling statistics to puncture what they call popular myths about racial discrimination in British society. It makes sensible recommendations, like abandoning the widely-used acronym B.A.M.E. — Black, Asian and minority ethnic — which it says does not account for the divergent experiences of different ethnic groups.

Racial disadvantage “is real but not generally caused by white racism,” the author David Goodhart wrote in an essay for his think tank, Policy Exchange. “There can be racial disadvantage without racists because of a legacy of distrust and lack of opportunity in the past.”

Mr. Goodhart, whose latest book, “Head, Hand, Heart,” explores alienation and the roots of populism, said the report was compiled by veterans of the racial struggles of the 1970s and 1980s, who are, in effect, saying to the young Black Lives Matter protesters, “Our experience has taught us that you do not pass on the baton of progress by cleaving to a fatalistic account that insists nothing has changed.”

Race has been recurring issue in Britain in the last year. It surfaced recently in the interview that Prince Harry and his wife, Meghan, gave Oprah Winfrey, when Meghan, a biracial American former actress, claimed that members of the royal family worried about the skin color of her unborn child.

Mr. Johnson set up the commission after protests in London and other cities inspired by those in the United States following the killing of George Floyd by a police officer in Minneapolis. To chair it, he chose Tony Sewell, an educational consultant and son of Jamaican immigrants, who worked for the prime minister when he was mayor of London.

The report opposed the tactics of those protesters, including pulling down the statue of a notorious 17th-century slave trader, Edward Colston, in Bristol. Critics faulted its advocacy of a “new story” about the slave trade, one that focused less on the suffering it caused and more on how “culturally African people transformed themselves into a remodeled African/Britain.”

The pedestal on which the statue of Edward Colston previously stood was surrounded by messages of support for the Black Lives Matter movement last June.Credit…James Beck for The New York Times

A Labour Party lawmaker, Zarah Sultana, wrote on Twitter that “an attempt to put positive spin on the slave trade — one of the most monstrous crimes in human history — is sickening.” The report, she said, was a “disgraceful sham.”

Even worse to critics, the 257-page document is presented as a successor to the highly influential Macpherson Report, which grew out of an inquiry into the racially motivated killing of a Black teenager, Stephen Lawrence, in 1993. That document found evidence of institutional racism in the botched investigation of the crime, a provocative new concept that transformed the debate over racism in Britain.

With hate crimes being reported to the police at a greater rate, the new report argues that the term institutional racism should no longer be used so liberally and without evidence to support it — a subtle point that critics say is nonetheless damaging.

“Reverting to the idea that we’re going to focus on racism only as overt hostility and hatred takes us back to the more simplistic ways we talked about racism,” said Matthew Ryder, a lawyer who worked on racial issues as a deputy mayor of London. “It undoes the progress we’ve made in the last 20 years in this country.”

The report argues that the term institutional racism should no longer be used so liberally.Credit…Niklas Hallen/EPA, via Shutterstock

Even before its release, critics complained that the report’s conclusions were handed to selected journalists before publication as part of a media strategy shaped more by politics than a desire to expand the discourse over race.

Afzal Khan, a Labour lawmaker, said the document was “based on a Conservative ideology that seeks to place the blame on individuals rather than addressing its root cause” and was a “blatant and transparent attempt to kick start a culture war.” The report came out against programs, like unconscious bias training for employees, which are often targeted by critics on the right.

There was also criticism from David Lammy, another Labour lawmaker and the author of a 2017 study on how the criminal justice system treated minorities. Mr. Johnson’s approach to the Black Lives Matter movement had “let an entire generation of young white and Black British people down, Mr. Lammy said on LBC, a talk-radio station on which he recently debated patiently with a caller who argued that his Afro-Caribbean heritage meant he could not be considered English.

“This report could have been a turning point and a moment to come together,” Mr. Lammy said. “Instead, it has chosen to divide us once more and keep us debating the existence of racism rather than doing anything about it.”

Woman Uses Old Tires And Turns Them Into Playgrounds

A Designer Who Finds Beauty in Austerity

There Is No Such Thing as a Bad Player

Johnson & Johnson’s vaccine is delayed by a U.S. factory mixup.