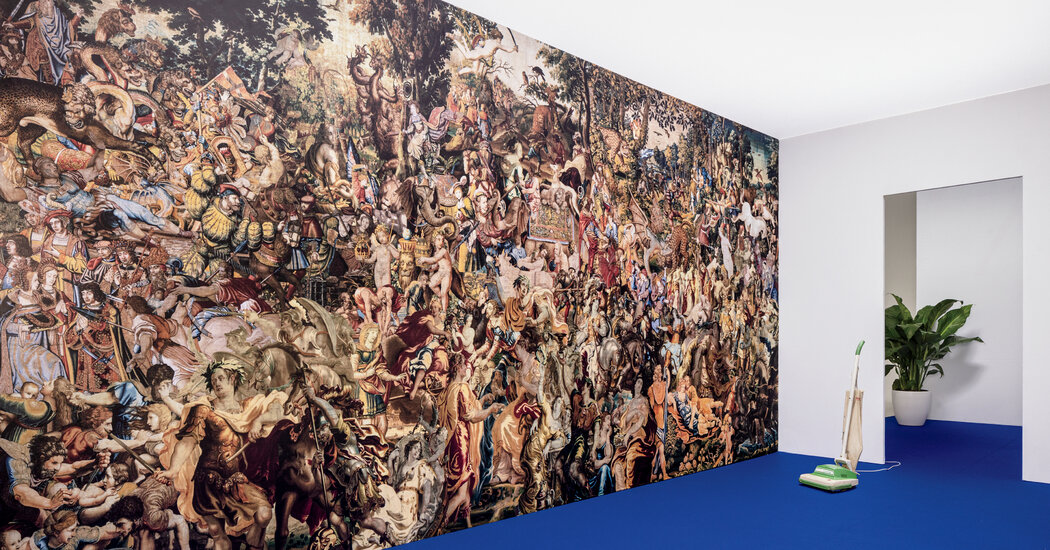 The textile maker Maharam and the design firm 2×4 have conceived a vibrant wall covering that collapses time and space.

Wall tapestries were commissioned by the Catholic Church in the 13th and 14th centuries to communicate Bible stories to the illiterate masses, but by the Renaissance, they had become aristocratic status symbols. When kings and nobles were defeated in battle, the victor often seized the huge, intricately woven textiles, with their scenes of conflict, village life and mythical beasts, and resized them to fit the walls of their own castles, where they served as both insulation and trophies. Now, Maharam, the textile maker that began at the turn of the 20th century as a fabric pushcart on the streets of Manhattan’s Lower East Side, has reinterpreted the traditional craft. The company collaborated with the New York-based design firm 2×4, which took hundreds of public-domain images of tapestries from the 14th to the 16th centuries to create a 10-by-20-foot digital collage titled Tableau Vivant. Maharam then digitally printed the panorama onto a cellulose and latex substrate that can be applied directly to a wall (smaller sections can be customized to fit any space). From a distance, the work appears to be a museum piece, but up close — where you can see peasants pasted next to unicorns and trees growing at strange angles — it collapses time and space with a psychedelic verve. Price upon request, maharam.com.

A Changing Gut Microbiome May Predict How Well You Age