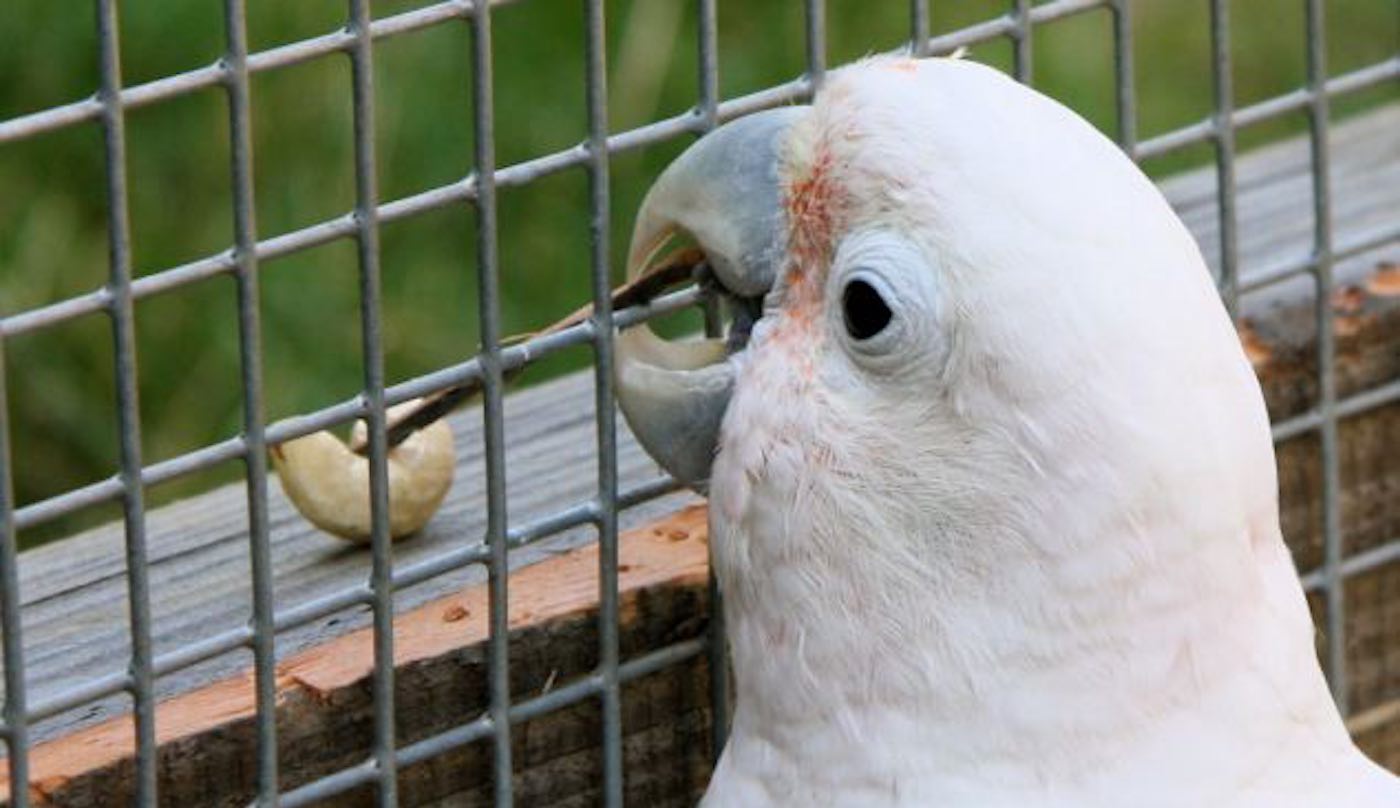 A Goffin’s cockatoo named Figaro and his friends have long been stunning researchers with their ability to craft and use tools, requiring levels of intelligence thought to be similar to a 3-year-old human.

Even without possessing the natural wild behavior for making tools, or even the proper beaks normally thought of as sufficient for tool-making, three of these birds managed to craft different tools to fish out cashew nuts from a sealed box.

Tool-making, either with sticks or hooks, is well-documented in the Aves class. As Jennifer Ackerman brilliantly details in her work The Genius of Birds, new Caledonian crows and a few other birds can not only craft sticks to reach larvae in trees, they can actually fashion sticks with hooks on the end, even going so far as to use composite material to make the grub-grabbing a breeze.

Goffin’s cockatoos live on the Tanimbar Islands, a small archipelago in Indonesia. They’ve become a model species for avian intelligence.

Unlike crows, whose bills are quite straight and useful for manipulating the world around them, cockatoos have curled beaks, designed simply for cracking nuts and seeds.

One day four years ago, at the Goffin Lab in Vienna, a center for avian intelligence, Figaro noticed a pebble outside his cage resting on a wooden beam. Desiring this pebble for his own purposes, he tried to pull it towards him using a shard of bamboo.

Impressed, the researchers replaced the pebble with a cashew, triggering Figaro to stick his beak through the bars of his cage and gnaw off a splinter of wood from the very beam the cashew was resting on, before using the splinter to reel the cashew into his tensile beak.

Class is in session

At the Goldegg Goffin Lab, part of the Messerli Institute for Research, the avian clubhouse where Figaro and his friends live, lab director Alice M.I. Auersperg wanted to see if Figaro could impart this self-generated wisdom onto his peers.

Figaro shares the lab with 15 other cockatoos, none of whom are wing clipped, and all of whom participate in trials voluntarily, with the option of simply flying away always available.

“Twelve Goffin’s saw either demonstrations by Figaro, or ‘ghost’ controls where tools and/or food were manipulated using magnets,” writes Auersperg, in the corresponding research paper.

Tool-use competence was pretty extreme. Demonstrations by Figaro included trimming the branches off a twig, splitting a thin board of larch wood, and even using his beak like a scissor to painstakingly bite cardboard into a long enough tool.

Figaro’s best pupil was Dolittle, who mastered the twig-trimming, cardboard-cutting, and larch-woodworking, while Pipin only managed the twig, having some kind of phobia towards larch wood.

Kiwi managed both the larch wood and the twig-trimming, but failed with the cardboard, which researchers predicted would be the hardest task.

In a moonshot, Auersperg also gave them beeswax, which none of the four birds could manage to work with.

Tool-use was just the start of the Silicon Valley careers of Figaro and his friends, as Auersberg has more recently been comparing their intelligence to those of cockatoos that have spent, unlike Figaro, only a short time in captivity.

With a controlled environment to study both innovation behavior and innovation rate, Auersberg created the “Innovation Arena,” (IA) a semicircle of 20 different challenges all baited with a preferred food reward. Each avian would then have 20 minutes to freely explore, innovate, and get as many treats as they cared to work for.

“It is, to our knowledge, the first study specifically targeting innovation rate per time unit in animals and the first systematically controlled direct comparison of problem-solving between captive-born and temporarily wild-caught animals,” read the study, published in 2020 in the journal Scientific Reports.

“It yielded a number of interesting findings, with the most significant one being that long-term captivity does not seem to affect the Goffins’ overall capacity to innovate in the IA but rather their motivation to do so.”

“Captivity bias” is a term used by animal researchers to describe the bump in intelligence, as related to problem-solving, seen in animals subject to long term captivity when compared with their wild peers.

Auersperg’s work presents a new paradigm, at least with birds, that group-identity (captive, wild-caught) could not predict the probability of finding solutions to the 20 problems.

RELATED: New Research Shows Why Crows Are So Intelligent and Even Self-Aware—Just Like Us

This research presents a series of fascinating conclusions. First, that cockatoos can use tools, and that they may have evolved this behavior either in the wild, or more astoundingly, without ever having had to use it in the real world. Second, cockatoos don’t need to inherit intelligence through genetic instinct, but can actually learn by watching a peer—characteristics reserved for the smartest of animals.

Lastly, it demonstrates that cockatoos should maybe be viewed as seriously difficult pets. They can not only live 40 years, but with the intelligence of a 3-year old, require constant mental stimulation if one is to keep them healthy.

(WATCH the video of Figaro making tools below.)

Share This Fascinating Finding With Your Friends on Social Media…

A watershed moment for US water quality: Scientists decry federal rule that removes protection from ‘unconnected’ streams and wetlands