With Vaccine Delay, Biden Warns of Uncertain End to Pandemic 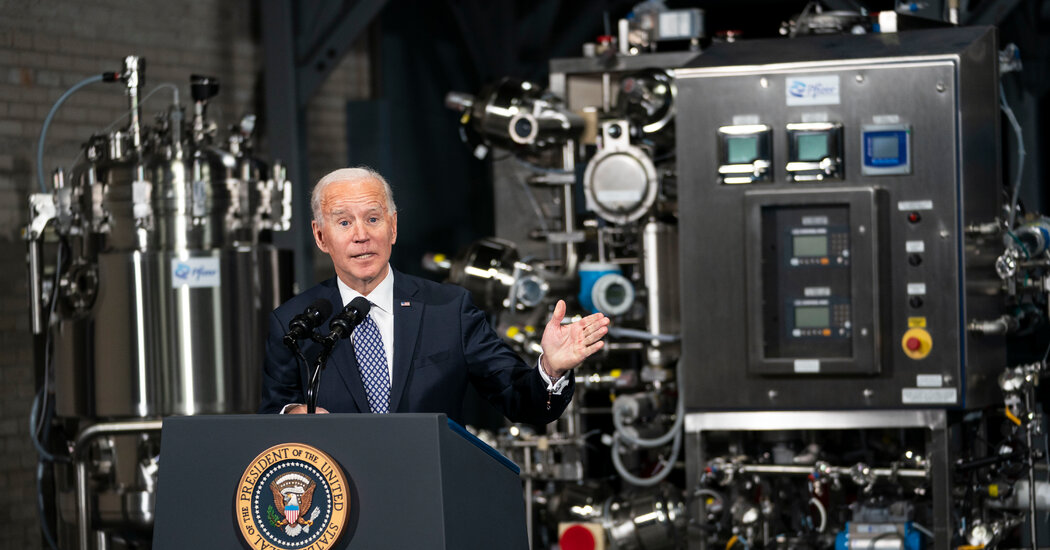 On a visit to a vaccine manufacturing plant in Michigan, President Biden said the nation could be “approaching normalcy” by the end of the year, but said new virus variants could slow progress.

WASHINGTON — President Biden, on a visit to Pfizer’s coronavirus vaccine plant in Kalamazoo, Mich., said on Friday that the nation could be “approaching normalcy” by the end of the year, but cautioned that new virus variants and potential vaccine production problems could slow progress.

“God willing, this Christmas will be different than last, but I can’t make that commitment to you,” Mr. Biden said. “I can’t give you a date when this crisis will end, but I can tell you we are doing everything possible to have that day come sooner rather than later.”

His appeal for patience came hours after the White House issued a plea to local officials to quickly work through six million vaccine doses that have stacked up during winter storms, which delayed appointments and forced vaccine sites to temporarily shutter throughout the nation.

Andy Slavitt, a White House pandemic adviser, said at a news conference Friday morning that those doses represented about three days’ worth of shipping delays, and that states had made up for some of the backlog with existing stock. Of the six million doses, 1.4 million were already in transit on Friday, he said, and the rest were expected to be delivered in the next week.

“We’re asking vaccine administration sites to extend their hours even further and offer additional appointments and to try to reschedule the vaccinations over the coming days and weeks as significantly more supply arrives,” Mr. Slavitt said.

The delay was a sign of how interconnected the nation’s vaccine distribution network is, vulnerable to substantial interruptions because of extreme weather. Mr. Slavitt said that FedEx, U.P.S. and McKesson — the drug distribution giant that manages Moderna’s vaccine — had been impeded, with workers snowed in and unable to package and ship vaccines, including the supplies that go with them.

FedEx and U.P.S., which have vaccine shipping hubs in Memphis and Louisville, Ky., would make Saturday deliveries this week, he said.

Closed roads on delivery routes were also forming a bottleneck, and more than 2,000 vaccination sites in areas with power failures could not receive doses. That prompted federal officials to hold off shipping to areas that might not be able to keep them at the frigid temperatures required.

Shipment delays have been reported in California, Colorado, Florida, Illinois, Nevada, New Jersey, Ohio, Oregon, Utah and Washington, among other states. In Texas, where millions of residents lost power during the powerful storm this week, a delivery of more than 400,000 first doses and 330,000 second doses had been delayed in anticipation of the bad weather.

In New York City, Mayor Bill de Blasio said during an interview on WNYC that expected shipments of more than 100,000 doses had not fully arrived from factories; he did not say when they would come.

“Everything’s been disrupted by the storm,” Mr. de Blasio said.

The city had to hold off on scheduling as many as 35,000 appointments for first vaccine doses because of shipment delays and vaccine shortages, he also said this week. The opening of two new distribution sites on Thursday had also been postponed, with one on Staten Island pushed to Friday and another in Queens still delayed.

Mr. Biden’s visit to Kalamazoo, where Pfizer produces one of two federally authorized coronavirus vaccines, piggybacked on hopeful developments that could potentially expand access to the company’s vaccine at a time when nations around the world are trying to ramp up vaccinations.

A study in Israel showed that the vaccine was robustly effective after the first shot, echoing what other research has shown for the AstraZeneca vaccine. It also raised the possibility that regulators in some countries could authorize delaying a second dose instead of giving both on the strict schedule of three weeks apart as tested in clinical trials.

Published in The Lancet on Thursday and drawing from a group of 9,100 Israeli health care workers, the study showed that Pfizer’s vaccine was 85 percent effective 15 to 28 days after receiving the first dose. Pfizer and BioNTech’s late-stage clinical trials, which enrolled 44,000 people, showed that the vaccine was 95 percent effective if two doses were given three weeks apart.

But Dr. Anthony S. Fauci, the government’s leading expert on infectious diseases and an adviser to Mr. Biden, said at the White House news conference that the results of the study were not significant enough to change recommendations in the United States, where regulators have held fast to the requirement that people receive two doses of the vaccine three weeks apart.

Pfizer’s chief executive, Dr. Albert Bourla, told CNN on Friday that he did not believe a single-dose regimen of his company’s vaccine would work but said the idea was being studied.

Pfizer and BioNTech also announced on Friday that their vaccine could be stored at standard freezer temperatures for up to two weeks, potentially expanding the number of smaller pharmacies and doctors’ offices that could administer the vaccine, which now must be stored at ultracold temperatures.

In a statement, the companies said they had submitted the new temperature data to the Food and Drug Administration, which would need to sign off on guidance to providers that would allow them to store the vaccines at the new temperatures.

Distribution of the Pfizer-BioNTech vaccine has been complicated by the requirement that it be stored in freezers that keep the vaccines between minus 112 and minus 76 degrees Fahrenheit.

Mr. Biden’s visit to Michigan came in the shadow of increasing pressure to clarify his administration’s message about when his vaccination campaign would be broad enough to reach every American. More than 40 million people have received a first dose of a vaccine, including about 16 million who have received two, according to recent figures released by the Centers for Disease Control and Prevention.

On Friday, he appealed to Americans to be patient as they waited for the vaccine, telling them to take one if it is offered to them and repeatedly vouching that it would help rather than harm them.

“I know people want confidence that it’s safe,” he said. “Well, I just toured where it’s being made. It takes more time to do the check for safety than it does actually to make the vaccine. That’s how fastidious they are.”

Governors in both parties have been pressing the Biden administration for clearer and more consistent messaging about the timeline for the vaccination campaign. Last week, Mr. Biden struck a careful note, saying he did not expect that every American would be vaccinated by the end of the summer.

This week, he said there would be enough vaccine available by the end of July to do so.

Also on Friday, Mr. Biden joined fellow leaders of the Group of 7 nations virtually and promised to donate $4 billion to an international coronavirus vaccine effort — $2 billion now, he said, “with the promise of an additional $2 billion to urge others to step up as well.”

“It’s not enough that we find cures for Americans,” the president said in Kalamazoo, adding, “You can’t build a wall or a fence high enough to keep a pandemic out.”

At home, the situation is more fraught. This week, the National Governors Association sent a letter to Mr. Biden, praising the administration’s coronavirus response coordinator, Jeffrey D. Zients, for “doing great work,” but also asking for better coordination between the federal government and the states. Mr. Zients accompanied Mr. Biden to Michigan.

Vaccines being transferred to cold storage. Governors in both parties have asked the Biden administration for clearer and more consistent messaging about the timeline for the vaccination campaign.Credit…Doug Mills/The New York Times

Mr. Biden has repeatedly promised to get 100 million shots into Americans’ arms by his 100th day in office. His pledge appeared ambitious when he first made it before Election Day, but has more recently been criticized as not ambitious enough.

The country is now vaccinating an average of 1.7 million people a day, and Mr. Biden said the country was “on track to surpass” the 100 million goal, even as the delayed doses threaten to lower the daily average.

Dr. Bourla said that over the next few weeks, Pfizer expected to increase the number of doses for the United States to more than 10 million per week from five million, and that it would provide the government a total of 200 million doses by the end of May, two months ahead of schedule.

The White House also announced on Friday the opening of four new federally supported community vaccination sites in Florida — in Orlando, Miami, Tampa and Jacksonville — that together would be able to vaccinate 12,000 people each day. Another new site in Philadelphia would have the capacity to vaccinate 6,000 people a day. All sites would be functioning within two weeks, said Mr. Slavitt, the White House adviser.