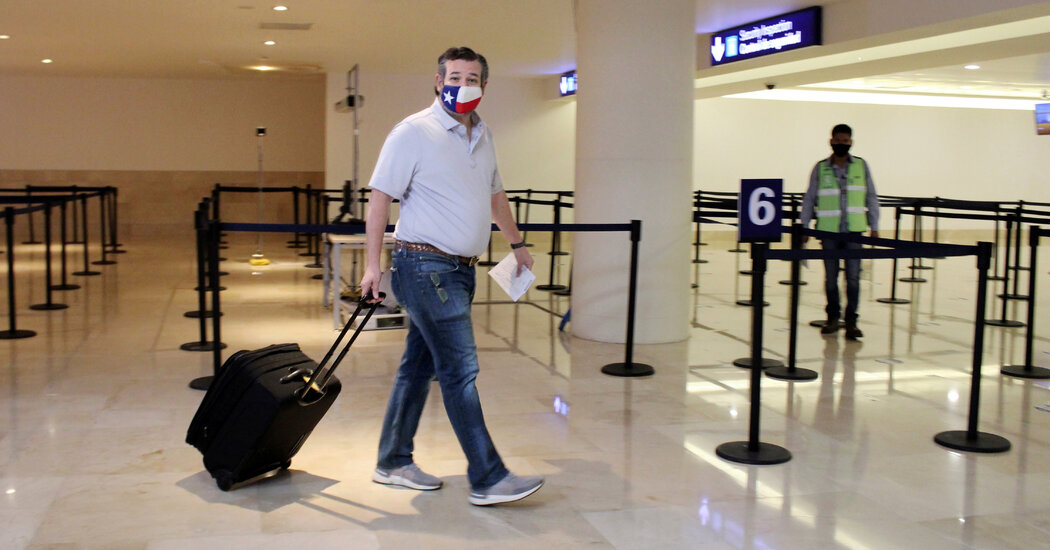 The Texas senator faced fierce blowback for fleeing his state as a disaster unfolded. Text messages sent by his wife revealed a hastily planned trip away from their “FREEZING” family home.

Senator Ted Cruz of Texas flew home from a vacation to Mexico after receiving heavy criticism for leaving the state while millions have struggled with a lack of electricity and water after a brutal winter storm.

Keep working to get the grid reopened, to get power restored, get water back on. A lot of Texans are hurting, and this crisis is frustrating. It’s frustrating for millions of Texans, it shouldn’t happen. 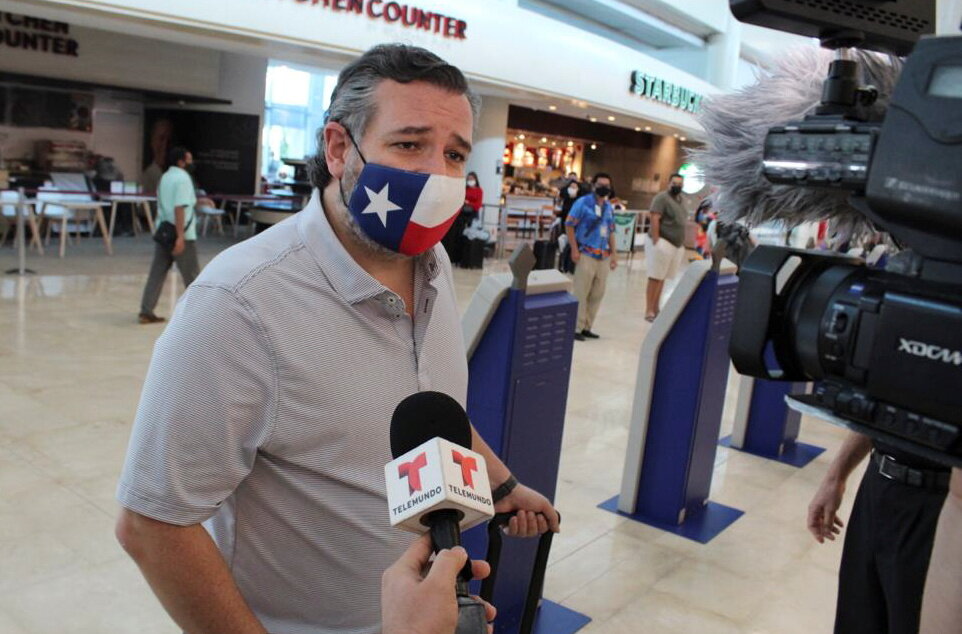 Senator Ted Cruz of Texas flew home from a vacation to Mexico after receiving heavy criticism for leaving the state while millions have struggled with a lack of electricity and water after a brutal winter storm.CreditCredit…Reuters

Like millions of his constituents across Texas, Senator Ted Cruz had a frigid home without electricity this week amid the state’s power crisis. But unlike most, Mr. Cruz got out, fleeing Houston and hopping a Wednesday afternoon flight to Cancún with his family for a respite at a luxury resort.

Photos of Mr. Cruz and his wife, Heidi, boarding the flight ricocheted quickly across social media and left both his political allies and rivals aghast at a tropical trip as a disaster unfolded at home. The blowback only intensified after Mr. Cruz, a Republican, released a statement saying he had flown to Mexico “to be a good dad” and accompany his daughters and their friends; he noted he was flying back Thursday afternoon, though he did not disclose how long he had originally intended to stay.

Text messages sent from Ms. Cruz to friends and Houston neighbors on Wednesday revealed a hastily planned trip. Their house was “FREEZING,” as Ms. Cruz put it — and she proposed a getaway until Sunday. Ms. Cruz invited others to join them at the Ritz-Carlton in Cancún, where they had stayed “many times,” noting the room price this week ($309 per night) and its good security. The text messages were provided to The New York Times and confirmed by a second person on the thread, who declined to be identified because of the private nature of the texts.

For more than 12 hours after the airport departure photos first emerged, Mr. Cruz’s office declined to comment on his whereabouts. The Houston police confirmed that the senator’s office had sought their assistance for his airport trip on Wednesday, and eventually Mr. Cruz was spotted wheeling his suitcase in Mexico on Thursday as he returned to the state he represents in the Senate.

As the Cruzes were away, millions of Texans were still without electricity, many had no running water and the icy air that swept into the state was so severe that the Federal Emergency Management Agency had been activated to send supplies, including generators. Some searched neighborhoods for discarded fallen trees to burn for warmth.

“What’s happening in Texas is unacceptable,” Mr. Cruz told a television crew at the Cancún airport. He was wearing a Texas state flag mask and a short-sleeved polo shirt tucked into his jeans; the temperature in Cancún was above 80 degrees Fahrenheit on Thursday, and in the 30s in Houston.

After landing back in the United States, Mr. Cruz offered a new statement with a different tone from earlier in the day, when he had tried to explain the vacation without regrets and left the impression that it might have always been a one-day trip for him. Speaking to reporters after his arrival home, he conceded that the trip was “obviously a mistake” and said he had begun having “second thoughts” as soon as he boarded the plane to Mexico intent on a few days of remote work in the sun.

“The plan had been to stay through the weekend with the family,” he said, framing the decision as a parent’s attempt to placate his two daughters, ages 10 and 12, after a “tough week.”

“As it became a bigger and bigger firestorm, it became all the more compelling that I needed to come back,” he added.

Mr. Cruz’s critics quickly circulated hashtags mocking his trip: #FlyinTed, a play on former President Donald J. Trump’s derisive nickname for Mr. Cruz during the 2016 primary race, and #FledCruz, among them. Some Democratic groups sought to fund-raise off the episode, and the state Democratic Party renewed its calls for Mr. Cruz’s resignation.

“This is about as callous as any politician can get,” said Gilberto Hinojosa, the Texas Democratic Party chairman. Mr. Hinojosa said he was shocked but not surprised by Mr. Cruz’s international excursion: “He’s a politician that really has never cared much about anybody but himself.”

Untimely vacations and opulent splurges have long ensnared politicians in scandals and public-relations headaches: the international trips arranged by the disgraced former lobbyist Jack Abramoff in the early 2000s for members of Congress; Chris Christie, then the governor of New Jersey, sitting on a state beach in 2017 after he had ordered such beaches closed because of a government shutdown; and, more recently, Gov. Gavin Newsom of California dining without a mask during the pandemic last year at the high-end restaurant the French Laundry.

Mr. Cruz’s decision to leave his state in the middle of an emergency was an especially confounding one for an ambitious politician who has already run for president once and is widely seen as wanting to run again in 2024 or beyond.

“It was clearly an error in judgment,” said Ray Sullivan, an Austin-based Republican strategist who served as chief of staff to former Gov. Rick Perry. While a senator cannot personally restore the power grid, Mr. Sullivan said, “people expect their elected officials to be fully engaged during a crisis.”

Mr. Cruz, 50, narrowly won re-election in 2018 against Beto O’Rourke, a Democratic former congressman, carrying less than 51 percent of the vote. In that race, Mr. Cruz had aggressively highlighted his efforts during a past emergency, Hurricane Harvey. He is not up for re-election until 2024.

While the city of Houston was gripped by the freezing weather on Wednesday, a member of Mr. Cruz’s staff contacted personnel with the Houston Police Department at George Bush Intercontinental Airport ahead of his flight requesting “assistance upon arrival,” according to Jodi Silva, a department spokeswoman.

Ms. Silva said the police had “monitored his movements” before he departed. Officers were seen accompanying him upon his Thursday return.

Mr. Cruz insisted in his statement on Thursday that he and his staff had been “in constant communication” with state and local leaders during his brief Cancún trip.

“This has been an infuriating week for Texans,” he said.

In his statements, Mr. Cruz noted that the private school his daughters attend in Houston was closed this week. But some other parents at the school were incensed when they heard about his international trip because of the pandemic and school policies that have discouraged such travel abroad.

Two parents provided a copy of the written school policy for students not to return to classrooms for seven days after international travel, or to take a coronavirus test three to five days after returning, which would keep the Cruz children out of school for the following week. (Separately, an aide to Mr. Cruz said he had taken a virus test before his return flight on Thursday; the Centers for Disease Control and Prevention requires a negative result.)

When Ms. Cruz wrote to the group text chain of neighbors trying to weather the extreme conditions early Wednesday, she said the family had been staying with friends to keep warm, but quickly pivoted to offering an invitation to get away.

“Anyone can or want to leave for the week?” she wrote. “We may go to Cancún.” She teased a “direct flight” and “hotels w capacity. Seriously.” Ms. Cruz promptly shared details for a Wednesday afternoon departure, a Sunday return trip and a luxurious stay at the oceanfront Ritz-Carlton in the meantime.

No one appeared to bite, but Ms. Cruz did extend a more practical offer. “We have gas stove so at least we can heat water little that there is happy to help anyone we can too,” she wrote.

The Times shared the contents of the messages with Mr. Cruz’s Senate office, but his aides did not comment. Ms. Cruz did not return a call seeking comment.

Mr. Cruz has long rankled members of both parties as a self-promoter since his arrival on Capitol Hill in 2013. Later that year, he became the leading actor in the drama that forced a government shutdown over the Affordable Care Act, and in 2016, Senator Lindsey Graham, Republican of South Carolina, famously joked during a speech, “If you killed Ted Cruz on the floor of the Senate, and the trial was in the Senate, nobody would convict you.”

But if Mr. Cruz annoyed his colleagues, he just as quickly won over the Tea Party wing of the G.O.P. He ran as an anti-establishment champion in the party’s 2016 presidential primary and finished as the runner-up to Mr. Trump, brandishing his colleagues’ disdain as a badge of honor.

Representative Lizzie Fletcher, a Democrat who represents Mr. Cruz’s Houston neighborhood in Congress, said on Thursday that the state was facing an “all-hands-on-deck situation” and that its leaders were needed to help marshal the federal response on the ground.

Ms. Fletcher was out of power herself until Wednesday and charged her phone in her car to continue to make calls to the House speaker, FEMA and other agencies — too busy, she said, to think about Mr. Cruz’s “decision to leave the state at this time.”

Mr. Cruz had been acutely aware of the possible crisis in advance. In a radio interview on Monday, he said the state could see up to 100 deaths this week. “So don’t risk it,” he said. “Keep your family safe and just stay home and hug your kids.”

Mr. Cruz had attacked a Democrat, Mayor Stephen Adler of Austin, in December for taking a trip to Cabo San Lucas, Mexico, while telling constituents to “stay home” during the pandemic.

‘Break It All’ Celebrates the Oppositional Energy of Latin Rock

I’ve Spent $60,000 to Pay Back Student Loans and Owe More Than Before I Began