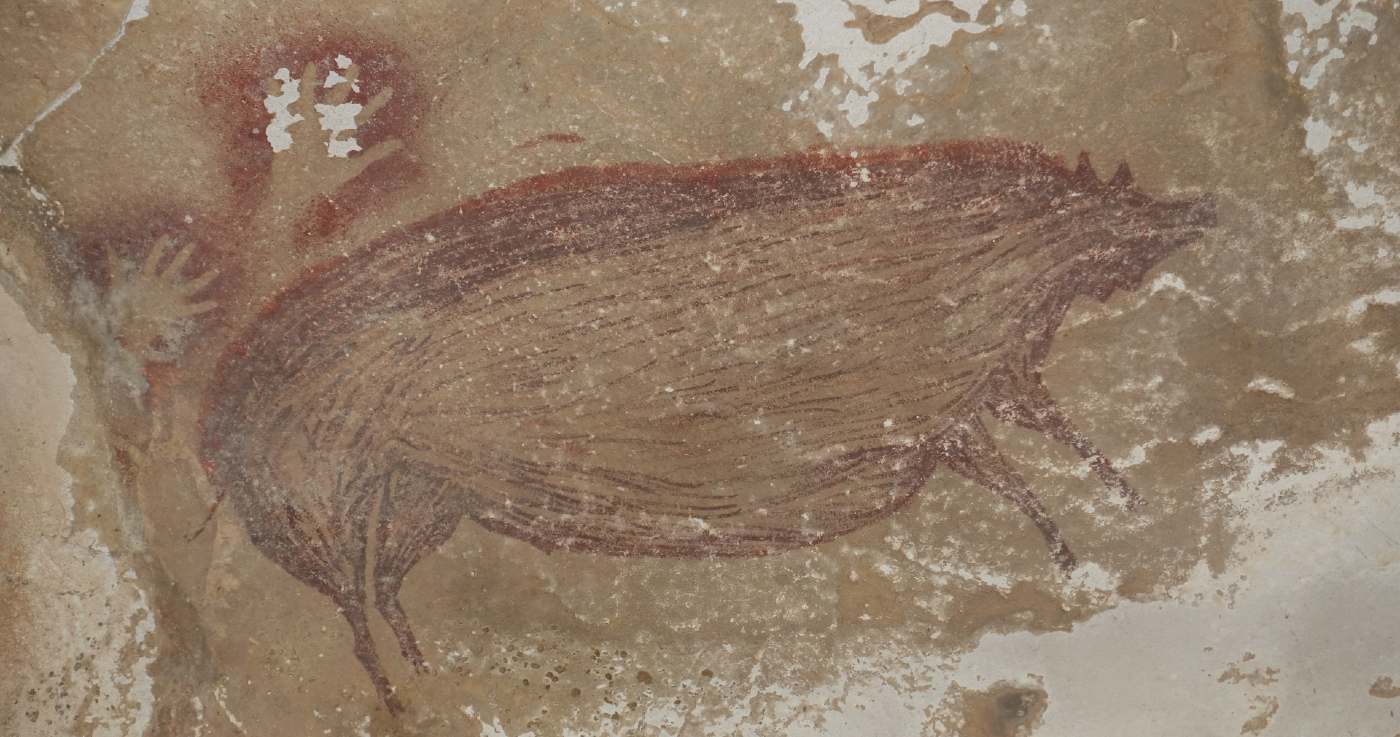 Scientists from Griffith University have discovered the world’s oldest known cave painting on a limestone wall on South Sulawesi island in Indonesia.

Dated to a remarkable 45,500 years ago, the painting is of a Sulawesi warty pig, a species hunted and depicted often in Sulawesi cave art from the Last Glacial Period.

The discovery definitively knocks out Europe and establishes that the Indo-Pacific is the center of the first-known developments in artistic expression and perhaps even story-telling.

“The cave is in a valley that’s enclosed by steep limestone cliffs and is only accessible by a narrow cave passage in the dry season, as the valley floor is completely flooded in the wet,” said Prof. Adam Brumm, co-leader of the expedition that consisted of researchers from both Indonesia’s highest center for archaeology (ARKENA), and Griffith’s Research Center for Human Evolution.

“The isolated Bugis community living in this hidden valley claim it had never before been visited by Westerners.”

Measuring 53 inches by 21 inches (136cm by 54cm), the pig is accompanied by two human handprints just above its hindquarters, and a pair of pigs off to the right which are only partially visible.

“The pig appears to be observing a fight or social interaction between two other warty pigs,” said Brumm.

Turning back the clock

Team co-leader, Professor Maxime Aubert from the Griffith Centre for Social and Cultural Research, sampled the art for uranium-series dating. Aubert is an expert in figuring out the age of objects, but noted in a media release that cave art is difficult to date correctly.

“Rock art is very challenging to date,” Professor Aubert said. “However, rock art produced in limestone caves can sometimes be dated using uranium-series analysis of calcium carbonate deposits (‘cave popcorn’) that form naturally on the cave wall surface used as a ‘canvas’ for the art.”

“…A small cave popcorn had formed on the rear foot of one of the pig figures after it had been painted, so when dated, it provided us with a minimum age for the painting.”

The subsequent analysis of the popcorn gave the figure of 45,500 ago, suggesting that it could have been painted at an earlier date.

Certainly finding their forte, the same research team of Brumm and Aubert had dated other warty pig paintings nearby, including one last year which was recognized as one of the 10 Most Important Discoveries of 2020 by Science Magazine.

That discovery dated to at least 44,000 years ago, and contained images of human-beast hybrids, or ‘therianthropes’ hunting Sulawesi warty pigs together, images which the team believed at the time represented a number of ‘firsts’.

“It represents our species first evidence of storytelling,” Professor Brumm said, according to Griffith press. “The figurative depiction of hunters as therianthropes may also be the oldest evidence for our ability to imagine the existence of supernatural beings, a cornerstone of religious experience.”

“We have found and documented many rock art images in Sulawesi that still await scientific dating. We expect the early rock art of this island to yield even more significant discoveries,” said study co-author and ARKENAS rock art expert Adhi Agus Oktaviana.

Somewhere beyond the sea

With the island of Sulawesi holding the oldest discovered surviving rock art on Earth, science can begin to color in more accurate hypotheses about the migration of humans across the vast swath of islands we call Oceania, but 45,000 years ago is described as ‘Wallacea’.

“Our species must have crossed through Wallacea by watercraft in order to reach Australia by at least 65,000 years ago,” said Professor Aubert in the news release. “However, the Wallacean islands are poorly explored and presently the earliest excavated archaeological evidence from this region is much younger in age.”

One such piece of evidence would be the Gunung Padang megalithic site on Java, in which controversial carbon dating suggests construction on a complex similar in nature to Stonehenge which began during 20,000 BCE, nearly 14,000 years before the English site

Taken together, the rock art sites on Sulawesi represent not only the earliest-known cave artworks, but also a rather sophisticated use of human imaginations; something that would certainly be required to organize hunter-gatherer groups into pursuing large construction projects.

“This discovery underlines the remarkable antiquity of Indonesia’s rock art and its great significance for understanding the deep-time history of art and its role in humanity’s early story,” Professor Brumm said.

SHARE the News of This Astonishing Find With Art-Minded Pals…

Link between education, income inequality has existed for a century

US military improved mortality since World War II, but there have been alarming exceptions