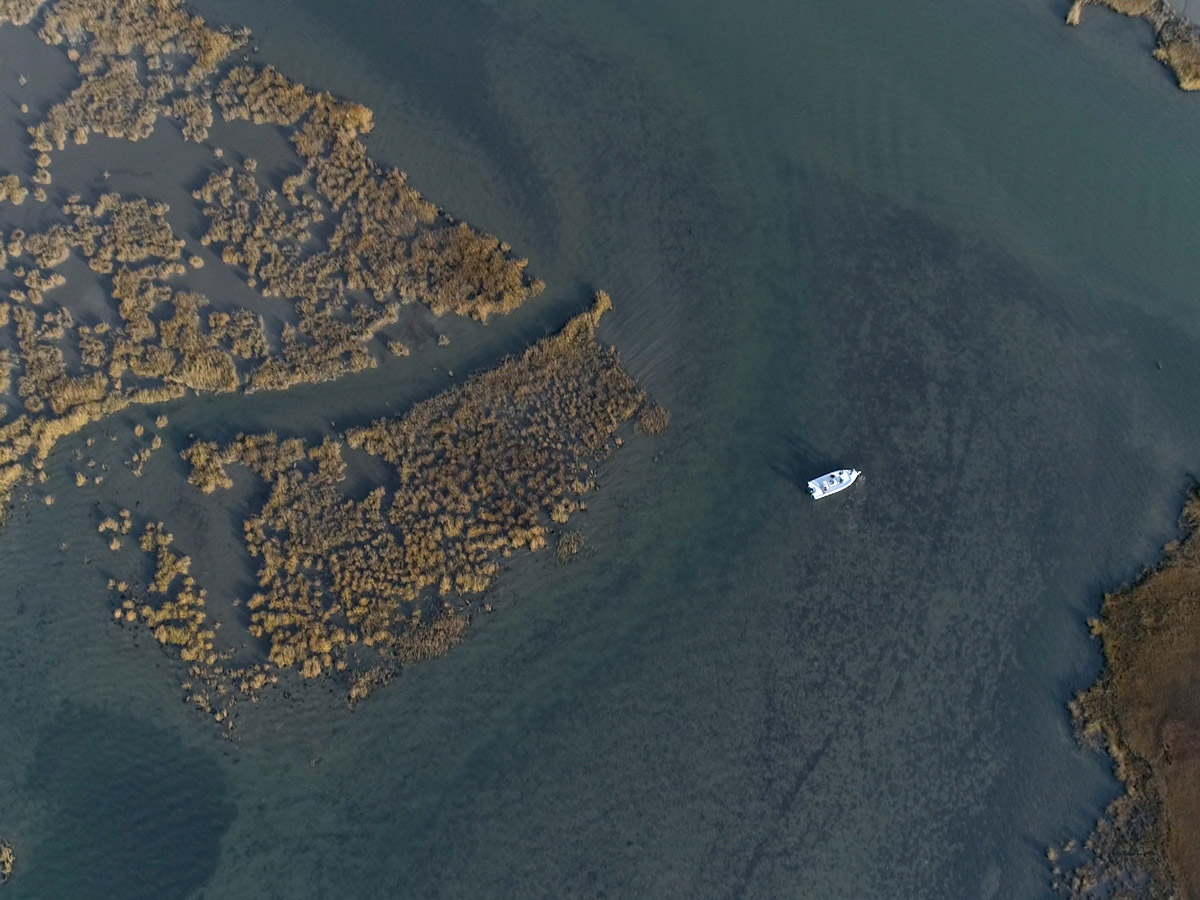 Shallow creeks warm quickly, and in the early spring, stripers school up where the creeks enter the bay.

At midnight on March 1, the New Jersey striped bass fishing season opens at the back bays, rivers, and inlets. Depending on where you’ll be casting for your first bass of the year, the best bet may be using the same techniques in the same locations where you’ve been fishing for your whole life, or you may need to switch things up to stay ahead of our constantly changing striper fishery. Here are some strategies for backwater stripers from Raritan Bay to the Delaware River.

How to Catch Striped Bass in New Jersey

For nearly half a century, the warm-water outflow from the Oyster Creek Nuclear Power Plant concentrated early-spring stripers and the fishermen hoping to catch them. In September 2018, the plant shut down, and the flow of warm water into Barnegat Bay stopped.

Therefore, fishermen looking to notch their first bass of the season in Barnegat Bay must rely on sun-warmed waters to concentrate the bass. For Greg Cudnik of Fisherman’s Headquarters in Beach Haven, that means targeting the shallower creeks and rivers entering the bay. The flow of slightly warmer water coming out of these creeks will attract the bass that wintered over in the bay, along with any early migrants.

Shallow sod banks also get Cudnik’s attention. While sods adjacent to deeper water are a favorite spot for him in the fall, in the spring, the shallower sod banks warm faster and fish better.

Cudnik also pays careful attention to the wind direction. Fishing in the deeper areas downwind of a shallow flat can have big results when sun-warmed water and baitfish wash toward the bass.

Cudnik sticks with artificials when earning his early-season stripes, primarily using soft plastics like Fin-S Fish and Kettle Creek paddletails, and fishing them slow. He also catches with a 5-inch Red Fin, swim shads, bucktails, and the Stillwater Smack-It Popper.

It’s going to be an interesting spring without the warm-water outflow holding baitfish and bass, Cudnik said, but he’s optimistic. “Fifteen to twenty-five-inch stripers have been all over the bay the past few seasons,” he noted, “and those schoolies will be back in numbers again this spring. The biggest question is how they will spread out as they search for natural sources of warm water.”

How to Find Spring Stripers

As the thoroughfares and shallow bays south of Ocean City warm under the early-spring sun, stripers will begin prowling the channel edges and sod banks for grass shrimp, crabs, and small baitfish. While bait-fishing will work in some locations, this region is better suited for covering water with lures.

Soft plastics rigged on jigheads are tough to beat for the first March stripers. Use a jighead heavy enough to touch the bottom, but not so heavy that it drags and picks up vegetation. For most of the Atlantic and Cape May county backwaters, 1/4- and 1/8-ounce jigheads cover the bases.

Improve your odds with March stripers by fishing the evening outgoing tides.

The best sod banks will parallel shallow flats with nearby feeder creeks, and will have a deeper channel nearby. This is the province of the shore-bound, kayak, and flats-boat fishermen, but anyone taking to the water in a small craft this month should exercise caution given the still-frigid water temperatures.

Bridges, of which this region has plenty, also hold fish in the early season, especially after dark, when small baitfish gather in the lights. Fishing the up-current side of the bridges and sweeping soft plastics toward the shadow lines is the best tactic. Work various depths, as the bass can be anywhere from finning on the surface to rubbing their bellies on the bottom. Early in the season, the latter is more often the case.

In the springtime, more than any other time of year, striper fishermen watch the water temperatures, waiting for them to reach that “magic number” when the bass start feeding.

In the fall, stripers remain active as water temperatures drop into the low 40s, but it takes a bit warmer water to get them going again in the spring. For Cudnik, 48 degrees is the starting point. “At 50 degrees, the fishing begins to pick up, and by the time the water reaches the mid-50s, good things are happening,” Cudnik notes.

More than the water temperature, Cudnik uses the long-held wisdom of watching plant life for signs that the fishing is firing up. “The dogwoods and cherry trees around town tell me to get focused,” he says. “When the blossoms start, I know it’s time. Once they are blooming, the fishing is popping off.”

For generations, the confluence of the Mullica River and Great Bay at Gravelling Point has served as the gathering place for fishermen seeking their first stripers of the season. The shallow mudflats and in-flowing river create a plume of warm water that attracts resident stripers like moths to a flame.

Clams, chunks, and even artificials catch bass, but the traditional—and seemingly most effective—tactic is soaking bloodworms on a high-low rig. Do the bass a favor and use 5/0 inline circle hooks when fishing the worms to avoid deep-hooking undersized fished that will make up the majority of the catch.

A new twist on the old technique has seen fishermen adding synthetic bloodworms to their hooks in addition to the real thing. This allows anglers to stretch out their bloodworm supply, using only a bit of a real worm for scent, while the synthetic bait provides additional scent and a visual target.

Though keeper-sized bass can be few and far between, watching a spiked rod on an early-spring afternoon while sipping coffee and chewing the fat with fellow striped bass hopefuls feels like a slice of heaven after the long, fishless winter.

“I used to go through a bushel of clams on the good nights,” says Rich “Swiss” Swisstack of the March fishing from the Raritan Bay shore, “but since Sandy, it’s all changed.”

Swisstack has 30 years of logbooks telling him that clams fished on the bay’s quickly warming mudflats are the ticket to big catches of spring stripers, but these days, it’s all about plugs.

“Now we’re seeing peanut bunker and small baitfish in the spring. We never used to see baitfish early on,” Swiss says. The first run of bass in the Raritan would scrounge around on the bottom rooting up worms and clams. Even on nights when he was getting bites every cast on clams, plugs dragged through the same waters were ignored.