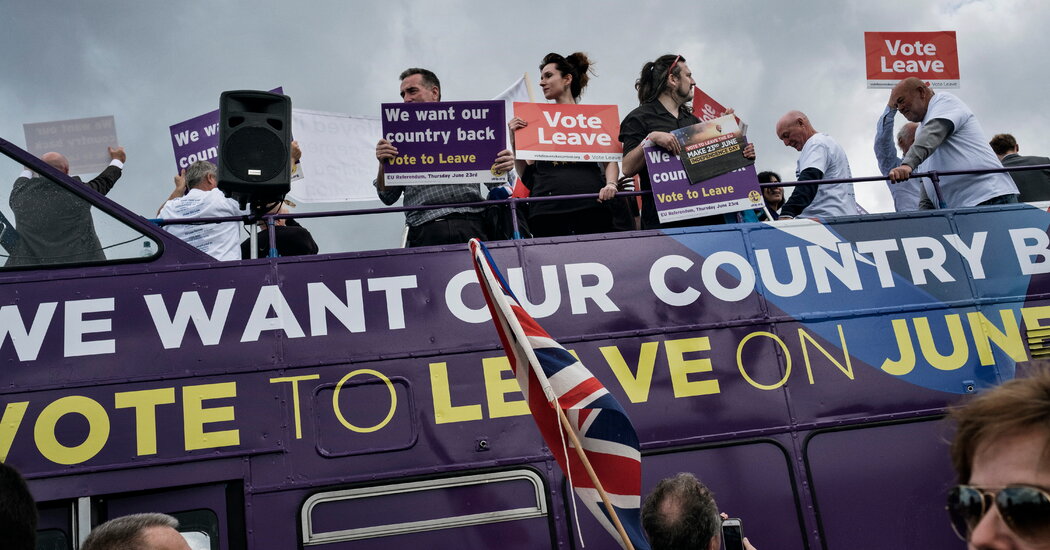 The idea of an agile “Global Britain” was an effective sales pitch. But that was before President Trump and other populists began erecting barriers to trade.

A Brexit rally in London in 2016.Credit…Adam Ferguson for The New York Times

LONDON — It took 11 grueling months for negotiators from Britain and the European Union to hammer out the terms of a post-Brexit trade deal. But in many respects, the deal is already four and a half years out of date.

The world has changed radically since June 2016, when a narrow majority of people in Britain voted to leave the European Union, tempted by an argument that the country would prosper by throwing off the bureaucratic shackles of Brussels.

In those days, the vision of an agile, independent Britain — free to develop profitable, next-generation industries like artificial intelligence and cut its own trade deals with the United States, China and others — was an alluring sales pitch. The buccaneers of Brexit promised to create a “Global Britain.”

That was before the anti-immigrant and anti-globalist-fueled rise of President Trump and other populist leaders who erected barriers to trade and immigration and countries turned inward. It was before the coronavirus pandemic exposed the vulnerabilities of far-flung supply chains, fueling calls to bring strategic industries back home and throwing globalism into retreat.

In the anxious dawn of 2021, buccaneers are out of fashion. The world is now dominated by three gargantuan economic blocs — the United States, China and the European Union. Britain has finalized its divorce from one of them, leaving it isolated at a time when the path forward seems more perilous than it once did.

ImagePrime Minister Boris Johnson, center right, has pivoted by highlighting ways that Britain can work with the United States outside those raised in the campaign for Brexit.Credit…Daniel Leal-Olivas/Agence France-Presse — Getty Images

“The whole ‘Global Britain’ model doesn’t reflect the more protectionist, nationalistic world we’re living in,” said Thomas Wright, the director of the Center on the United States and Europe at the Brookings Institution. “Becoming a global free trader in 2016 is a bit like turning into a communist in 1989. It’s bad timing.”

As Prime Minister Boris Johnson leads Britain into a post-Brexit future, he also risks being out of step politically.

The Brexit agreement with the European Union comes at the very moment that President-elect Joseph R. Biden Jr. is replacing Mr. Trump’s “America First” credo with a message of mending alliances and collaborating to tackle issues like global health and climate change.

While the deal averts tariffs and quotas on goods crossing the English Channel, it is at heart about disentangling neighbors who had become deeply integrated over four decades. That estrangement, analysts say, is bound to weaken ties between the two sides in other areas, like security and diplomacy.

“Biden wants to see alliances and multilateralism and cooperation, and Brexit runs completely against that,” said Mujtaba Rahman, an analyst at the Eurasia Group, a political risk consultancy. “Brexit is graduating into a more difficult political context where it is running against the grain.”

Mr. Trump cheered Britain’s drive to sever itself from the European Union. As a reward, he promised to negotiate a trade agreement with Mr. Johnson, whom he cultivated personally. But Mr. Biden opposed Brexit and has ruled out negotiating new trade agreements until the United States improves its own competitive position. That nullifies one of the prime selling points of Brexit.

The port of Dover, England.Credit…Andrew Testa for The New York Times

Mr. Johnson has pivoted by highlighting other ways that Britain can work with the United States. It is increasing military spending to reinforce NATO and playing host at a United Nations climate summit next year, which will give Mr. Biden a platform to re-engage the United States in the climate challenge.

Britain has also promoted itself as a champion of democratic values in places like Hong Kong, standing alongside the United States. But in a less hospitable world, it may not find many allies for that kind of work.

“Who are the obvious partners for them?” Mr. Wright said. “Four years ago, they could have said Brazil, but Brazil is now run by Bolsonaro,” he added, referring to the populist president, Jair Bolsonaro.

There are also limits to how muscular a partner Britain can be in the confrontation with autocratic states like China and Russia. Its changing relationship with China illustrates its diminished stature.

Britain once hoped its free-agent status would allow it to develop a thriving commercial relationship with Beijing, unencumbered by the baggage of the European Union or the United States. But under pressure from Mr. Trump on the role of the Chinese telecommunications giant Huawei in 5G networks, Britain has largely abandoned its cultivation of China, falling in line with the United States’ more antagonistic position.

A Huawei ad in London.Credit…Suzie Howell for The New York Times

The European Union, by contrast, has continued to negotiate a landmark investment treaty with China, a goal of the Germans, who want greater control over the Chinese operations of their companies. Last-minute objections raised by aides to Mr. Biden are giving the Europeans second thoughts, but Germany’s drive to finish the deal before the end of the year attests to its more confident position.

In 2016, Brexit was embraced by three distinct factions in British politics, said Matthias Matthijs, a professor of international political economy at Johns Hopkins University: right-wing anti-immigration figures like Nigel Farage; orthodox free traders in the Conservative Party; and some on the left, who hoped the move would free up money to subsidize factory jobs in the country’s industrial north and, in any event, regarded the European Union as a bankers’ club that Britain was well out of.

“It’s not clear that signing this E.U. trade deal will give them more freedom to do that,” Mr. Matthijs said of the subsidies, noting that Britain had agreed to abide by constraints on how much state aid it can dole out to industry.

The paradox, he said, is that Britain is casting off from the European Union at a time when its two largest economies, Germany and France, are embracing some of the tenets of industrial policy that inspired Brexit.

A view of Redcar steelwork, which closed in 2015. Brexit campaigners argued that leaving the European Union would free up money to subsidize factory jobs in Britain.Credit…Andrew Testa for The New York Times

The pandemic has forced Brussels to reconsider policies it once shunned — initially in the form of a $913 billion coronavirus rescue package — that bring it closer to the ideas pushed by Brexiteers, like Mr. Johnson’s former chief adviser, Dominic Cummings. He was an architect of a plan to use public money to “level up” Britain’s economically disadvantaged north with its more prosperous south.

Liberating itself from the constraints of Brussels had been one of the biggest attractions of Brexit. Instead, Britain faces a much larger competitor that seems bent, like Britain itself, on transforming its economies with digital and “green” technology — and more open to using state aid to do so.

Another irony of Brexit is that Europe, alienated by the unilateral policies of Mr. Trump, has begun echoing some of the language used by Brexiteers in 2016. President Emmanuel Macron of France and others have spoken of the need for “European sovereignty” in the face of a less reliable United States. Mr. Johnson made reclaiming British sovereignty the leitmotif of his negotiations with Brussels.

Britain still has indisputable advantages as it charts a new course. Despite being devastated by the pandemic, its economy is flexible and resilient, at least relative to those on the European continent. It was the first Western country to approve a virus vaccine, while the European Union has been bogged down by the need for its members to move together.

Receiving a coronavirus vaccine in Cardiff, Wales, this month. The pandemic has exposed the vulnerabilities of far-flung supply chains.Credit…Andrew Testa for The New York Times

Mr. Matthijs predicted that Britain’s economy would snap back faster after the pandemic than those of Germany or France, which he said the Brexiteers would attribute to the freedom gained by shaking loose of Brussels.

Britain’s independence also affords it the chance to be experimental in its relations with other countries. Mr. Wright, for example, said the Biden administration might be interested in negotiating a different kind of economic understanding with Britain than an old-fashioned free trade agreement.

“They’re well positioned to be the guinea pig for this,” he said.

Britain, after all, just negotiated a deal unique in the annals of trade diplomacy — one that separates, rather than brings together, partners. Its ability to get that done, analysts said, is a hopeful sign for its ability to reshape itself yet again.

Nevertheless, “the world of June 2016 is not the world of today,” Mr. Wright said. “They know that as well, deep down.”

Genomes of two millipede species shed light on their evolution, development and physiology