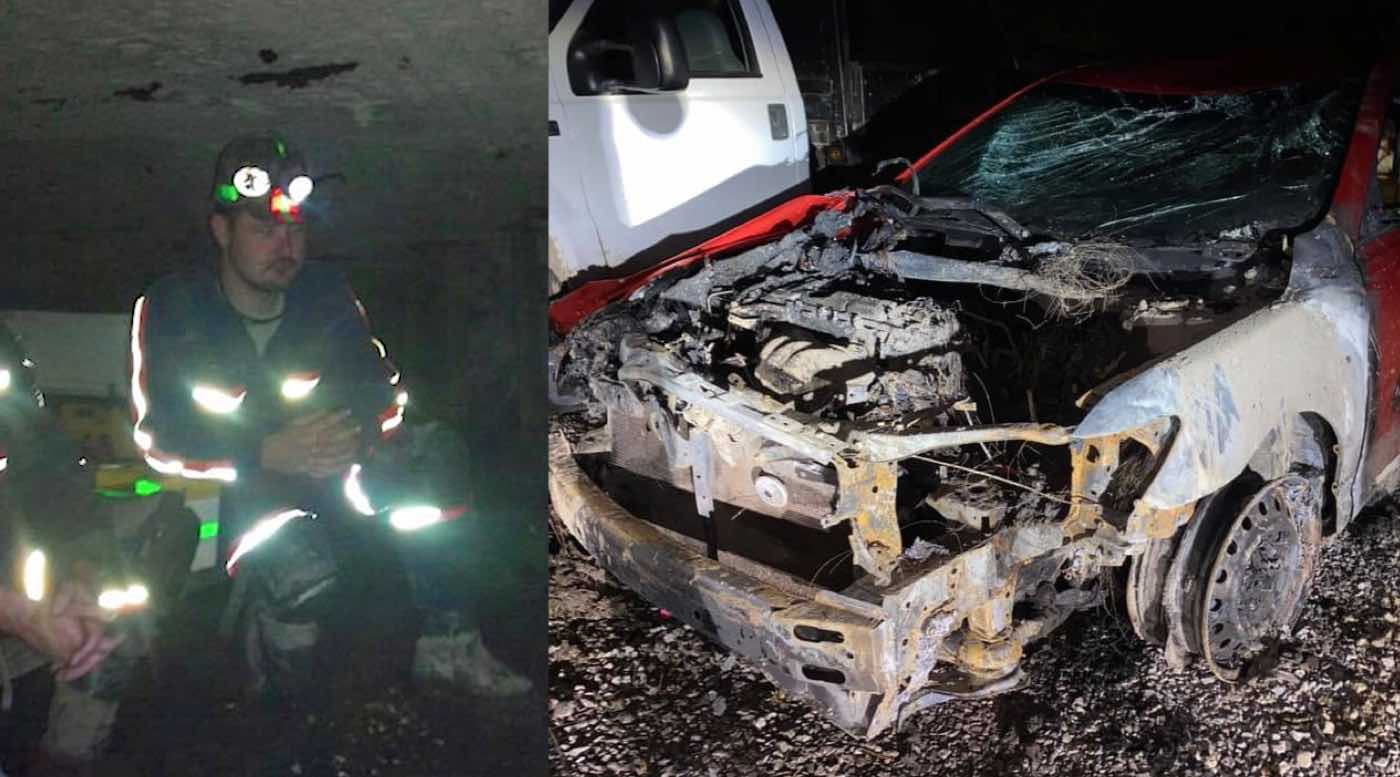 Mercedes Boggs knows she’s lucky to be alive. Boggs was on her way to work last month when her car hit a patch of ice, flipped on its side, and slid down an embankment coming to rest in a frigid creek.

After regaining consciousness, with cold water rushing in from the smashed windshield, Boggs realized she was trapped. That’s when a stranger appeared making his way toward her and Boggs somehow knew everything was going to be all right.

“When I saw him, it was just like everything was fine,” she told WVLT News-8. “I wasn’t even scared anymore. I just knew that that was like my saving grace.”

Neither one of them realized how very true that first impression would turn out to be.

The good Samaritan freed Boggs from her mangled vehicle. As he was helping her up the embankment, her car burst into flames. Had he come along half a minute later, Boggs would likely have perished in the ensuing inferno.

Kentucky coal miner John Burke was on his way home from working the night shift when he saw someone in serious trouble and stopped to help. After an ambulance crew arrived and took charge, Burke went on his way, but rather than sleeping when he got home, he spent the day wondering if the young woman he’d pulled from the wreckage was going to be okay.

Boggs was rushed to the hospital not even knowing the name of the person who’d saved her life. With no other way to contact him, she put out a Facebook plea in hopes of finding and thanking the man she now considered her guardian angel:

MORE: A Homeless Man in Atlanta Rescued All the Animals at a Shelter After it Caught on Fire

“… Please please share this in hope to help me find the man that saved my life, I owe him deeply. I would just like to speak to him. Without him, this situation would’ve been much different.”

Within a few hours, Boggs’ post was shared close to 900 times. Burke saw it and messaged her.

Boggs said when she spoke with him, Burke downplayed his role in her rescue. He didn’t think of himself as a hero, just someone who stopped to help, but Boggs and her family don’t agree.

POPULAR: Trucker Hero Pulls Over When He Sees ‘Frantic’ Man Running Up Highway After Wreck Flings His Toddler into the Dark

“Kids look up to like batman and superman and like those superheroes. That’s how I look at John now. He will forever be my hero,” told WVLT. “He was the person that saved my life.”

CHECK OUT: Watch Arizona Woman Frantically Pounding on Door to Save Family From Fire Just Before Roof Collapses

One more piece of good news? It looks like Boggs is doing well and on the mend.

Despite Being Bullied by the Boys, Woman Nailed Her Drum Solo in a Velvet Gown (MOTH Monday)

Unprecedented effort to ramp up testing technologies for COVID-19: RADx efforts seek to create capacity for 6 million daily tests by the end of 2020, address underserved populations

In Historic First, NASA Lands on Asteroid and Collects Samples of Debris That Helped Form Our Earth