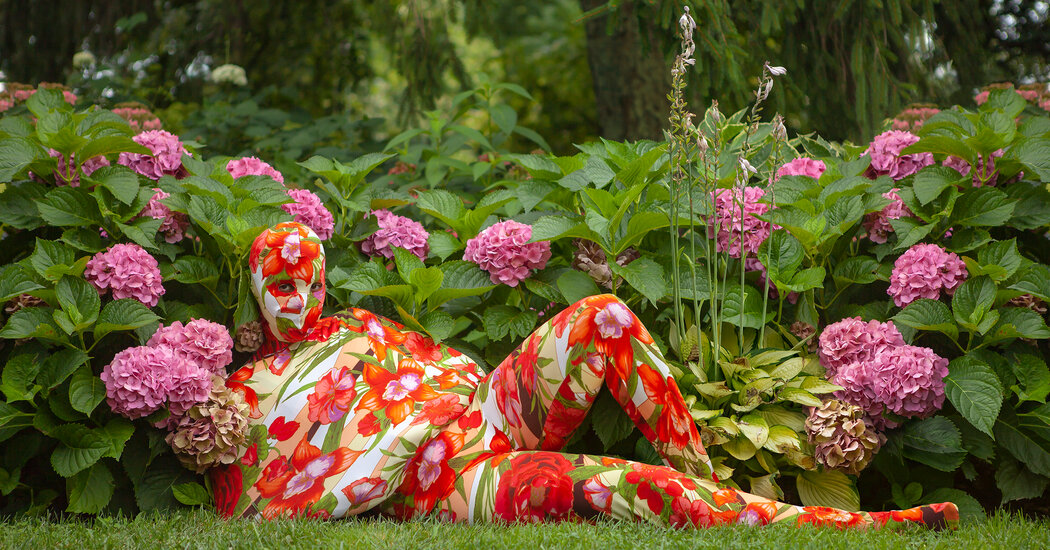 Our critics and writers have selected noteworthy cultural events to experience virtually.

ImageJoiri Minaya’s “Container No. 4” (2020), among the many artworks available at the Future Fair’s Holiday Market.Credit…Joiri Minaya; via Nico Wheadon

For “Treacherous With Old Magic,” one of the presentations at the Future Fair’s virtual Holiday Market, the curator and art adviser Nico Wheadon put together a group of artworks, each selling for no more than $5,000 (the fair’s price cap for pieces), made by female artists of color like Saya Woolfalk and Joiri Minaya. Woolfalk’s screen print “Encyclopedia of Cloud Divination (Plate 3),” which incorporates her signature Afrofuturist elements, is part of a collection that investigates how identities are formed and maintained.

By using a profit-sharing model, the Future Fair is trying to make exhibiting at an art fair more affordable for small- and medium-size galleries. Coming after the fair’s successful inaugural edition in May, this holiday event, on view until Sunday at futurefairs.com, includes selections by 36 art dealers at transparent and more accessible price points — a harbinger, perhaps, of the equity that might define all future fairs, not just this one.
MELISSA SMITH

Yo La Tengo performing last year in Portugal. On Friday, they will livestream their Hanukkah concert from the Green Space.Credit…Pedro Gomes/Redferns, via Getty Images

Many holiday traditions are in flux this year, and Yo La Tengo’s is no exception. The indie band’s annual-ish run of Hanukkah performances — inaugurated at Maxwell’s in Hoboken, N.J., circa 2001, and later relocated to Bowery Ballroom in Manhattan — has long drawn fans of all faiths.

This holiday, eight nights have been trimmed down to one: a livestream concert from the Greene Space on Friday at 8 p.m. (with encore streams the following day). As usual, viewers can expect surprise comedic and musical guests (last year’s included Sun Ra Arkestra and Fred Armisen). Tickets are $20; proceeds benefit the National Independent Venue Association.

For those who think the opuses of John Zorn can be sorted into discrete aesthetic silos — whether jazz, classical or even metal in nature — “The Turner Etudes” offers a corrective. Released this month by his Tzadik label, the suite of short pieces is a rich, internally varied set, performed by the pianist Stephen Gosling.

The fourth movement is reminiscent of projects from the gently reflective side of the composer’s palette; the 10th movement is a manic blast of modernism. Both contribute to the set’s extraordinary range of moods.

Also out this season is “Azoth,” a more jagged set of experimental chamber pieces written for a pair of cellists, Michael Nicolas and Jay Campbell. Put those releases together with a swinging-and-bracing piano trio set (“Calculus”) from earlier in 2020, and you’ll get a better sense of the composer’s pandemic-era output. Top it off with his lovely holiday album from 2011, “A Dreamers Christmas,” if you find yourself cheered by Zorn’s consistently protean energies.
SETH COLTER WALLS

Children may not have a Christmas feast at Grandma’s this year, but they can visit another older woman who would be delighted to have them for dinner — literally.

She’s the witch in Engelbert Humperdinck’s “Hansel and Gretel,” the centerpiece of the Metropolitan Opera’s free online Family Holiday Festival. From Thursday at 5 p.m. Eastern time until Monday at 5 p.m., on YouTube or Facebook, fairy-tale fans can stream Richard Jones’s English-language production, renowned for its deliciously macabre effects.

The festival’s other treats, which will remain on those platforms after their debuts (a schedule and registration are on the Met’s website), include an introduction to the opera on Thursday and a toque-making project on Friday. On Saturday, Melissa Clark, a New York Times food writer, will join the Met’s Anthony Roth Costanzo to lead families in baking witch-worthy brownies from her new cookbook, “Kid in the Kitchen.”

Sunday offers a carol-writing session, and Monday brings the icing on the cake: global solstice songs and a Zoom dance party.
LAUREL GRAEBER

From left, Logan Kruger, Jesse Obremski, Mark Willis and Brenna Monroe Cook of the Limon Dance Company in a scene from “The Moor’s Pavane.” which the company will perform on Saturday.Credit…Christopher Jones

In August, after a nearly four-month drought of live dance, the artists’ sanctuary Kaatsbaan Cultural Park in Tivoli, N.Y., became one of the first places to welcome back in-person performance with an open-air festival. The organization has continued to provide a refuge for dance, and this month has hosted the esteemed Limón Dance Company for a four-week bubble residency. As it draws to a close, the company will present a livestream on Saturday at 7 p.m. Eastern time (reservations on its website are required, and donations are suggested).

The program includes two classics by José Limón, a pillar of American modern dance: “The Moor’s Pavane” (1949), his famed dramatic quartet based on “Othello,” and “There Is a Time” (1956), which celebrates the seasonal cycle of rebirth. Joining those pieces is Chafin Seymour’s “Suite Donuts,” which features a mélange of music, from Erik Satie to the hip-hop group Slum Village. The fun new work was supposed to debut this summer at the American Dance Festival.
BRIAN SCHAEFER

QR Codes Are Here to Stay. So Is the Tracking They Allow.

A Painting of a Fiery Being From a Parallel Universe

The Imperial Editor Goes the Way of the Dodo