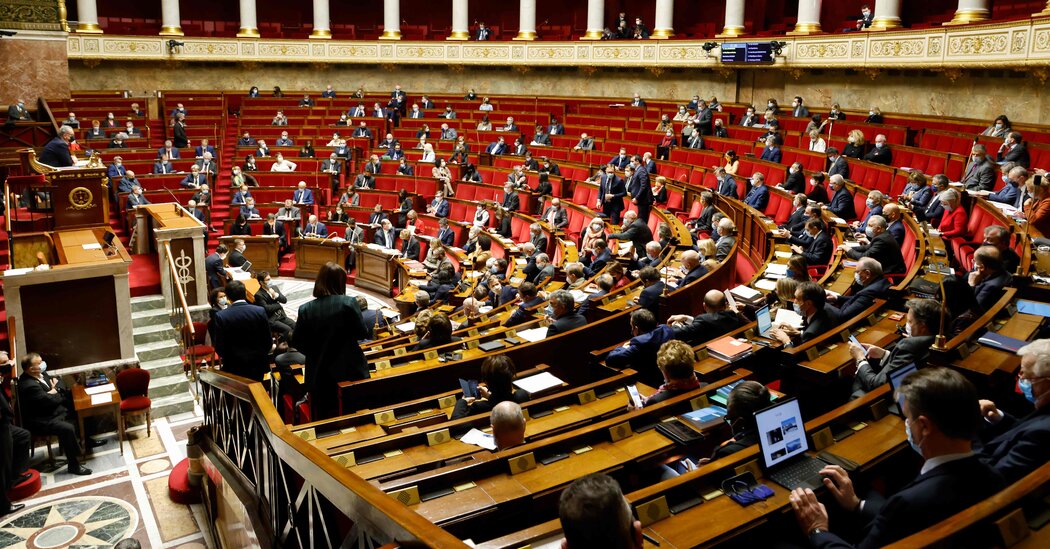 The bill faced hundreds of amendments but passed comfortably, despite opposition from left and right. It now goes to the Senate for final approval.

PARIS — The French National Assembly, after 135 hours of sometimes heated debate, adopted legislation with the anodyne official purpose of reinforcing “Republican principles” but the tough real objective of shutting down the sources of Islamist terrorism across the country.

Attacked by the left as an infringement of liberties and by the right as a weak compromise, the draft law reflects a decision by President Emmanuel Macron to defeat what he calls “Islamist separatism” and reinforce the unifying principles of French secularism, which affords no place in politics for religion. It will go to the Senate next month for final approval.

More than 300 amendments to the draft law were adopted, but it retained its core elements and was approved with 347 votes in favor, 151 against, and 65 abstentions. Mr. Macron’s dominant centrist party, La République en Marche, backed the bill.

With 15 months remaining before the presidential election, the left is in disarray, unable to identify a viable candidate. This has prompted Mr. Macron to embrace center-right territory for now. He hopes to lure voters who might otherwise vote for the right-wing Republicans or even for Marine Le Pen, the perennial rightist candidate whose weaknesses were again revealed in a televised debate last week.

The legislation, even in its more moderate final form, constitutes part of this strategy. It extends the requirement of strict religious neutrality beyond civil servants to anyone who is a private contractor of a public service — like bus drivers. It also creates a new offense of “separatism,” defined as threatening, intimidating or assaulting an elected official or a public-sector employee.

Samuel Paty, the schoolteacher beheaded by a young Islamist fanatic in October after attempting to teach principles of free speech by a showing a cartoon of the Prophet Muhammad, had received several online threats. Because the public school and its teachers are inseparable from the Republic’s self-image of equal opportunity for undifferentiated citizens, the killing has had a particular resonance.

In fact, core French principles have been fraying for some time in an atmosphere of growing social fracture and confrontation. Muslims, who make up about 8 percent of the population, have often found themselves in dismal projects on the periphery of big cities, feeling neither any attachment to the countries from which their forebears came nor any viable French identity or future. What was left for them was Islam, and in some cases an extremist violent deformation of it.

ImageIvry-sur-Seine, an eastern suburb of Paris. Muslims, who make up about 8 percent of the population, have often found themselves in dismal projects on the periphery of big cities.Credit…Dmitry Kostyukov for The New York Times

The legislation, containing 51 articles, attempts to curtail the avenues that may lead to such radicalization. It obliges community associations that receive public funds to sign a contract committing to the “principles of liberty, equality, fraternity, and respect of human dignity.” Any religious association receiving foreign funds will have to provide a strict accounting.

It bans so called “virginity certificates,” provided by some doctors for traditional religious marriages, and demands respect of the equality of men and women. Condoning terrorism becomes an offense that may lead to a ban on holding public office.

In the article that prompted the most virulent debate, and over 400 proposed amendments, it places severe limits on home-schooling without banning it, as originally proposed. Educating children at home is viewed by the government as a source of the “separatism” that undermines French values, as well as a means for conservative Muslim families to keep young girls from what they see as corrupting influences.

The bill was originally called the “anti-separatism” law, underscoring Mr. Macron’s conviction that every citizen must respect “the rules of the Republic because he or she is a citizen before being a believer or a nonbeliever.” It never mentions Islam or Islamism, a source of anger to right-wing parties.

The Socialist Party has deplored the choice of security measures rather than vastly expanded social programs to confront the rise of extremism in dismal suburbs where good schools and job opportunities are scarce.

For Ms. Le Pen’s National Rally, formerly the National Front, the legislation proved problematic. Its handful of representatives abstained in the final vote, having approved some of the articles and deplored others for not going far enough. Ms. Le Pen is maneuvering to look more presentable for an election next year in which polls suggest she will reach the second-round runoff and may even be elected.

Her efforts were not advanced, however, by a weak performance in a debate last week with Gérald Darmanin, the hard-line interior minister, who caught her getting statistics wildly wrong and suggested she had gone soft. “You need to start taking vitamins again, you are not tough enough, I find,” he said, as she looked on in painful bewilderment, having attempted a meandering explanation of why Islamism, an ideology she found hateful, had nothing to do with Islam, the religion, with which she had no quarrel.

Mr. Darmanin said in a statement issued after the vote that the bill would ensure “better protection for women who are victims of religious obscurantism,” by banning virginity certificates, affording them equality with men in inheritance issues, and safeguarding them from forced marriages, among other measures. Once again, Islam was not mentioned.