Navalny Says Russian Agent Confessed to Plot to Poison Him 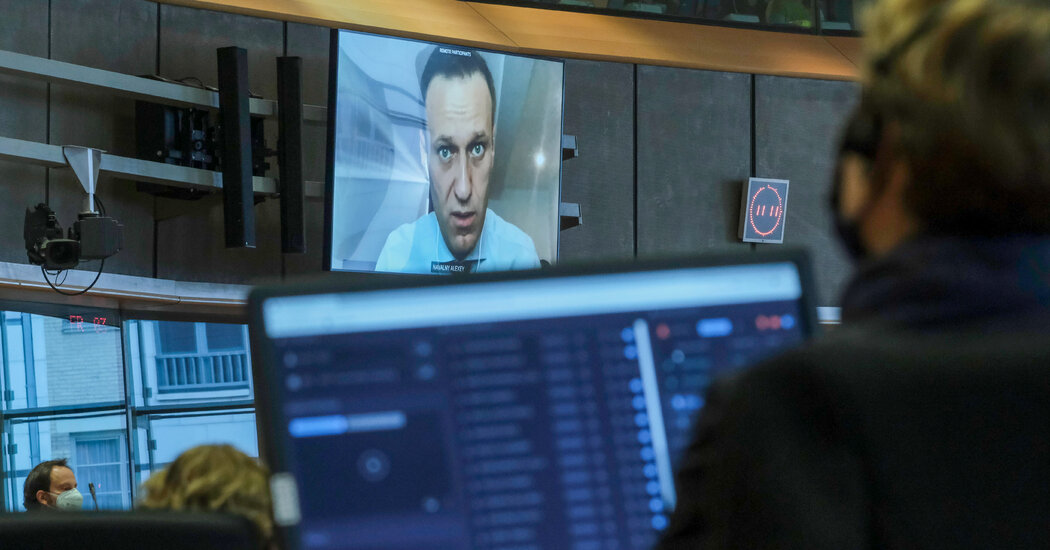 Aleksei A. Navalny, the Russian opposition leader, published a recording of a phone call in which he says he tricked a security official into exposing the plot.

Alexey Navalny, Russia’s opposition leader, speaking by video at a hearing of a committee of the European Parliament last month.Credit…Olivier Hoslet/EPA, via Shutterstock

MOSCOW — Aleksei A. Navalny, the Russian opposition leader recovering from a nerve agent attack, has made a career of needling his country’s sprawling security establishment.

On Monday, he produced perhaps his most brazen move yet: a video which he said shows him phoning a Russian intelligence officer and tricking him into confessing to a plot to kill Mr. Navalny by planting poison on his underpants.

“The priority was maximum secrecy,” the man can be heard telling Mr. Navalny over the phone. “So that no one could record it, no one saw anything they didn’t need to see, and so on.”

Mr. Navalny and Bellingcat, the open-source investigative outlet that published a report on Monday alongside the video, identified the man as Konstantin Kudryavtsev, a chemical weapons specialist at Russia’s domestic intelligence agency, the Federal Security Service, or F.S.B.

There was no independent confirmation that Mr. Navalny had indeed spoken to Mr. Kudryavtsev. The F.S.B., in a statement, called Mr. Navalny’s video a forgery, according to the RIA Novosti state news agency. His investigation was a “planned provocation aimed at discrediting the F.S.B.,” the statement said, “which could not have been carried out without the organizational and technical support of international intelligence agencies.”

Still, Mr. Navalny’s video of a purported 49-minute call with his own would-be assassin inside one of Russia’s most secretive and powerful intelligence agencies jolted the Russian internet, drawing more than seven million views on YouTube within hours. It was the latest episode to puncture the aura of power and professionalism of Russia’s spy services, a marked contrast to the news of a large-scale cyber intrusion in the United States attributed to Russian hackers.

And it put the Kremlin on the defensive yet again over Mr. Navalny’s poisoning, an event emerging as a pivotal moment for President Vladimir V. Putin as he enters his 22nd year in power.

Last week, Bellingcat published an investigation with a Russian news outlet, The Insider, that used leaked phone records to show that F.S.B. officers with expertise in poisons had trailed Mr. Navalny for years and were nearby at the time he was exposed to the military-grade nerve agent that nearly killed him in Siberia last summer.

In response, Mr. Putin denied that he was behind the near-deadly poisoning of his most prominent political opponent, telling journalists with a laugh that if Russian agents had wanted to kill Mr. Navalny, “they would have probably finished the job.”

The F.S.B., a successor agency to the K.G.B. that Mr. Putin ran before becoming president, has become a dominant behind-the-scenes force in Russian politics and business. The call Mr. Navalny released Monday added to the trove of evidence suggesting that the agency had organized — and botched — an assassination attempt against the country’s most prominent opposition politician.

According to last week’s Bellingcat report, three F.S.B. officers followed Mr. Navalny to Siberia in August where he was meeting with supporters in preparation for local elections. They trailed him to the Siberian city of Tomsk where, just after midnight on Aug. 20, telephone metadata showed one of the operatives near the hotel where Mr. Navalny and his team were staying, the report said.

Hours later, shortly after taking off on a flight from Tomsk to Moscow, Mr. Navalny was heard screaming in the airplane bathroom before collapsing. The pilot made an emergency landing in Omsk, another Siberian city. By the time Mr. Navalny arrived at a hospital there, he was in a coma.

Days later, another F.S.B. officer — Mr. Kudryavtsev — flew to Omsk from Moscow and stayed there for just 10 hours, according to Bellingcat.

Mr. Navalny called the man he said was Mr. Kudryavtsev last Monday, hours before he and Bellingcat released the investigation identifying Mr. Kudryavtsev and seven other members of the F.S.B. team that reportedly tried to poison Mr. Navalny.

Mr. Navalny used caller-I.D.-spoofing software to make it look as if he were calling from an F.S.B. landline, and introduced himself as an aide to a senior Russian security official preparing an urgent report on what went wrong in the mission.

According to a Bellingcat report, three Russian agents followed Mr. Navalny to Siberia in August. Telephone metadata showed one of them near the Xander hotel, where Mr. Navalny was staying, hours before he collapsed from poisoning.Credit…Maxim Shemetov/Reuters

Mr. Navalny first similarly tried to trick another F.S.B. officer on the team, who responded, “I know exactly who you are,” and hung up, according to Bellingcat. But Mr. Kudryavtsev apparently took the bait.

Under questioning from Mr. Navalny, who pretends to be a no-nonsense official rushing to meet a deadline, the man identified as Mr. Kudryavtsev acknowledges that the mission’s aim was to kill Mr. Navalny. He says that Mr. Navalny was saved by the commercial airline pilot who made an emergency landing and by the ambulance workers who treated Mr. Navalny on the tarmac in Omsk.

“So you believe that this person of interest survived only because they landed the plane too soon?” Mr. Navalny asks on the video.

“I believe so, yes,” the man identified as Mr. Kudryavtsev responds, heard on speakerphone in the video. “If it had taken just a little bit longer then, possibly, everything would have ended differently. You see, this is where coincidence is the worst factor we can have in our work.”

German military scientists determined in September that Mr. Navalny had been poisoned with one of the Russian-made Novichok family of nerve agents. In the video released Monday, Mr. Navalny coaxes out a new detail: that the poison was planted on the inside of Mr. Navalny’s blue underpants.

“On the groin area of the underpants?” Mr. Navalny asks.

“Well, the so-called codpiece,” the man responds. “There are seams there, it was along the seams.”

Mr. Navalny remains in Germany, where he was flown for treatment after the August attack, but last week he renewed his vow to return to Russia once he recovers.

Late Monday, a top ally of Mr. Navalny, Lyubov Sobol, tried to visit Mr. Kudryavtsev at his home in Moscow. She was detained by the police and faced a charge of disobeying a police officer, her staff said on Twitter.

The Kremlin has long tried to minimize Mr. Navalny’s significance, while insisting he is backed by American intelligence agencies; Russian officials avoid mentioning his name in public. Last week, Mr. Putin’s spokesman, Dmitri S. Peskov, said he would no longer comment on “the patient.”

But Monday’s video was sure to renew questions about Mr. Navalny, while undermining the image of the F.S.B. as one of the world’s premier spy agencies.

“I’m sorry, I have a question,” the man identified as Mr. Kudryavtsev says at the end of the phone call with Mr. Navalny. “Is it OK that we talked on a normal phone line?”