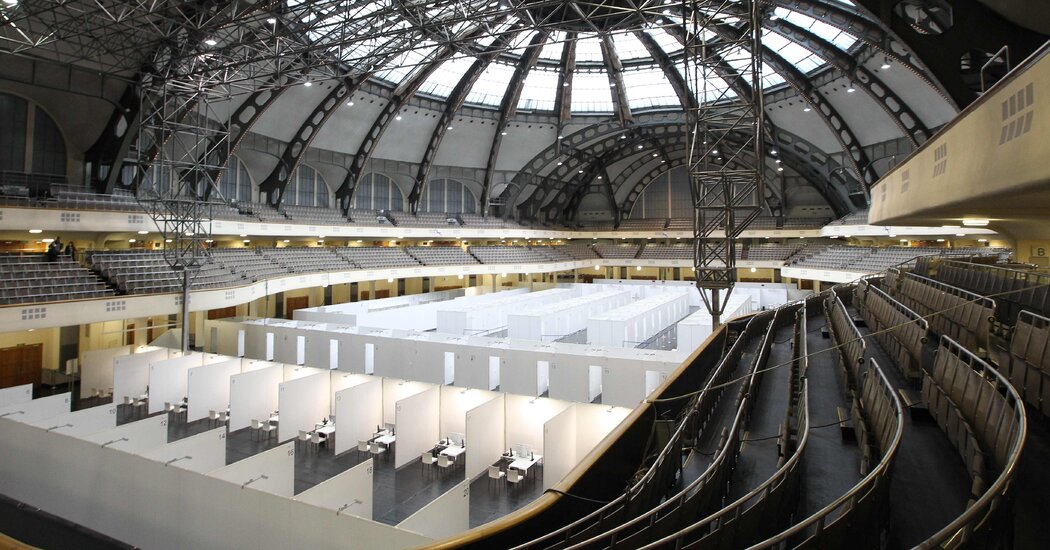 In a landmark collective undertaking, the bloc is poised to start distributing shots to all 27 member nations and their 410 million citizens.

A vaccination center in Frankfurt. The operation to buy, approve and distribute coronavirus shots across the European Union has been complex and politically charged.Credit…Daniel Roland/Agence France-Presse — Getty Images

BRUSSELS — From Stockholm to Athens and from Lisbon to Warsaw, European Union governments are gearing up to receive a coronavirus vaccine later this week, even as cases keep rising in some parts of the continent.

The bloc formally approved the Pfizer-BioNTech vaccine on Monday, setting off a logistical marathon the likes of which most of the authorities in the region have not had to contend with before.

The operation to buy, approve and distribute the shots across the European Union has been complex and politically charged, and the stakes could not be higher. The pandemic’s second wave is still raging in parts of the region, most Europeans are spending the holidays in some type of lockdown, and the bloc’s economies are in tatters.

To further complicate matters, a highly contagious variant in England led many European countries over the weekend to block travelers from Britain, although scientists say it has already reached the continent.

If the vaccine mission is successful, it may bolster the credentials of the European Union, establishing its administration as a real force with executive powers and capabilities that can take on important tasks on behalf of its members. If not, the failure may spread acrimony and disaffection.

The European Medicines Agency, the bloc’s drug authority, gave its approval on Monday, after coming under intense scrutiny for the pace at which it reviewed the Pfizer-BioNTech vaccine. Britain granted the vaccine emergency approval weeks ago and then started rolling out its inoculation program, with the United States following not far behind.

In the end, the European agency decided to speed up the process, moving forward an approval meeting that had been set for Dec. 29. The United States has also approved a vaccine from Moderna, but the European agency will not address the application for authorization of that company’s shots until Jan. 6.

The agency’s authorization for the Pfizer-BioNTech vaccine was followed a few hours later by the final step, when the European Commission, the executive arm of the European Union,gave its approval, giving the green light for Pfizer to start distributing vaccines across the region.

“As we have promised, this vaccine will be available for all European countries at the same time, under the same conditions,” said Ursula von der Leyen, the European Commission president. “Let me say how proud I am that the first Covid vaccine available in Europe is a true product of the European innovation.”

Image Cold-storage shipping boxes at a cargo center near Brussels. Tracking the temperature of the Pfizer-BioNTech vaccine throughout its journey from factory to injection will be a huge challenge.Credit…Virginia Mayo/Associated Press

The commission hands over responsibility for this first load as the cargo departs Pfizer factories in Puurs, Belgium, and in Mainz, Germany, headed for European capitals, most likely on Thursday. The company, which declined to answer detailed questions about transportation plans for security reasons, will play an active role in vaccine transport and storage in each country.

From that point on, each of the bloc’s 27 member governments will be responsible for distributing the vaccine to its population in a manner that fits each country’s needs, priorities and capabilities.

The pressure to get this right, and to do so quickly, has been mounting as the European Union and its members try a collective approach in a critical node in the fight against the pandemic. Most countries have been more nationalistic.

The European approach began with the decision this summer to pool negotiating capital and to empower the European Commission and a board of representatives from every member country to reach agreements with pharmaceutical companies working on vaccines.

An intensive care unit in Porto, Portugal, last month. There has been criticism that the European Union did not order enough doses of the Pfizer-BioNTech vaccine when given a chance.Credit…Patricia De Melo Moreira/Agence France-Presse — Getty Images

In Germany, the bloc’s biggest economy and home to BioNTech, the decision to empower the European Commission to negotiate a deal has attracted criticism, with some arguing that the country would have been better off going it alone. But most bloc members are midsize countries or smaller, and for them, the approach made sense. (As the clock counts down to Brexit, some may also see a potent political message here, with the bloc showing that there is strength in unity.)

Still, if the process has been unified to this point, the rollout will now start to look quite different from country to country.

Germany plans to start immunizing people older than 80 and others who live in care homes on Dec. 27, a day or two after the 400,000 doses it has ordered are expected to arrive. The plan is for the first vaccinations to be carried out by teams of doctors visiting nursing homes. In the first weeks of January, hundreds of immunization centers set up in halls, gyms and theaters will open.

For many Germans, it was hard to see a vaccine developed by their own citizens win approval and start to be administered in Britain weeks before it was scheduled to arrive in their own country.

But the country’s health minister, Jens Spahn, has pushed back against criticism.

“It gives a lot of credence to trust and responsibility across Europe that we are doing this together,” Mr. Spahn told reporters last week. “‘We’ are stronger than ‘I’,” he said.

France, the region’s second-largest economy, will also start shots by the end of the month. But the authorities there face an added challenge: vaccine skepticism. A recent poll indicated that only 41 percent of those surveyed were planning to get the injections.

A coronavirus screening center in Le Havre, France, this month. The pandemic’s second wave is still raging in parts of Europe.Credit…Andrea Mantovani for The New York Times

Italy and Spain, two of the worst-hit European countries, are also moving fast, with at least some vaccinations of the most vulnerable people taking place by the end of this month. The bulk will begin in January.

It has not been lost on health officials across Europe that the first vaccinations may carry outsize symbolic value in the campaign to rally weary and sometimes skeptical populations.

What You Need to Know About the Vaccine Rollout

In Greece, the inoculation drive has been called Operation Freedom by a government eager to win over reluctant citizens. A recent opinion poll there suggested that three in 10 Greeks did not intend to be vaccinated, citing concerns about efficacy and safety, with another three in 10 saying that they were skeptical.

In Italy, Alessio D’Amato, the top health care official in the Lazio region, which includes Rome, told the Italian newspaper Corriere della Sera that the first person to be vaccinated there “will be a nurse and will be a woman — just like in New York.”

As yet, no E.U. country has announced plans to make the vaccine mandatory.

And while there is pressure to vaccinate the most people in the least amount of time, experts warn that the authorities should not move too fast, especially if they are not confident in their countries’ infrastructure.

“The best approach, especially if there are concerns with the logistics, is to go slowly and steadily,” said Prof. Jean-Michel Dogné of the University of Namur, Belgium, an adviser to the European Medicines Agency.

“Nothing worse can happen than vaccinating someone with a vaccine that we can’t guarantee the quality for,” he said.

The biggest challenge for any country, Professor Dogné said, will be to track the temperature of the Pfizer-BioNTech vaccine — which requires an exceptionally low storage temperature — throughout its journey from factory to injection.

The inoculation campaign will get going in earnest in the European Union in the first quarter of 2021, and most governments hope to have large swaths of their populations vaccinated by June.

Athens, this month. A recent opinion poll suggested that three in 10 Greeks did not intend to be vaccinated.Credit…Louisa Gouliamaki/Agence France-Presse — Getty Images

Pfizer and the European Commission say they are working on a specific schedule for future vaccine deliveries but have not offered details. Revving up production is a challenge for the company, which is serving multiple clients, and European governments have expressed worry the supply could become a trickle.

Professor Dogné said that was all the more reason to get it right and to make sure that none of the precious doses were squandered.

“This is an unprecedented operation,” he said. “We mustn’t waste a drop.”

Reporting was contributed by Melissa Eddy from Berlin; Aurelien Breeden from Paris; Emma Bubola from Rome; Monika Pronczuk from Warsaw; Niki Kitsantonis from Athens; and Raphael Minder from Madrid.

A Conversation on ‘Go Tell It on the Mountain’