A Portrait of 19th-Century Creole Culture 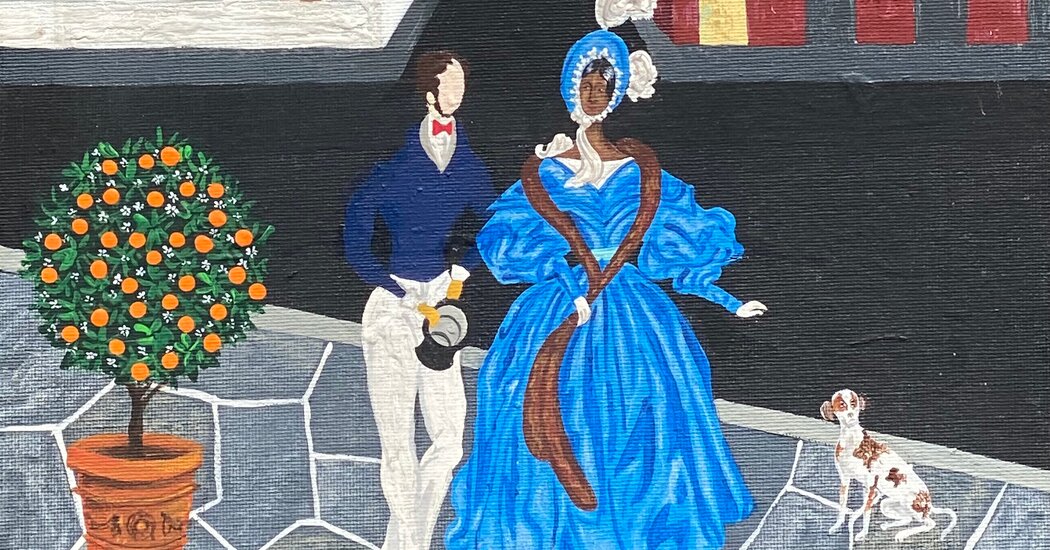 In an unfinished painting, the artist Andrew LaMar Hopkins depicts an interracial couple in 1830s Alabama.

In each installment of The Artists, T highlights a recent or little-shown work by a Black artist, along with a few words from that artist putting the work in context. This week, we’re looking at an unfinished canvas by Andrew LaMar Hopkins, a self-taught painter known for his faux-naïve depictions of life in the antebellum Gulf States. His first solo show, “Créolité,” was on view at Venus Over Manhattan in New York this fall.

Based in: Savannah, Ga., and New Orleans

Originally from: Mobile, Ala.

When and where did you make this work? I started this painting a decade ago in Mobile but left it unfinished and kept it in storage for eight years. When I rediscovered it this past summer, I began working on it again.

Can you describe what is going on in the work? A Black person and a white person could not legally be married in the States in the 18th century and first half of the 19th century. But the custom of plaçage, an extralegal system that allowed white men to formally enter into relationships akin to common-law marriages with people of color, was common in the French and Spanish slave colonies of North America during the antebellum period. As part of these arrangements, which were also known as mariages de la main gauche, or “left-handed marriages,” a man would often set up a woman with her own household and, if she was enslaved, secure her freedom. This painting shows an interracial couple in Mobile in the 1830s. The scenery behind them is based on an 1839 engraving that depicts a fire in the city that destroyed 500 buildings. Because of this engraving, we know what some of these structures — including the Merchants and Planters Bank, on the left side of the painting, which was built a few years before the fire, in 1837 — looked like.

What inspired you to make this work? Some white men in antebellum Mobile would have a woman of color as a consort but legally marry a white woman, while others chose instead to live openly with their Black partner and their children by her. These mixed-race children became part of the so-called gens de couleur libres, or “free people of color,” who lived in pre-Civil War Mobile, New Orleans, Saint-Domingue and other places with French colonies of enslaved people. I made this work because this is a historical narrative that’s not talked about in schools or history books.

What’s the work of art in any medium that changed your life? Seeing Leonardo da Vinci’s “The Virgin of the Rocks” (c. 1483-86) up close at the National Gallery in London brought me to tears and spoke to my soul. It was hard to imagine human hands could create something so timeless and beautiful.

A Racial Slur, a Viral Video, and a Reckoning