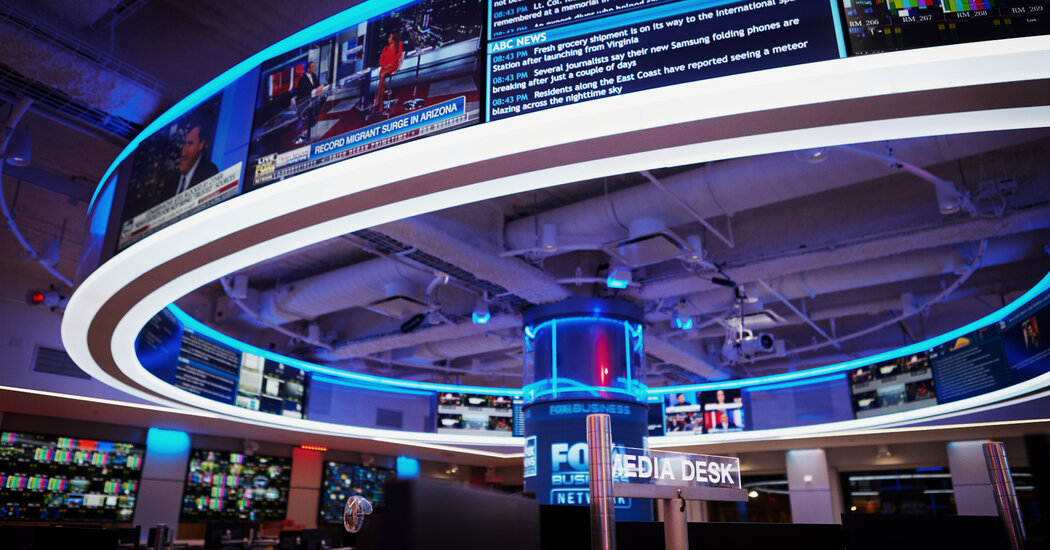 On Oct. 12, 2020, Fox News agreed to pay millions of dollars to the family of a murdered Democratic National Committee staff member, implicitly acknowledging what saner minds knew long ago: that the network had repeatedly hyped a false claim that the young staff member, Seth Rich, was involved in leaking D.N.C. emails during the 2016 presidential campaign. (Russian intelligence officers, in fact, had hacked and leaked the emails.)

Fox’s decision to settle with the Rich family came just before its marquee hosts, Lou Dobbs and Sean Hannity, were set to be questioned under oath in the case, a potentially embarrassing moment. And Fox paid so much that the network didn’t have to apologize for the May 2017 story on FoxNews.com.

But there was one curious provision that Fox insisted on: The settlement had to be kept secret for a month — until after the Nov. 3 election. The exhausted plaintiffs agreed.

Why did Fox care about keeping the Rich settlement secret for the final month of the Trump re-election campaign? Why was it important to the company, which calls itself a news organization, that one of the biggest lies of the Trump era remain unresolved for that period? Was Fox afraid that admitting it was wrong would incite the president’s wrath? Did network executives fear backlash from their increasingly radicalized audience, which has been gravitating to other conservative outlets?

Fox News and its lawyer, Joe Terry, declined to answer that question when I asked last week. And two people close to the case, who shared details of the settlement with me, were puzzled by that provision, too.

The unusual arrangement underscores how deeply entwined Fox has become in the Trump camp’s disinformation efforts and the dangerous paranoia they set off, culminating in the fatal attack on the Capitol 11 days ago. The network parroted lies from Trump and his more sinister allies for years, ultimately amplifying the president’s enormous deceptions about the election’s outcome, further radicalizing many of Mr. Trump’s supporters.

The man arrested after rampaging through the Capitol with zip-tie handcuffs had proudly posted to Facebook a photograph with his shotgun and Fox Business on a giant screen in the background. The woman fatally shot as she pushed her way inside the House chamber had engaged Fox contributors dozens of times on Twitter, NPR reported.

High profile Fox voices, with occasional exceptions, not only fed the baseless belief that the election had been stolen, but they helped frame Jan. 6 as a decisive day of reckoning, when their audience’s dreams of overturning the election could be realized. And the network’s role in fueling pro-Trump extremism is nothing new: Fox has long been the favorite channel of pro-Trump militants. The man who mailed pipe bombs to CNN in 2018 watched Fox News “religiously,” according to his lawyers’ sentencing memorandum, and believed Mr. Hannity’s claim that Democrats were “encouraging mob violence” against people like him.

Image Eric G. Munchel, left, was arrested last Sunday by the F.B.I in connection with the storming of the Capitol.Credit…Win Mcnamee/Getty Images

And yet, as we in the media reckon with our role in the present catastrophe, Fox often gets left out of the story. You can see why. Dog bites man is never news. Fox’s vitriol and distortions are simply viewed as part of the landscape now. The cable channel has been a Republican propaganda outlet for decades, and under President Trump’s thumb for years. So while the mainstream media loves to beat itself up — it’s a way, sometimes, of inflating our own importance — we have mostly sought less obvious angles in this winter’s self-examination. The Washington Post’s Margaret Sullivan concluded last week that the mainstream press is “flawed and stuck for too long in outdated conventions,” but “has managed to do its job.” MSNBC’s Mehdi Hasan said the media had “failed” by normalizing Trump.

I took my turn last week, writing about how a man I worked with at BuzzFeed played a role in the insurrection. One thoughtful reader, a former engineer at Corning, wrote to me to say she’d been reckoning with a similar sense of complicity. The engineer was on the team that developed the thin, bright glass that made possible the ubiquitous flat screen televisions that rewired politics and our minds. She’s now asking herself whether “this glass made it happen.”

When I shared the engineer’s email with some others at the Times, one, Virginia Hughes, a Science editor and longtime colleague, responded: “Everyone wants to blame themselves except the people who actually deserve blame.”

And so let me take a break from beating up well-intentioned journalists and even the social media platforms that greedily threw open Pandora’s box for profit.

There’s only one multibillion-dollar media corporation that deliberately and aggressively propagated these untruths. That’s the Fox Corporation, and its chairman, Rupert Murdoch; his feckless son Lachlan, who is nominally C.E.O.; and the chief legal officer Viet Dinh, a kind of regent who mostly runs the company day-to-day.

Rupert and Lachlan Murdoch at the Allen & Company media and technology conference in Sun Valley, Idaho, in 2018.Credit…David Paul Morris/Bloomberg

These are the people ultimately responsible for helping to ensure that one particular and pernicious lie about a 27-year-old man’s death circulated for years. The elder Mr. Murdoch has long led Fox, to the extent anyone actually leads it, through a kind of malign negligence, and letting that lie persist seems just his final, lavish gift to Mr. Trump.

The company paid handsomely for it, according to Michael Isikoff of Yahoo News, who first reported on the settlement and has covered the case extensively.

The Murdoch organization didn’t originate the lie, but it embraced it, and it served an obvious political purpose: deflecting suspicions of Russian involvement in helping the Trump campaign. That’s why the story was so appealing to Fox hosts like Sean Hannity and Lou Dobbs, who kept hyping it for days after it collapsed under the faintest scrutiny. There has never been a shred of credible evidence that Seth Rich had contact with WikiLeaks, and a series of bipartisan investigations found that the D.N.C. had been breached by Russian hackers.

The story of Fox’s impact on the fracturing of American society and the notion of truth is too big to capture in a single column. But the story of its impact on one family is singular and devastating. Seth Rich’s brother, Aaron, reflected on it Friday from his home in Denver, where he’s a software engineer. Seth was his little brother, seven years younger and two inches shorter, but more at ease with people, more popular, better at soccer in high school.

Mary Rich, the mother of Seth Rich, at a news conference on Aug. 1, 2016, several weeks after he was murdered in Washington, D.C.Credit…Michael Robinson Chavez/The Washington Post, via Getty Images

Seth Rich was murdered in the early morning of Sunday, July 10, 2016, on a sidewalk in the Bloomingdale neighborhood of Washington, D.C. Aaron was still wrestling with the shock, reeling from the worst week of his life, when a friend told him that something was happening on Reddit. A news story had mentioned that Seth was a staff member at the Democratic National Committee. While some of the top comments were simply condolences, the lower part of the page was full of unfounded speculation that the young D.N.C. employee — not the Russians — had been WikiLeaks’ source of the hacked emails. Julian Assange of WikiLeaks encouraged the speculation, but it remained low-level chatter about confusing theories for about 10 months. That’s when Fox claimed that an anonymous federal investigator had linked Seth Rich to the leak.

The story took off. It was like “throwing gasoline on a small fire,” Mr. Rich’s brother recalled in a telephone interview from his home in Denver. “Fox blew it out of everyone’s little echo chamber and put it into the mainstream.”

The story collapsed immediately, and in spectacular fashion. The former Washington, D.C., police detective whom Fox used as its on-the-record source, Rod Wheeler, repudiated his own quotes claiming ties between Mr. Rich and WikiLeaks and a cover-up, and said in a deposition this fall that the Fox News article had been “prewritten before I even got involved.”

“It fell apart within the general public within 24 hours,’’ Aaron Rich recalled, yet “Hannity pushed it for another week.” Finally, Aaron Rich said, he sent Mr. Hannity and his producer an email, and the barrage stopped, but he said he never received an apology from the Fox host.

“He never got back to me to say, sorry for ruining your family’s life and pushing something there’s no basis to,” he said. “Apparently, ‘sorry’ is a hard five-letter word for him.”

A Fox News spokeswoman, Irena Briganti, declined to comment on Mr. Rich’s request for an apology.

Fox also pulled the story down a week after it was published, with an opaque statement that “the article was not initially subjected to the high degree of editorial scrutiny we require for all our reporting.”

The damage had been done. The story is still in wide circulation on the right, to the point where Mr. Rich was reluctant to share a photograph of himself and his brother for this story with The New York Times. Every time he has done that, he said, the photo — of the brothers at Aaron’s wedding, for instance — has been reused and tainted by conspiracy theorists.

Aaron Rich, who with his brother grew up in Nebraska, said he hadn’t thought much about who beyond Fox’s talent was responsible for the lies about his brother. When I asked him about Rupert Murdoch, he wasn’t sure who he was — “I’m really bad at trivia things.” That’s the genius of the Murdochs’ management of the place: They collect the cash while evading responsibility and letting their hosts work primarily for Mr. Trump.

Mr. Rich isn’t party to the settlement with his parents, and he declined to discuss its details. His parents said in a court filing that the barrage of conspiracy theories had damaged their mental health and cost his mother, Mary, her ability to work and to socialize.

But he said he simply doesn’t understand why Fox couldn’t simply apologize for its damaging lie — not in May of 2017, not when it reached the settlement in October, and not when it finally made the settlement public after the election and wished his family “some measure of peace.”

It reminds me of a well-known political figure now leaving the stage, one who has been strikingly allergic to apologizing, expressing any empathy or engaging in any soul searching about his role in mobilizing the ugliest of American impulses.

“I was glad they stopped doing it,” Seth Rich’s brother said, a bit hopelessly. “But they never admitted they lit the fire.”