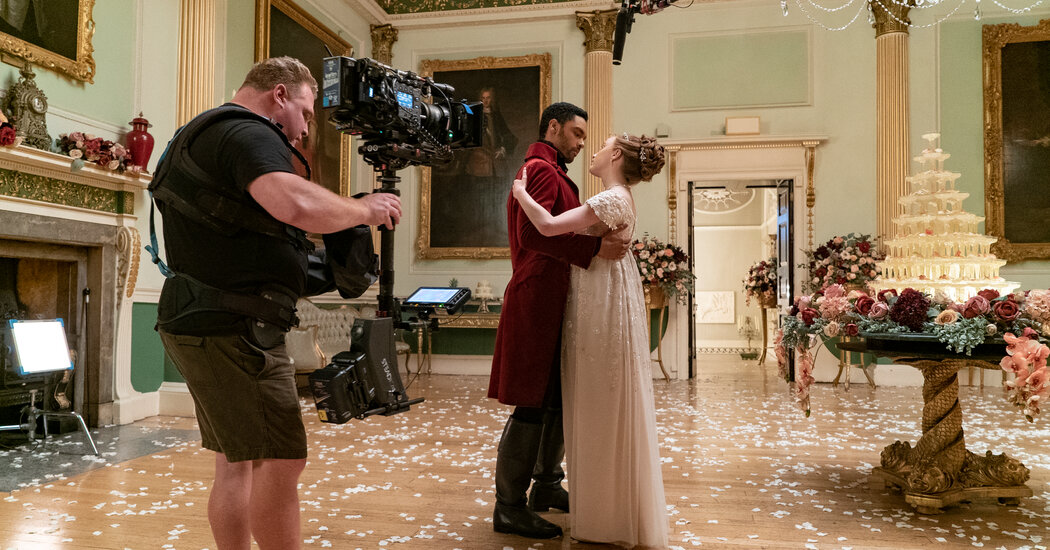 Shonda Rhimes generally doesn’t pay much attention to the breathless fan chatter around her television shows. (It’s because she’s too busy, she said, not because she doesn’t care.)

But in the lead-up to the premiere of “Bridgerton,” the first original Netflix show under the Shondaland banner, she found herself watching a fan video in which a young woman plays the show’s trailer and records her in-the-moment reactions. In the video, the YouTuber, a devotee of romance novels, said that television was finally taking her genre seriously, Rhimes recalled.

The prolific showrunner does not consider herself an avid romance reader, but she devoured Julia Quinn’s “Bridgerton” series about the moneyed marriage market of 19th century England, and like the fan, she did not understand why more books of that genre have not been adapted onto the screen, while Jane Austen novels have been wrung dry.

“It’s fascinating to me that no one has really done it before,” said Rhimes, an executive producer on the show. “Romance novels really lend themselves to the TV genre. They’re visual; they’re well paced; they have great plots.”

Depending on the reception of “Bridgerton,” all eight episodes of which land on Netflix on Christmas Day, television producers may choose to explore the genre more often.

The show is a career landmark for Rhimes, the first series in her exclusive, nine-figure deal with Netflix after a string of hits for ABC made her one of TV’s most successful showrunners. Rhimes created “Grey’s Anatomy,” “Private Practice” and “Scandal,” and was an executive producer for several other shows on the network, including “How to Get Away With Murder,” before signing her multiyear pact with Netflix in 2017. (Currently in its 17th season, “Grey’s Anatomy” remains on ABC without Rhimes’s involvement, though Netflix already had the streaming rights for the back library before the deal.)

With its speedy pacing, fervent monologues and strong matriarchal characters, “Bridgerton” bears Rhimes’s unmistakable imprint. But the person tasked with bringing the show to life was her protégé, the showrunner Chris Van Dusen, who started as Rhimes’s assistant on “Grey’s Anatomy” 15 years ago and eventually rose to co-executive producer of “Scandal.”

When “Scandal” was in its final season, Rhimes recalled, she handed the first “Bridgerton” novel, “The Duke and I,” to Van Dusen and said, “Make this into a series.” So he did, wrapping the filming just a couple of weeks before the coronavirus pandemic shut down television production across the globe.

The show aims to be a vibrant and indulgent dose of escapism, setting luxurious ball gowns against a backdrop of lush garden parties as the young ladies and gentlemen of Regency-era England try to find love — or at least a bearable spouse. Classical interpretations of pop songs, like a cover of Ariana Grande’s “Thank U, Next” by the Vitamin String Quartet, lend a playful note while narration by Julie Andrews enhances the production’s elegant veneer. (“She elevates everything,” Rhimes said.)

But Van Dusen did not want a story that was informed exclusively by the 19th century, which he worried would make “Bridgerton” feel too uptight. Instead, he imagined a show that reflected today’s society through a racially diverse cast and lustful scenes shot from the “female gaze.” The result reflects the trappings of the early 1800s — bows and curtsies, bushy sideburns, pushed-up bosoms — while diverging from the historical reality enough to excite today’s audience.

“Bridgerton” unfolds during a frenzied social season, with unmarried ladies and gentleman pairing off at elaborate balls.Credit…Netflix

In “Bridgerton,” a wide-eyed debutante named Daphne Bridgerton (played by Phoebe Dynevor), a daughter of a widowed viscountess, enters the marriage market just as a mysterious writer who calls herself Lady Whistledown, voiced by Andrews, debuts an anonymous gossip column that plumbs the personal lives and social interactions of London’s high society. A frenzied social season ensues, during which each carefully choreographed ball features throngs of desperate unmarried ladies and gentlemen and their hovering mamas (pronounced muh-MAHs).

One of the show’s most dramatic departures from its period is immediately apparent: Black actors star not only as landowning aristocracy — including Daphne Bridgerton’s love interest, the Duke of Hastings — but as the queen herself, a majestic but mercurial sovereign played by Golda Rosheuvel.

Cast diversity is another of Rhimes’s signatures. But in this case, given the historical setting and the overwhelming whiteness of most 19th-century costume dramas — consider almost any Austen adaptation — it raised a pertinent question: How and to what extent should “Bridgerton” address race?

The solution came from Van Dusen, who had learned that some historians believe that the reigning queen at the time, Queen Charlotte, was the descendant of a Portuguese royal family with African ancestry. (The long-running debate over Queen Charlotte’s race was revived when Meghan Markle got engaged to Prince Harry in 2017, which led journalists and historians to consider whether she would be the first Black British royal.)

“Bridgerton” feels more modern than many period dramas but it still qualifies as indulgent escapism, with lush costumes and sets.Credit…Liam Daniel/Netflix

Van Dusen’s idea was to base the show in an alternative history in which Queen Charlotte’s mixed race heritage was not only well-established but was transformative for Black people and other people of color in England.

“It made me wonder what that could have looked like,” he said. “Could she have used her power to elevate other people of color in society? Could she have given them titles and lands and dukedoms?”

When Netflix began releasing news about “Bridgerton” and its cast, many referred to the approach as colorblind casting, which was irksome to the creators. “That would imply that color and race were never considered,” Van Dusen said, “when color and race are part of the show.”

Though it is not explained until the middle of the season, the character of Queen Charlotte — who is brought to life with towering coiffures, pet Pomeranians and a hunger for gossip — provides the explanation for the diverse gentry. It was she who bestowed nobility upon the Duke of Hastings’ predecessors, positioning him to inherit a dukedom.

For Regé-Jean Page, the actor who plays Simon Basset, the Duke of Hastings, it was important not to ignore the role that race played in the show.

“There’s a difference between showing brown skin onscreen and representing brown people onscreen,” said Page, 30. He performs the role of the duke with the swagger and devilish smirk of a man who has sworn off marriage but has countless suitors. (The show was shot partly in grand English country homes, and Page allowed that strutting in calf-length riding boots through the opulent mansions made it easier to get into character.)

Queen Charlotte, played by Golda Rosheuvel, was based loosely on the actual Queen Charlotte, who some historians believe was of African descent.Credit…Liam Daniel/Netflix

Period dramas often underestimate the presence of people of color in England in earlier centuries, portraying the society as whiter than it likely was, said Hannah Greig, a historian of 18th and 19th century Britain who was a consultant on “Bridgerton.” So while the show cast Black actors in positions of power that they would not have occupied at the time, it also featured Black characters in historically accurate roles. For example, the character of Will Mondrich (Martins Imhangbe), the duke’s close friend, is based on a famous 19th-century Black boxer, Bill Richmond.

Similarly, Dr. Greig said, many assume women of that period were universally resigned to subservience, but there is plenty of evidence that Regency-era women complained about and challenged their lack of agency. That ethos is channeled into the character of Eloise Bridgerton (Claudia Jessie), one of Daphne’s seven siblings, who rages at the lack of possibilities for her future.

The women of “Bridgerton” are given agency to a point. But they are largely constrained by a society that expects rich young ladies to learn little beyond the pianoforte and watercolor painting, and that values them only if they preserve their virginity until marriage. It’s no wonder that Daphne has accepted the fact that her life has been “reduced to a single moment” — her wedding day — and that her only ambition is to have children.

To Rhimes, turning Ms. Bridgerton into some sort of renegade feminist would not have made sense in the context of the time; instead, the show allows for strategic moments of liberation in certain specific contexts.

One of those contexts — importantly, for an adapted romance series — is sex.

The show is often teasing and coy on the topic, making light of the Bridgerton daughters’ total ignorance of “the marital act,” but it does veer into steamy intimacy and even outright bawdiness.

Dynevor, the actress who plays Daphne, thinks that the feminism in the show can be found in the parts where sex and lust is shot from the perspective of the woman, and her desire is the focus of the scene.

In one sequence set at a boxing match, Daphne stares at Simon from across the room, hypnotized as he rolls up his sleeves to expose his muscular arms. In another depicting Daphne’s sexual awakening, Simon disrobes as she watches from the bed. She gasps in response.

“I’m so used to seeing that the other way around,” Dynevor, 25, said. “I’m used to seeing the woman drop her clothes for the man who is lying back in bed.” The sex scenes were shot with the help of an intimacy coordinator, she added, who assisted in choreographing every movement so that the scenes felt like stunts.

Whether it’s through discovering her sexuality, weighing in on her family’s choice for her future husband or wearing a half corset instead of a full one, Daphne Bridgerton is a heroine who is just about as feminist as Regency England will permit.

Rhimes, of course, is allowed to take as much control as she likes in this new chapter of her career. With “Bridgerton,” she said she read every script, watched every cut, discussed the various story lines and gave notes. But ultimately, she put her trust in Van Dusen’s vision for the debut show of what she likes to call “Shondaland 2.0.”

“The best part about it,” Rhimes said, “is that I’m getting a chance to just stand and look around and enjoy the view.”

A Scoop About the Pentagon Papers, 50 Years Later