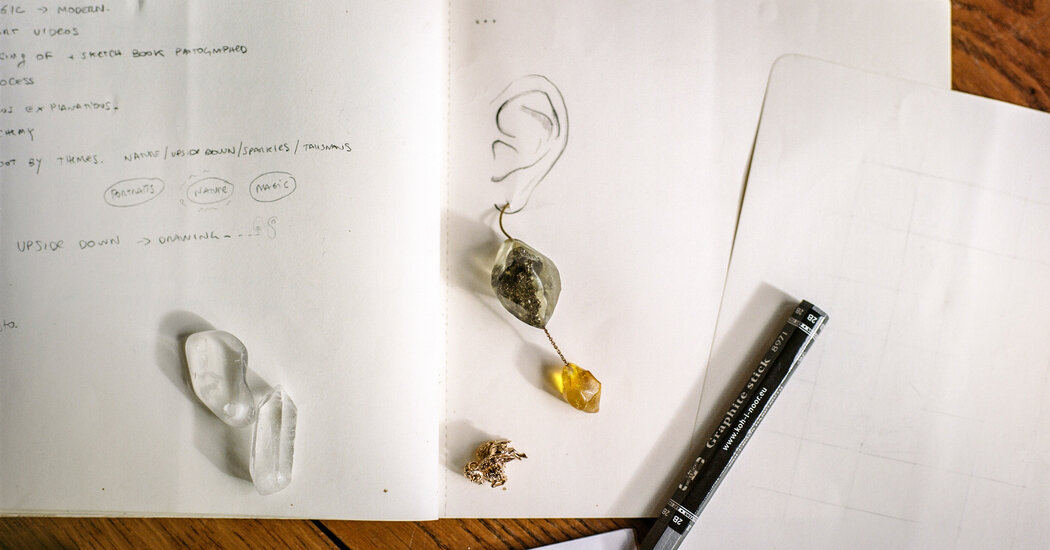 When the jewelry designer Marco Panconesi was growing up in Italy in the 1990s, he spent his summers traveling through Europe with his family in a customized ’80s-era caravan built by his grandfather. “It was always an adventure full of discovery,” he recalls. “I loved seeing all the temples and ruins and opening myself to see beauty in different places, histories and crafts.”

This appreciation for disparate cultures and eras has stayed with him and is now evident in the 700-square-foot, one-bedroom apartment in Paris’s Third Arrondissement that Panconesi, 31, shares with his boyfriend, the British choreographer Jordan Robson, 26. Panconesi moved into the space, located on the third floor of a stately Haussmannian building, two years ago, taking over the lease from a former colleague at Balenciaga, where he worked as an accessories designer from 2014 to 2018. Since then, Panconesi has slowly filled his and Robson’s home — treating its white walls and herringbone wood floors as a blank canvas — with an idiosyncratic array of objects that inspire his work as a jewelry designer for brands including Fendi, Peter Pilotto and Fenty, and for his own namesake line, which he founded last year. He takes a magpie approach to decorating, he says, because “I like my home to feel like a projection of my brain.”

In the dining room, a yellow-and-green resin vase by Gaetano Pesce and a set of black-walnut-and-leather Carlo Scarpa dining chairs demonstrate Panconesi’s reverence for Italian design by celebrated talents. But his more playful side comes through in the way he mixes these pieces with objects of more diverse provenances: a pair of matching peacock-shaped ceramic lamps he discovered at the Clignancourt flea market, an antique ceramic Chinese wine jar and two giant wooden wall hangings depicting a mythical sea creature that he bought while on a trip to Sri Lanka. The walls are also decorated, in part, with art and design given to him by friends and family — in the living room, a wooden family crest of indeterminate age inherited from his grandfather hangs next to a print by the London-based photographer Lea Colombo, one of the designer’s frequent collaborators. Other pieces he made himself, including the elegant fumed glass-topped dining table with a base carved from lacquered mahogany.

The light streaming into the room from a pair of towering double-height windows illuminates a collection of organic, roughly hewn quartz, amethyst and tourmaline stones, as well as Swarovski crystals in brilliant hues of turquoise, orange and electric blue, adorning the sill. Sparkling in the midday sun, they, along with potted peyote cacti, ficuses, birds of paradise and iron begonia plants, give the apartment the hushed, dreamlike feel of a private sanctuary, despite its setting on a busy Parisian street. “I’ve always been curious about rocks and stones, and collect them wherever I go,” explains Panconesi. “To me, they are alive and of another world.” It’s here, seated at the dining table and surrounded by the crystals and greenery, that he can be found most mornings, sketching designs and playing with prototypes for his collections.

Image Notes and a prototype for a new earring using found stones.Credit…Sabine Mirlesse

Panconesi was raised in Florence, where his schoolteacher father immersed him in the city’s art and architecture. “It was almost like living in a museum,” he says. He was drawn to classics in high school, and went on to study historical restoration at the Opificio delle Pietre Dure before switching to a course in ready-to-wear at the Polimoda fashion college in Tuscany upon realizing he “didn’t want to be stuck in some laboratory working in the dark.” After graduating in 2011, he moved to Paris to join Givenchy, under Riccardo Tisci, as an accessories designer, and later took on a role at Balenciaga before going freelance. Earlier this year, he was appointed design director at the storied crystal company Swarovski, and his first collection for the brand is due out next year.

But it’s his own label — which he runs with a team of four, shuttling between a studio in the 10th Arrondissement and the ateliers he works with in Tuscany — that is drawing the most attention. “I was consulting a lot for other brands, but I had ideas I wanted to save,” he says. “I needed to express my own voice.” His approach is both intuitive and cerebral, marrying a flare for experimentation with an architectural sensibility to create what he describes as “jewelry that transforms with time.” In his hands, a simple gold-plated hoop earring is engineered so that it may be turned upside down and worn as an ear cuff. His globe-shaped sterling silver Riviera earrings, meanwhile, can be unfolded like accordions into a series of long enameled chandeliers. Another signature are his Hybrid stones — gems, such as snowflake obsidian, honey jade and green aventurine, that are cut into a teardrop shape and then partially coated in vibrantly colored, hyper-glossy enamel, which creates the impression that they’re dipped in hot pink paint or molten lava.

Much like Panconesi’s home, his work is an ever-changing collage of ancient and contemporary, homegrown and far-flung influences. In March, he and Robson went on a vacation to Marrakesh that unexpectedly turned into a three-month-long visit when the French borders closed on account of the pandemic. While staying there, at a friend’s riad, Panconesi found inspiration for his new pieces in what he calls Morocco’s balance of “chaos and calmness,” a contrast perhaps best embodied in his Alchemy choker, a creeping vine of semiprecious stones that delicately wraps around the neck in an evocation of desert flora.

When the couple finally returned to their home in June, they found that while their own plants, having been tended to by a friend, had flourished in their absence, the apartment as a whole had an abandoned look. And so, despite being tired from their journey, they immediately set about moving the furniture and rearranging the décor. “We wanted it to feel like a new house, a new beginning,” say the designer. “I like things when they are not static, when they come alive and change. That’s my idea of beauty: when something transforms and evolves.”