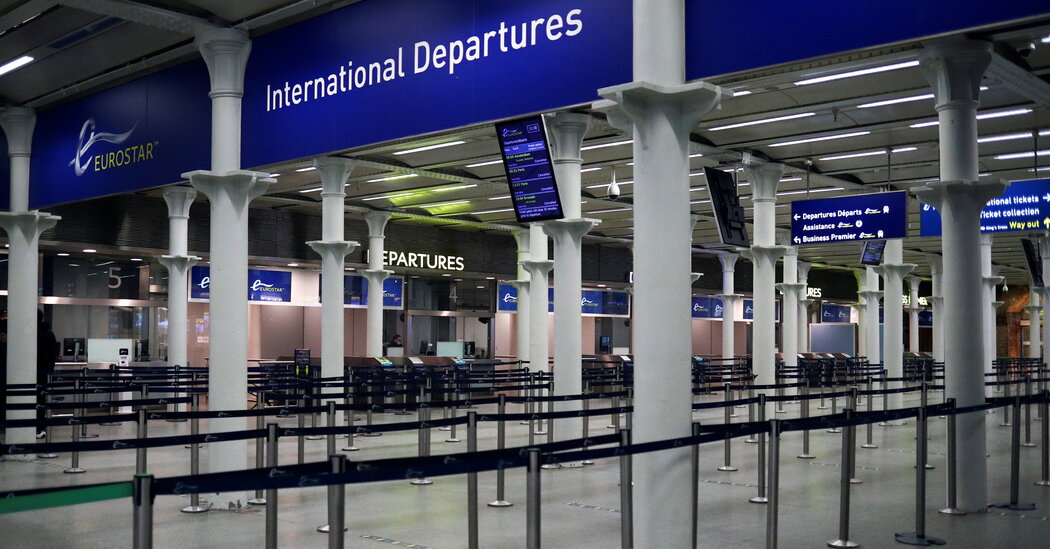 Some 40 countries imposed travel restrictions — trains and flights were canceled, and freight deliveries were halted at French ports — as Britain’s neighbors tried desperately to stop a fast-spreading variant of the coronavirus from leaping across the English Channel. Here’s what scientists know so far about the new variant.

Britons raged at the seesawing plans of their own government, which this past weekend reimposed a lockdown across much of the country’s southeast, including London. “I think the rest of the world looks at us and shakes their head,” said one Australian in Britain. “It’s not a very nice thought to be on a plague island, and that other countries don’t want you.”

All aboard? The pandemic has fueled a rail crisis across Europe — and the sleek and speedy Eurostar is no exception. More than 90 percent of its employees have been furloughed, its finances are threatened, and its ridership has all but vanished.

Reaction: News of the coronavirus variant jolted financial markets, sending the British pound tumbling against all the other major currencies. It declined as much as 1.8 percent against the dollar before recovering some ground.

Germany’s police force is much more sprawling and decentralized than the military, with less stringent oversight.Credit…Laetitia Vancon for The New York Times

Neo-Nazis have penetrated the ranks of German police departments, a two-year parliamentary inquiry found. Officers have formed far-right chat groups, and police computers have been used to send death threats.

Far-right extremism is resurgent in Germany, horrifying a country that prides itself on dealing honestly with chilling elements of its past. In recent months, dozens of officers and cadets have faced disciplinary measures for sharing racist images and playing down the Holocaust. Ammunition and Nazi memorabilia were found in raids of the homes of two officers.

Political repercussions: The far-right Alternative for Germany party, known by its German initials, AfD, has aggressively courted the police. Nearly 5 percent of the AfD’s 88 lawmakers in the federal Parliament are former police officers.

Quote: “We have a problem with far-right extremism,” the interior minister of Germany’s most populous state said. “If we don’t deal with it, it will grow.”

Related: A white supremacist who killed two people as he tried to storm a synagogue in Germany last year on the holiest day on the Jewish calendar was sentenced on Monday to life in prison.

Aleksei Navalny, the Russian opposition leader recovering from a nerve agent attack, published a recording of a phone call in which he says he tricked a security official into exposing a plot to poison him.

The video, uploaded to YouTube on Monday, purportedly shows Mr. Navalny calling a Russian intelligence officer who then confesses to planting poison on Mr. Navalny’s underpants.

Quote: “The priority was maximum secrecy so that no one could record it, no one saw anything they didn’t need to see, and so on,” the man can be heard telling Mr. Navalny over the phone.

Official response: In a statement, the Federal Security Bureau, Russia’s domestic intelligence agency, called Mr. Navalny’s video and related investigation a forgery and suggested that “international intelligence agencies” might have been involved.

If you have 7 minutes, this is worth it

The pandemic has forced China to confront the taboo subject of mental health, derided as a bourgeois delusion under Mao. Even today, discrimination persists, and many people with mental illnesses are shunned, hidden at home or confined to institutions.

But after the coronavirus crisis, that kind of neglect has become increasingly untenable. At the height of China’s outbreak, more than a third of people across the country experienced symptoms of depression, anxiety, insomnia or acute stress, a nationwide survey found. Our journalists looked at how the conversation around mental health is changing.

Migrant crisis: A mechanic from Romania and a truck driver from Northern Ireland, both members of an international people-smuggling gang, were convicted of manslaughter in the deaths of 39 Vietnamese migrants found in the back of a truck in England last year.

Energy use: Officials in China are scrambling to restrict electricity use this winter, as the country’s rapid economic recovery from the pandemic and unexpectedly frigid temperatures sent demand for power surging.

U.S. stimulus: After months of gridlock and debate, Congress approved $900 billion worth of coronavirus relief measures before a midnight deadline. The agreement is set to provide $600 stimulus payments to millions of American adults earning up to $75,000.

Snapshot: Above, the aurora borealis over the small hamlet of Kangos, Sweden. With his foreign assignments canceled for the year, a Swedish photographer is refocusing on his homeland — and finding plenty to admire in its wintry scenes.

European theater: The Times’s theater critics in London, Paris and Berlin reflect on a year of closings, reopenings, restrictions and curfews. The show somehow (mostly) went on.

Lives lived: More than 300,000 Americans died from the coronavirus this year. The Times asked five people to tell the story of someone they lost to the pandemic — not to dwell on their deaths, but to celebrate how they lived. Together, they form a portrait of America.

What we’re reading: This jaw-dropping feature, from Elle magazine, about the journalist who fell in love with the convicted fraudster Martin Shkreli. “This story has flattened me into a pancake,” writes Daniel Victor, a reporter for The Times. “I am now a pancake.”

Cook: Roasted salmon with lime, jalapeño and honey is a speedy weeknight meal with a kick.

Drink: Hosting a Zoom holiday party? Our wine critic has compiled a guide to finding the best Champagne to end a difficult year, from big houses to smaller growers.

Listen: Introduce a festive note with the Oratorio Society of New York’s stream of Handel’s “Messiah,” available free until Jan. 10.

Read, cook, watch, keep busy. Whatever it is, our At Home collection of ideas is here to help.

Scores of new words and phrases entered our lexicon this year, including medical jargon and social-media friendly shorthand. For the first time in years, the Oxford English Dictionary publisher declined to choose just one word for its Word of the Year. We’ve compiled some words and phrases that capture 2020.

Blursday. The passage of time became seemingly unreliable this year, as some days felt like a week, while some months flew by in an instant. The Washington Post even started a newsletter called “What Day Is It?”

Doomscrolling. The catchall, platform-agnostic term for consuming bad news or information that stresses you out — yet being unable to stop.

Virtual happy hour. The early weeks of lockdown, like the virus itself, were novel. As people searched for new ways to stay entertained and hold on to some semblance of normalcy from home, virtual happy hours became the event du jour. The wine — and quarantinis — flowed as heavily as the video-call invitations.

That’s it for this briefing. Have a good Tuesday.

Thank you
To Theodore Kim and Jahaan Singh for the break from the news. You can reach Natasha and the team at briefing@nytimes.com.

P.S.
• We’re listening to “The Daily.” Our latest episode is about one of America’s most trusted and popular radio hosts.
• Here’s today’s Mini Crossword puzzle, and a clue: Evil anagram of SANTA (five letters). You can find all our puzzles here.
• “Time” — a film from The Times about a mother striving to keep her family together while fighting for the release of her incarcerated husband — was named Best Non-Fiction Film by the New York Film Critics Circle.