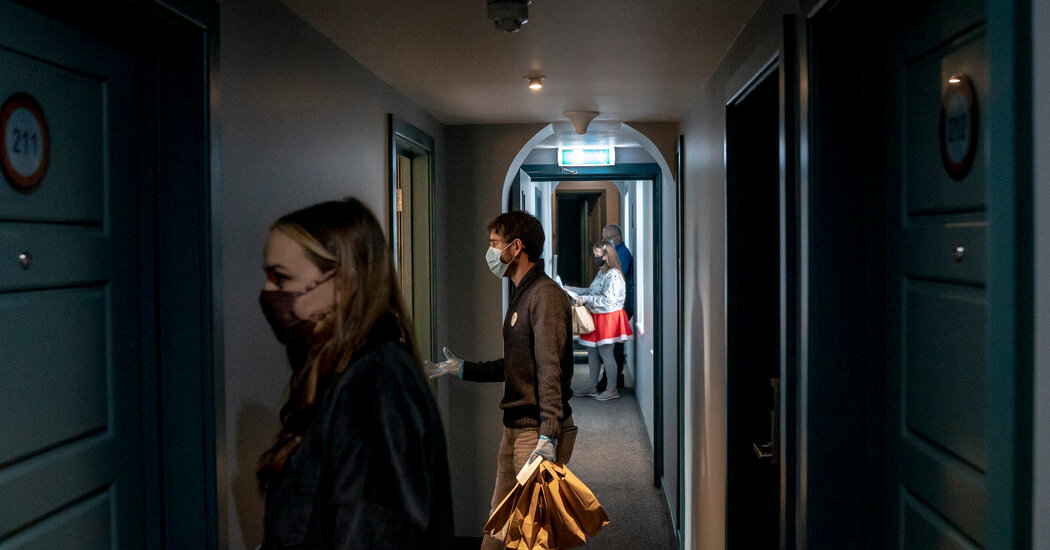 Many homeless people in London will stay in hotels over the Christmas and New Year holidays, if not longer, through funding from charities and the government.

Volunteers for Crisis at Christmas deliver breakfast to homeless people in their rooms in a London hotel that is housing so-called rough sleepers over the Christmas period.Credit…Andrew Testa for The New York Times

LONDON — There were a few places Roland Le felt comfortable sleeping in London: the doorway of shops he knew were closed and a wooded area near the city’s canal. Still, Mr. Le, who became homeless after he lost his job as a cleaner during the pandemic, never quite relaxed.

On Wednesday, Mr. Le found himself at ease and in a hotel room of his own, with a bathroom and three meals delivered a day, all courtesy of Crisis U.K., a charity funding the stay.

“I don’t need to watch over my shoulder all the time,” he said on a phone call from his room, adding that interacting with volunteers reminded him of his humanity. “It warms your heart up. They treat us as if we were like any other person.”

Thousands of people sleeping in Britain’s streets have found homes during the coronavirus pandemic, with the government offering 90 percent of them a place to stay, fulfilling a long held goal of charities to reduce rising levels of street homelessness. But whether that reprieve will last, charities say, will depend on how much more money the government will give and if it is spent to target systemic barriers to ending homelessness.

Image Much of London is confined indoors under harsh coronavirus restrictions.Credit…Andrew Testa for The New York Times

On Monday the government pledged another 310 million pounds, about $420 million, to local councils to help support those without homes.

In Newham, which has one of the worst rates of homelessness in the country, money is still available to house those offered temporary accommodations in the first wave of the virus, said Anneke Ziemen, lead outreach manager for the Thames Reach homeless charity.

But now, offers of housing have slowed down, she said, and there are other, more complex barriers to accessing welfare benefits and mental health services.

“It’s a Band-Aid,” she said. “We still have some people on the streets in the moment. We’re just hoping we can take that momentum forward and make some long-term changes.”

This month, with a fast-spreading variant of the coronavirus sweeping the nation, charities who usually offer communal temporary homes at churches and schools have stepped up their efforts, paying for accommodations like hotel rooms to help people avoid the virus.

Crisis U.K. has independently paid for about 500 rooms in four London hotels, and the City Hall of London said it had provided another 500. Combined with the efforts of other groups, it means many of the thousands of so-called rough sleepers in Greater London — about 3,400 according to a summer census — will spend the Christmas and New Year holidays, if not longer, under cover.

Roland Le said interacting with volunteers reminded him of his humanity. “It warms your heart up. They treat us as if we were like any other person.”Credit…Andrew Testa for The New York Times

Tighter restrictions spurred by the new variant of the coronavirus have made it even more urgent to get people inside, said Steve Douglas, chief executive of St. Mungo’s, another charity that has supported over 3,000 people sleeping on the streets since the pandemic began. “If you are rough sleeping on the streets and looking at 0 degree temperatures and the threat of Covid — it is difficult to see hope,” he said.

Aid workers and advocates said that even though there remained concerns about keeping people housed long-term, they see reason for some optimism.

“Clearly we’ve seen the government take action and the number of people experiencing homelessness has reduced because of that,” said Jon Sparkes, chief executive of Crisis U.K. “It certainly shows what can be achieved if there’s political will.”

At the hotels booked by Crisis U.K., guests can stay for two weeks and choose to self-isolate in their rooms if they wish and meals are delivered three times a day. They also have access to technology and virtual activities from yoga and fitness classes to sessions on living with drug and alcohol addiction and résumé writing.

Preparing breakfast packages in a London hotel housing the homeless.Credit…Andrew Testa for The New York Times

Mr. Sparkes said that during their stay, volunteers would work to help secure guests more permanent housing. “Some people will end up still rough-sleeping after Christmas but we will do absolutely everything we can to help avoid that,” he said.

For Paul Redford, 52, who was offered housing by Crisis U.K. during the first wave of the pandemic and has since moved to a studio funded by the government, accepting temporary accommodation helped him get his bearings. He is now working as a volunteer in the Crisis warehouse and applying for jobs.

Mr. Le said a nervous breakdown four years ago led him to move out of a shared apartment. He had been living in communal housing, working as a cleaner in Cardiff, Wales, when the coronavirus hit. “I just couldn’t keep it together mentally,” he said.

Since arriving at the hotel this week, Mr. Le said he has spent his time watching anime and science-fiction films on Netflix. He wants to write poetry and has asked for pencils to draw with. He has unpacked his clothes and other memorabilia, usually stuffed in one rucksack.

A hotel housing rough sleepers blocked access to a dining area by roping off tables and chairs.Credit…Andrew Testa for The New York Times

Mr. Le said previous organizations had tried to get him housed when he lived on the street, but he had refused out of pride. Age, however, had humbled him.

“I’m trying my best to be a better person each day,” he said.

For U.K., an Early Taste of Brexit as Borders Are Sealed