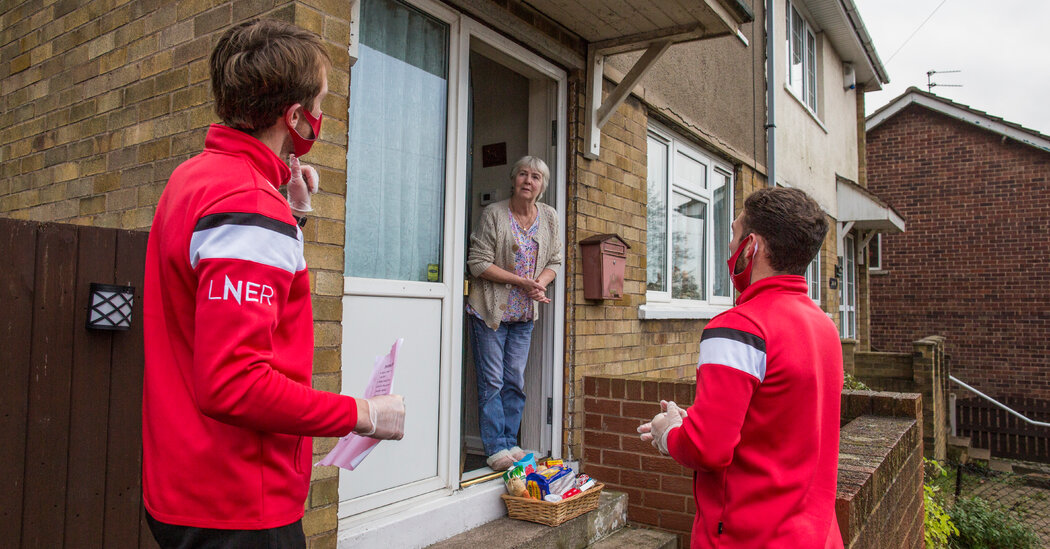 When the pandemic closed stadiums in Britain, soccer clubs sought out their most vulnerable supporters to make sure they were OK. Nine months later, they’re still at it.

The Doncaster Rovers players Tom Anderson, left, and Jon Taylor delivered a Christmas basket to a fan who has been quarantining with her husband since March.Credit…Elizabeth Dalziel for The New York Times

At the beginning of March, Roger Balsdon was all set. For months, he and his wife, Gloria, had been planning the journey from their home in Plymouth, along England’s south coast, to Southampton, where they would board a cruise ship for a trip to celebrate their 60th wedding anniversary.

It took only the blink of an eye, Balsdon says now, for his world, and the one around him, to go dark.

As the coronavirus spread, the Balsdons, wary of the risks of traveling during a pandemic, called off the trip. A few weeks later, Gloria died, unexpectedly, at age 76. Within days, a lockdown imposed to battle the pandemic left Roger Balsdon, 80, isolated in his home. He would stay there, alone, for the next 12 weeks.

Then one day his phone began to ring.

On the other end of the line was a woman named Emma Potter, who identified herself as being associated with the Argyle Community Trust, a charity linked to the local soccer team, Plymouth Argyle, which Balsdon had supported since he was a boy. Potter told Balsdon she had been given his contact information by his son. She just wanted to check in to see how Balsdon was coping, she said, and ask if there was anything she could do.

“I like to think that we are a community club,” Potter said. “We try to use that as our ethos and make people know that. We are more than a football club: We are a big family.”

Image The baskets contain food and other necessities, but also a sense of community.Credit…Elizabeth Dalziel for The New York Times

Almost as soon as the coronavirus descended on Britain nine months ago, shutting stadium doors and nearly everything else in cities and towns big and small, England’s professional soccer clubs — understanding their importance to people who rely on them for a weekly sense of routine, of community — sought out new ways to identify and interact with their most lonely and vulnerable fans.

At Bristol Rovers, Portsmouth and Exeter City, players made food deliveries and carried out community work. At Bournemouth, Watford and West Brom, they phoned vulnerable fans to check in on them. There have been cooking classes and Zoom quizzes; pen pal programs, exercise classes and watch parties. One club hired what it called a chief loneliness officer, and once he was on board, set him to work finding any fans it might have missed.

Surprises have been set up by chairmen and coaches. Players, past and present, have dropped by homes for unannounced visits. Some fans were given iPads to watch matches or to call their families, and instructions on how to operate them. Others had their prescriptions delivered by club employees.

Even today, as the pandemic rolls on, so do the community efforts. This month, Doncaster Rovers players spent a day delivering Christmas gift baskets to the doorsteps of dozens of fans still unable to go out.

“It’s the softer side” of soccer, said Simon Hallett, the Plymouth Argyle chairman, who has made dozens of calls to fans the Trust had identified as being vulnerable or lonely. “Make them feel they are not alone. Show them that there is somebody who cares about them.

“It helps when it’s a football club, because football is a way of bringing people together.”

Shirley Waring, the community officer for Tranmere Rovers, on one of her hundreds of so-called friending phone calls.Credit…Tranmere Rovers

Many efforts have been collaborative ones between soccer clubs and their nonprofit arms. These foundations, or trusts, are often registered as separate organizations, but they still share an association and resources (facilities, names, email addresses, phone numbers) with the teams. In an era when fans may put more trust in their local soccer club than in their national government, those relationships — and a hyperlocal sense of trust and responsibility — have been crucial.

“Our football clubs have been here longer than the National Health Service,” said Adrian Bradley, the Head of Health and Wellbeing at the English Football League Trust, which oversees soccer clubs’ charitable entities across several tiers of the English league structure. “They’ve been here longer than many local hospitals. They’ve existed in many communities since the Victorian Era and are a trusted part of the community and the social fabric of life in these places.”

Potter’s initial call to Balsdon this spring felt like a “ray of sunshine,” he said, and over the weeks and months that followed, she would call or visit him a couple of times a week. With the help of the soccer club, the Argyle Community Trust also set up calls with a first-team coach, Kevin Nancekivell, with whom Balsdon would discuss the team’s performances.

The effort — part community work, part mental health outreach — is emblematic of a broader collective awareness across Britain of loneliness within the population. The problem is particularly acute among adult males and seniors, experts said, but the discussion around it has increased in recent years — helped by efforts to reduce the stigma attached to talking about mental health, as well as a series of documentaries and television campaigns that have put faces to the issue.

Doncaster goalkeeper Joe Lumley took part in the team’s check-in program, which was created to keep vulnerable fans in touch with the club during the pandemic.Credit…Elizabeth Dalziel for The New York Times

The pandemic has only amplified such anxieties. One study released in June by the Office for National Statistics in Britain found that 2.6 million adults reported they felt lonely “often” or “always,” while 7.4 million adults said they had felt lonely in the past seven days.

For Keith Curle, the manager of Northampton Town, tackling the issue meant collecting the phone numbers of potentially vulnerable fans when the lockdown first began, and calling two or three supporters a day into early summer.

Since March, the E.F.L. Trust said, English Football League clubs and their staff members have delivered more than 643,000 food parcels to vulnerable members of their communities, as well as 29,000 personal protective equipment items and more than 5,200 prescriptions. Nearly a quarter-million phone calls to and from community members needing support have been logged by E.F.L. Trust teams, in addition to the countless letters. Those figures do not include the work of the Premier League, whose teams have undertaken their own loneliness initiatives.

It is the personal touches, though, that have mattered most to those involved. At Northampton Town, a share of a government grant yielded the hiring of the club’s loneliness officer, Bob Allen, who immediately headed to the club’s database of around 6,000 fans and began calling anyone over age 70.

Through such “befriending” calls, Allen struck up a conversation with Michael Bull, 88, who has followed the Cobblers, as the third-tier Northampton Town team is known, since he was a teenager. The outreach to Bull had been suggested by someone who used to recognize him from his visits to the club’s shop.

Bull explained that he had spent more than two decades caring for his wife, Pamela, who had dementia, before she was moved into a full-time care facility about three years ago.

Even before that, though, soccer provided a sense of regular companionship, Bull told Allen. Standing in the West Stand with a pocket full of mints on a cold winter afternoon, he could lean on his usual barrier and strike up a conversation with the handful of regulars around him.

But in April, with the club’s Sixfields Stadium closed to fans and many of Britain’s seniors sheltering in their homes, Bull said he received the first of a series of phone updates from Pamela’s care home — first to let him know that his wife of 66 years was ill, and then to inform him that she had died from causes linked to her dementia. By the time Pamela died, Bull said, he had not seen her in two and a half months.

The summer passed before Allen joined the club and reached out. “It’s nice to think somebody has still got a bit of concern,” Bull said.

Over recent months, Bull has become one of around 70 vulnerable fans Northampton checks in on. He and Allen have been working together to plan a series of walks, which will allow older fans to gather and chat about the club, or anything else. Allen also arranged for Bull to have his photo taken with the club’s most recent trophy, and had him selected as one of the team’s virtual mascots for a recent game.

Football League clubs like Doncaster said they had distributed hundreds of thousands of food parcels and delivered more than 5,200 prescriptions during their check-ins with season-ticket holders.Credit…Elizabeth Dalziel for The New York Times

Similar gestures have lifted the spirits of Balsdon down in Plymouth, too.

On October, having rarely left his house in more than six months, Balsdon was invited by the Argyle Community Trust to attend a coffee morning that was being hosted for fans. There, he chatted about all things Argyle, the team Balsdon first watched more than seven decades ago, when his seat was the spot atop a high fence where his father and uncle would place the 5-year-old Balsdon so he could make out the field over the thousands of taller fans below. “It got me up and about and thinking differently about the world,” he said.

Under Britain’s current coronavirus guidelines, Plymouth finds itself in Tier 2 — meaning up to 2,000 fans can now attend Plymouth Argyle games at the team’s stadium, Home Park. Potter and her staff recently selected Balsdon to be one of a handful of members in the loneliness initiative to be awarded the coveted tickets to one of them.

As a season-ticket holder, Balsdon hopes that he and his friend Gordon Bennett, whom he met working at the local dockyard, will be able to resume their regular attendance soon. They have watched Argyle games together at Home Park for more than 40 years.

“There’s that social contact,” Balsdon said. “We see the same game, but we never see the same situations. We can talk about it all week.”

Why Could Boris Johnson Marry in a Catholic Church?

Building a Mosque in France, Never Easy, May Get Even Harder

With cyberattacks increasing, Biden said he would press Putin for a halt.