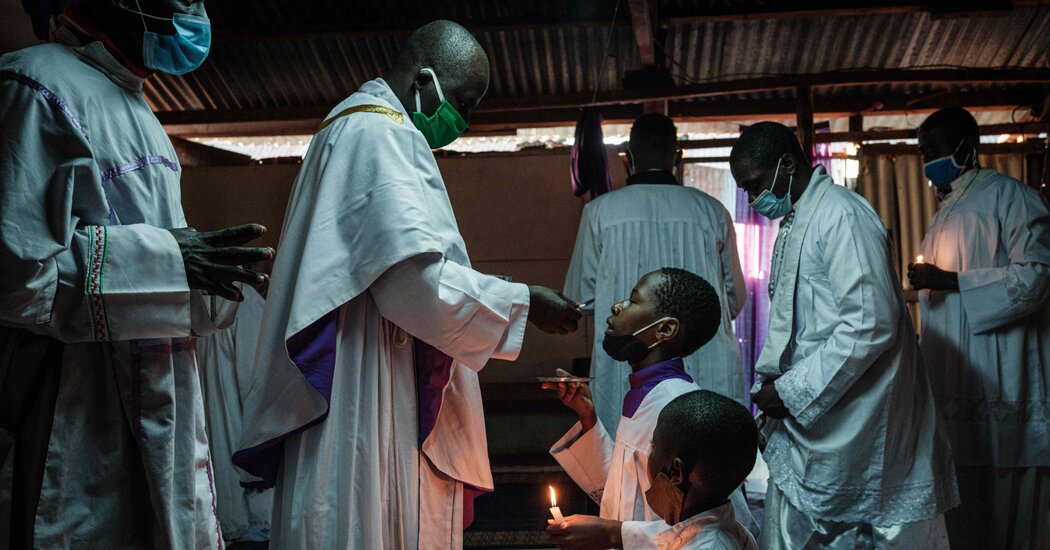 Despite the pandemic, Christmas traditions endure, shedding some brightness in a gloomy season.

Christmas falls on one of the darkest days of the year, coming soon after winter solstice. This year, it also came during a dark time for humanity amid a worldwide viral pandemic.

“Here we are, celebrating Christmas, yet deprived of the greetings, hugs, kisses and handshakes that normally fill this day,” Cardinal Vincent Nichols, the archbishop of Westminster, said during a midnight Mass in a nearly empty Westminster Cathedral in London. “In the darkness of this pandemic, so many of our comfortable assumptions are being shaken.”

Yet the ceremonies went on, often broadcast on television or, as with the Westminster Mass, streamed online. If the pandemic has deprived worshipers of community on the holiest day of the Christian calendar, these lonely acts of faith may have shed a bit of light in the darkness.

At the cathedral of Notre-Dame in Paris, which was nearly destroyed by fire last year, the annual Christmas Eve choral concert took place, without an audience and with the medieval edifice still under reconstruction. The choir, organist and cellist, socially distanced, wore hard hats and protective coveralls.

At St. Reinold’s Church in Dortmund, Germany, the organist Gerd von der Heyde poured out his heart to the building’s 13th-century stone walls.

At the Yoido Full Gospel Church in Seoul, South Korea, the minister preached to empty pews and an online congregation.

At the Church of the Nativity in Bethlehem, on the spot where Christian tradition holds that Jesus was born, midnight Mass is usually the social event of the year. This year, it was limited to a few church officials, diplomats and Bethlehem’s mayor.

Tens of thousands of Roman Catholics usually pack St. Peter’s Square in the Vatican for the pope’s annual Christmas address. This year, with Italy under lockdown, the square was closed. Pope Francis, speaking from a lectern inside the Apostolic Palace, said that the pandemic should compel people to reflect on their common humanity, and that understanding should guide how vaccines are distributed.

“I beg everyone, heads of state, companies and international organizations, to promote cooperation and not competition, to find a solution for everyone, vaccines for all, especially for the most vulnerable and needy in all areas of the planet,” he said.

While the pandemic has created untold hardship for millions this year, it has also in many places brought out the best in people.

“Have we not seen these months of difficulty marked by countless acts of random kindness, quiet heroism, selfless service, remarkable community efforts, all directed towards those most in need?” Cardinal Nichols asked in his sermon at Westminster.

Such acts, he said, had “penetrated the darkness.”

Image Outside St. Antuan Church in Istanbul on Christmas Eve.Credit…Sedat Suna/EPA, via Shutterstock The Ramoneda family gathering for a Christmas meal in Barcelona.Credit…Emilio Morenatti/Associated Press An online Christmas service from the Yoido Full Gospel Church in Seoul, South Korea.Credit…Jeon Heon-Kyun/EPA, via Shutterstock Archbishop Pierbattista Pizzaballa leading a midnight Mass at the Church of the Nativity in Bethlehem.Credit…Pool photo by Abed Al Hashlamoun The Wangfujing Church in Beijing. Churches in the city cancelled Christmas services because of the pandemic.Credit…Ng Han Guan/Associated Press Nuns walking through a deserted St. Peter’s Square on Christmas, a day after a nationwide lockdown took effect.Credit…Yara Nardi/Reuters Services at the Immanuel Church in Jakarta, Indonesia.Credit…Ulet Ifansasti/Getty Images Leaving a Christmas service in Gauhati, India.Credit…Anupam Nath/Associated Press The musician Gerd von der Heyde at St. Reinold’s Church in Dortmund, GermanyCredit…Ina Fassbender/Agence France-Presse — Getty ImagesContinue reading the main story

New cell profiling method could speed TB drug discovery: Technology combines rapid imaging and machine learning to uncover patterns in how antibacterials kill; can be applied to many pathogens