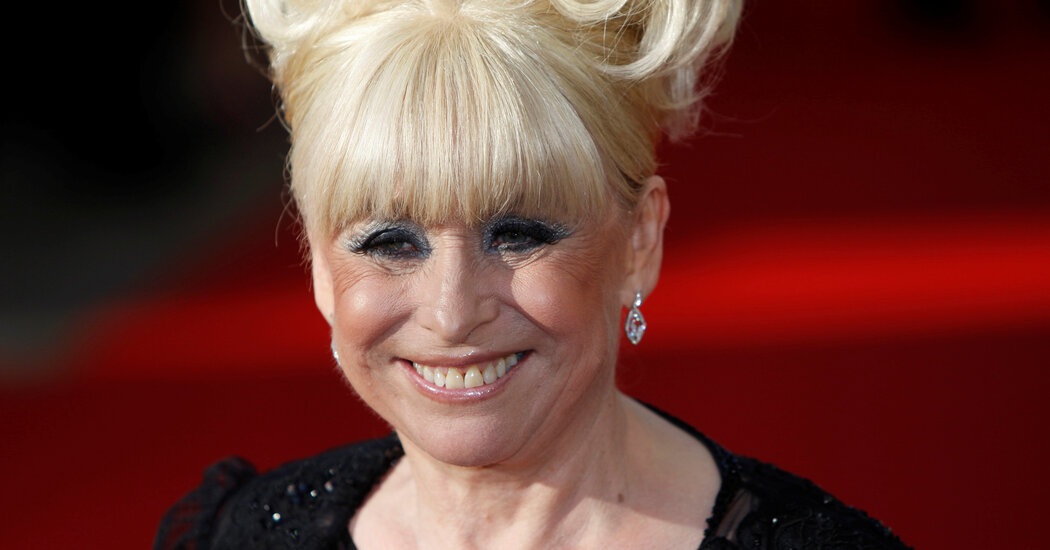 She went from bubbly sex symbol in the “Carry On” films to working-class hero on “EastEnders.” Her private life was often as troubled as her “EastEnders” character’s.

The actress Barbara Windsor at the British Academy Television Awards in London in 2009. She was a star of the series “EastEnders” on and off from 1994 to 2016.Credit…Luke Macgregor/Reuters

LONDON — Barbara Windsor, a star of the “Carry On” films and the long-running BBC soap opera “EastEnders,” whose dirty staccato laugh and ability to embody working-class life seared her into Britain’s collective memory, died on Dec. 10 at a care home here. She was 83.

Her death was announced in a statement by Scott Mitchell, her husband and only immediate survivor, who said the cause was Alzheimer’s disease.

Image Ms. Windsor with Prime Minister Boris Johnson last year in London. Mr. Johnson wrote on Twitter that Ms. Windsor had “cheered the world up with her own British brand of harmless sauciness and innocent scandal.”Credit…Pool photo by Simon Dawson

In a sign of the impact Ms. Windsor had on Britain’s cultural life over the last six decades, members of the royal family were among those who paid tribute on social media, as was Prime Minister Boris Johnson, who wrote on Twitter that Ms. Windsor “cheered the world up with her own British brand of harmless sauciness and innocent scandal.”

Ms. Windsor also had an impact in the United States, albeit briefly, when she appeared on Broadway in 1964 in “Oh! What a Lovely War,” Joan Littlewood’s music-hall-style show that used irreverent songs from World War I to mock the absurdity of conflict.

Some American theatergoers might have found Ms. Windsor’s cockney accent hard to understand — one of her first movies, “Sparrows Can’t Sing,” played with subtitles at some screenings in New York — but she was nominated for a Tony Award for best featured actress in a musical.

In 1970, she told a BBC interviewer that she really wanted to make a film in Hollywood, preferably a comedy with Jack Lemmon. “That’d be smashing, wouldn’t it?” she said. She didn’t achieve that particular ambition, but she was soon immortalized in British movie theaters thanks to her roles in the farcical, innuendo-laden — and hugely successful — “Carry On” movies.

Later, she became even more well known for her role as the matriarchal pub landlady Peggy Mitchell on “EastEnders,” a character she portrayed on and off from 1994 to 2016. She stopped once her Alzheimer’s made it impossible to continue.

Ms. Windsor with her “EastEnders” co-stars in 1999, during the filming of an episode that included the wedding of her character, Peggy Mitchell.Credit…John Stillwell/PA, via Associated Press

Ms. Windsor was born Barbara Ann Deeks on Aug. 6, 1937, in Shoreditch, then a working-class part of East London. Her father, John, a bus driver, and her mother, Rose, a dressmaker, had a tumultuous marriage, and at 15 Ms. Windsor was made to testify about their rows at a divorce hearing.

As a child in World War II, she was evacuated to Blackpool, a seaside resort in northern England. There, she revealed in her 2001 autobiography, “All of Me: My Extraordinary Life,” she first stayed with a family that tried to abuse her sexually, before moving in with a friend whose mother sent them both to dance lessons. The mother was so impressed by her talent that she wrote a letter to Ms. Windsor’s parents begging them to let her take lessons in London. “She’s a proper show-off,” the letter said, Ms. Windsor recalled in the 1970 BBC interview.

Back in London, Ms. Windsor was spotted by a talent agent who tried to cast her in a pantomime, the peculiarly British form of theater popular at Christmas, but her school refused to give her time off. She eventually left to go to acting school, where the teachers repeatedly tried — and failed — to get her to lose her accent.

Ms. Windsor became celebrated for her bawdy roles in the “Carry On” comedy movies. She is seen here with Sid James, as King Henry VIII, in a scene from “Carry On Henry” (1971).Credit…Bob Dear/Associated Press

For all the promise Ms. Windsor showed, her break didn’t come until 1960, when she traveled to East London to audition for a role with Ms. Littlewood’s Theater Workshop, a company whose works often brought working-class life and humor onstage. The acclaim she got for her work there soon led to appearances on TV and then in film, where she became celebrated for her bawdy roles in the “Carry On” comedies.

In those films, the camera often focused on the short (4-foot-11) but buxom Ms. Windsor’s figure. She is probably best remembered for a scene in “Carry On Camping” (1969) in which her bikini top flies off during an outdoor aerobics class (during filming an assistant pulled the top off using a fishing line). That clip has been shown numerous times on British television ever since.

Ms. Windsor in 1980 with Ronnie Knight, her first husband, who had just been released on bail after more than two weeks in custody. He was accused (and later acquitted) of ordering a hit man to murder his brother’s killer.Credit…Associated Press

Although Ms. Windsor found success onscreen, her private life was troubled. She had liaisons with a series of famous men, including the soccer player George Best and the East London gangsters Reggie and Charlie Kray. In 1964 she married Ronnie Knight, another gangster, who in 1980 was tried for ordering a hit man to murder his brother’s killer (he was acquitted), and in 1983 was involved in stealing six million pounds (more than 17 million pounds, or about $23 million, in today’s money) from a security depot and fled to Spain.

Her relationship with Mr. Knight caused her to have a nervous breakdown, she told the BBC in the 1990 interview. That marriage and a subsequent one ended in divorce.

Her life got back on track on the 1990s after she was cast as Peggy Mitchell on “EastEnders,” the wildly popular kitchen-sink soap opera whose story lines often reflected social issues.

She quickly became one of the show’s stars, known for slapping her co-stars when the plot demanded a climactic moment and for story lines that could be far darker than anything one would find in a “Carry On” movie. (In 2010, one of her character’s sons burned down the pub in the middle of a crack cocaine binge.)

In the 1990s, her character had breast cancer twice and underwent a mastectomy, a plot that led hundreds of viewers to write to the BBC to express gratitude for how sensitively she handled the subject. In 2016, in her final appearance on the show, her character killed herself because her cancer had returned.

That same year, she was named a dame commander of the Order of the British Empire.

Whatever happened to Ms. Windsor, onscreen or off, she never lost the joy of performing.

“I don’t think negatively,” she told the BBC in 1990 when asked how she would look back on her life. “I’ll pick out all those wonderful things that have happened, and how lucky that I got paid — paid! — for doing something that I absolutely adored.”

The Place Hit Hardest by the Virus

What’s on TV This Week: ‘In Treatment’ and ‘Inside the Met’