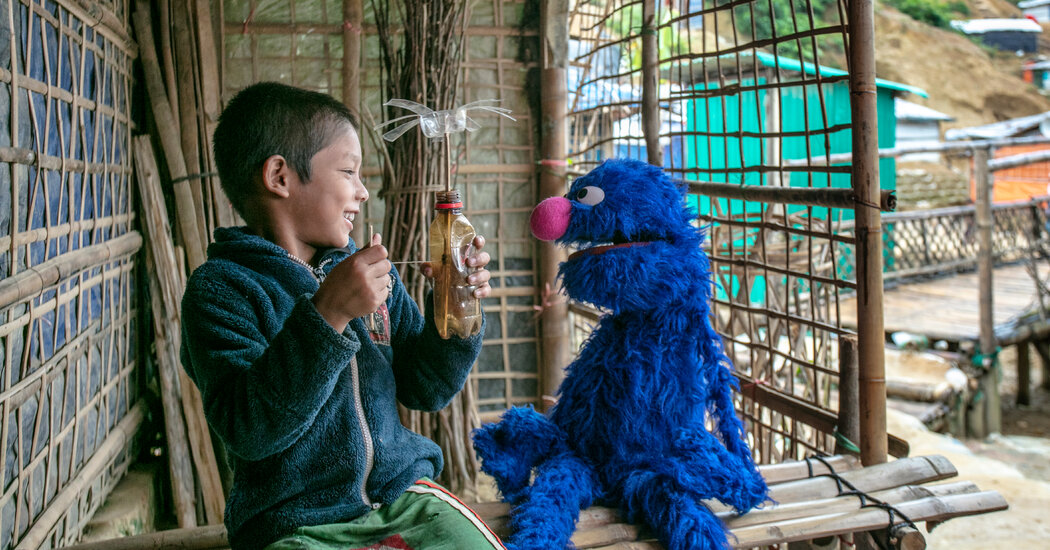 Noor and Aziz are Rohingya Muppets who will feature in educational programming that will be shown in refugee camps.

A child in a Rohingya refugee camp in Cox’s Bazar in Bangladesh with Grover the Muppet in 2018.Credit…Ryan Donnell/Sesame Workshop

BANGKOK — Six-year-old twins Noor and Aziz live in the largest refugee camp in the world. They are Rohingya Muslims who escaped ethnic cleansing in their native Myanmar for refuge in neighboring Bangladesh. They are also Muppets.

On Thursday, Sesame Workshop, the nonprofit that runs the early education TV show “Sesame Street” and operates in more than 150 countries, unveiled Aziz and Noor as the latest Muppets in their cast of characters.

The twins will appear with Elmo and other famous Muppets in educational programming about math, science, health and other topics that will be shown in the camps.

They will speak Rohingya, the language of a group of people that the Myanmar authorities have refused to recognize as a legitimate ethnicity. Sesame Workshop has created a new curriculum in Rohingya in partnership with the Lego Foundation, the International Rescue Committee and BRAC, a Bangladesh-founded charity.

“They are among the most marginalized children on earth,” said Sherrie Westin, the president of social impact for Sesame Workshop, who traveled to the Rohingya refugee camps several times to help formulate the Muppet twins’ characters and story lines. “For most Rohingya children, this will be the very first time that characters in media have looked like them, have sounded like them, and really reflect their rich culture.”

More than half the residents of the Rohingya refugee settlements in Bangladesh are children. Many suffered trauma after security forces in Myanmar forced them out of their villages, murdering some of their fathers and raping their mothers.

A survey by Doctors Without Borders, released in the wake of a brutal campaign in 2017 that compelled more than 750,000 Rohingya to flee the country in the span of a few months, found that at least 730 children below the age of five were killed from late August to late September of that year.

The legacy of violence lingers in Bangladesh and has been incorporated into the Muppets’ histories. Noor, one of the Muppet twins, is scared of loud noises, just as many Rohingya children are today, as gunfire resounds in their memories.

Sesame Workshop has long sought to champion diversity and social justice. Muppets and their young playmates on Sesame Street have had autism, H.I.V. and Down syndrome. They have been homeless and struggled with the stigma of having an incarcerated parent. An Afghan Muppet exemplified the importance of educating girls.

Image The muppets Noor and Aziz are Rohingya Muslim and new characters in the Sesame Street cast. Credit…Sesame Workshop

Noor and Aziz, as conceptualized by Sesame Workshop, are playful and get along well. Aziz, a boy, helps the family with household chores and is steeped in the Rohingya tradition of storytelling. Noor, a girl, is confident and loves learning. The programming chose to depict them specifically as twins so that they would able to play together as a girl and a boy in a way other siblings in this traditional Muslim community might not be able to as easily.

“By modeling girls and boys being equal, by having characters that love to learn, it is important that we’re not only inspiring young girls, giving them a sense of possibility that they may not have had, but that we’re showing little boys that girls can have equal roles and responsibilities,” Ms. Westin said.

The programming depicts the Rohingya Muppets as living in a vast warren of tent shelters where more than a million mostly stateless people have been crammed with little hope of returning to Myanmar. United Nations officials have suggested that their exodus bears the hallmarks of genocide.

Life in the Rohingya refugee camps can be far harsher than what Noor and Aziz’s back stories suggest. Girls, who are often kept from school, tend to get married before they reach adulthood to ease the financial burden on their families. This year, hundreds of Rohingya girls spent months at sea in overloaded fishing vessels trying to get to Malaysia, where they had been promised as child brides to Rohingya men laboring as undocumented workers. Dozens died during the journey.

On Friday, in Kutupalong, the biggest of the Rohingya refugee camps in Bangladesh, Ajmat Ara, 8, shook her head when asked whether she knew of a furry collection of characters called the Muppets. Unlike many girls, she is lucky and goes to a school run by an educational charity.

“We’re learning English and Burmese in school,” she said, before running off to play.

Kentucky Is Hurting as Its Senators Limit or Oppose Federal Aid

The Imperial Editor Goes the Way of the Dodo