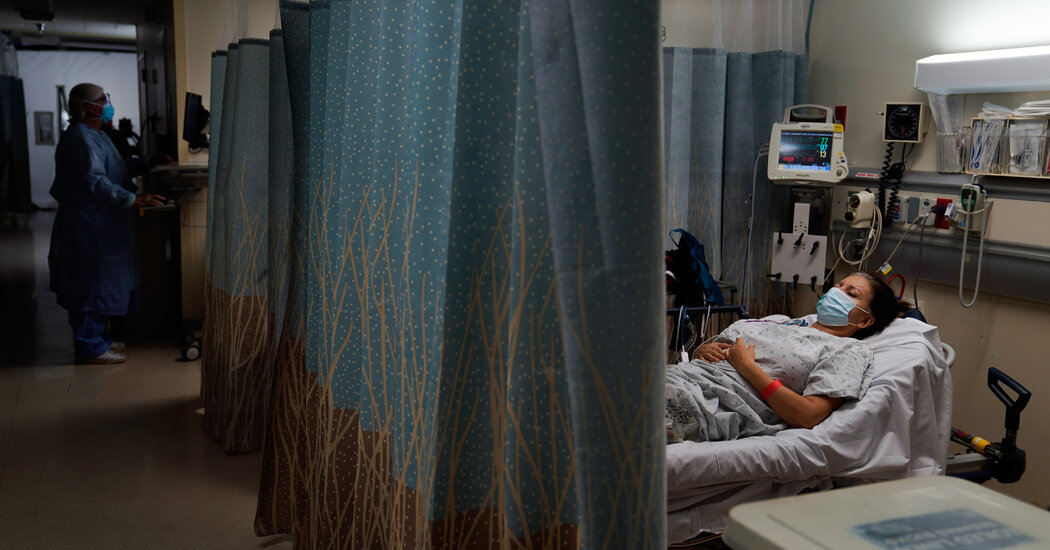 Knowing the amount of virus carried in the body could help doctors predict the course of a patient’s illness.

A patient in the emergency room of a hospital in Los Angeles awaited the results of a coronavirus test this month.Credit…Jae C. Hong/Associated Press

As Covid-19 patients flood into hospitals nationwide, doctors are facing an impossible question. Which patients in the E.R. are more likely to deteriorate quickly, and which are most likely to fight off the virus and to recover?

As it turns out, there may be a way to help distinguish these two groups, although it is not yet widely employed. Dozens of research papers published over the past few months found that people whose bodies were teeming with the coronavirus more often became seriously ill and more likely to die, compared with those who carried much less virus and were more likely to emerge relatively unscathed.

The results suggest that knowing the so-called viral load — the amount of virus in the body — could help doctors predict a patient’s course, distinguishing those who may need an oxygen check just once a day, for example, from those who need to be monitored more closely, said Dr. Daniel Griffin, an infectious disease physician at Columbia University in New York.

Tracking viral loads “can actually help us stratify risk,” Dr. Griffin said. The idea is not new: Managing viral load has long formed the basis of care for people with H.I.V., for example, and for tamping down transmission of that virus.

Little effort has been made to track viral loads in Covid-19 patients. This month, however, the Food and Drug Administration said clinical labs might report not just whether a person was infected with the coronavirus, but an estimate of how much virus was carried in their body.

This is not a change in policy — labs could have reported this information all along, according to two senior F.D.A. officials who spoke on the condition of anonymity because they were not authorized to speak publicly about the matter.

Still, the news came as a welcome surprise to some experts, who have for months pushed labs to record this information.

“This is a very important move by the F.D.A.,” said Dr. Michael Mina, an epidemiologist at the Harvard T.H. Chan School of Public Health. “I think it’s a step in the right direction to making the most use of one of the only pieces of data we have for many positive individuals.”

The F.D.A.’s change followed a similar move by the Florida Department of Health, which now requires all labs to report this information.

The omission of viral load from test results was a missed opportunity not just to optimize strained clinical resources, but also to better understand Covid-19, experts said. Analyzing the viral load soon after exposure, for example, could help reveal whether people who die from Covid-19 are more likely to have high viral loads at the start of their illnesses.

And a study published in June showed that the viral load decreases as the immune response surges, “just like you’d expect it to be for any old virus,” said Dr. Alexander Greninger, a virologist at the University of Washington in Seattle, who led the study.

An uptick in the average viral load throughout entire communities could indicate an epidemic on the rise. “We can get an idea of whether the epidemic is growing or declining, without relying on case counts,” said James Hay, a postdoctoral researcher in Dr. Mina’s lab.

Fortunately, data on viral load — or at least a rough approximation of it — is readily available, built into results from the P.C.R. tests that most labs use to diagnose a coronavirus infection.

A P.C.R. test is performed in “cycles,” each doubling the amount of viral genetic material originally drawn from the patient’s sample. The higher the initial viral load, the fewer cycles the test needs to find genetic material and produce a signal.

A positive result at a low cycle threshold, or Ct, implies a high viral load in the patient. If the test is not positive until many cycles have been completed, the patient probably has a lower viral load.

Researchers at Weill Cornell Medicine in New York recorded viral loads among more than 3,000 hospitalized Covid-19 patients on the day of their admission. They found that 40 percent of patients with high viral loads — whose tests were positive at a Ct of 25 or below — died while in the hospital, compared with 15 percent of those with positive tests at higher Cts and presumably lower viral loads.

Image Doctors observed a Covid patient in the I.C.U. Data on viral load, or at least an approximation of it, is readily available in the results from P.C.R. tests, which most labs use to diagnose infection.Credit…Jae C. Hong/Associated Press

In another study, the Nevada Department of Public Health found an average Ct value of 23.4 in people who died from Covid-19, compared with 27.5 in those who survived their illnesses. People who were asymptomatic had an average value of 29.6, suggesting they carried much less virus than the other two groups.

These numbers may seem to vary by very little, but they correspond to millions of viral particles. “These are not subtle differences,” Dr. Greninger said. A study from his lab showed that patients with a Ct of less than 22 had more than four times the odds of dying within 30 days, compared with those with a lower viral load.

But the use of Ct values to estimate viral load is a fraught practice. Viral load measurements for H.I.V. are highly precise, because they are based on blood samples. Tests for the coronavirus rely on swabbing the nose or throat — a procedure that is subject to user error and whose results are less consistent.

The amount of coronavirus in the body changes drastically over the course of the infection. The levels rise from undetectable to yielding positive test results in just hours, and viral loads continue to increase until the immune response kicks in.

Words to Know About Testing

Confused by the terms about coronavirus testing? Let us help:

Then viral loads quickly decline. But viral fragments may linger in the body, triggering positive test results long after the patient has stopped being infectious and the illness has resolved.

Given this variability, capturing viral load at one point in time may not be useful without more information about the trajectory of illness, said Dr. Celine Gounder, an infectious disease specialist at Bellevue Hospital Center and a member of the incoming administration’s coronavirus advisory group.

“When on that curve are you measuring the viral load?” Dr. Gounder asked.

The exact relationship between a Ct value and the corresponding viral load can vary between tests. Rather than validate this quantitative relationship for each machine, the F.D.A. authorized the tests to deliver diagnoses based on a cutoff for the cycle threshold.

Most manufacturers conservatively set their machine’s thresholds for diagnosis from 35 to 40, values that generally correspond to an extremely low viral load. But the exact threshold for a positive result, or for a specific Ct to indicate infectiousness, will depend on the instrument used.

“That’s why I get very anxious about a lot of these assessments on the basis of Ct values,” said Susan Butler-Wu, director of clinical microbiology at the University of Southern California.

“Certainly, it is a value that can be useful in certain clinical circumstances,” Dr. Butler-Wu said, “but the idea that you can have a unicorn Ct value that correlates perfectly with an infectious versus noninfectious state makes me very nervous.”

Other experts acknowledged these limitations, but said the benefit from recording Ct values outweighed the concerns.

“All of those are valid points when looking at an individual patient’s test results, but it doesn’t change the fact that on average, when you look at the admission test results of these Ct values, they really identify patients at high risk of decompensating and dying,” said Dr. Michael Satlin, an infectious diseases physician and lead researcher of the Weill Cornell study.

Dr. Satlin said adjusting his team’s results for duration of symptoms and several other variables did not alter the high risk of death in patients with high viral loads. “No matter how you try to adjust, statistically, this association is extremely strong and will not go away,” he said.

At a population level, too, Ct values can be valuable during a pandemic, Dr. Hay said. High viral loads in a large group of patients can indicate recent exposure to the virus, signaling a nascent surge in community transmission.

“This could be a great surveillance tool for less well-resourced settings who need to understand the epidemic trajectory, but do not have the capacity to carry out regular, random testing,” Dr. Hay said.

Over all, he and others said, viral load information is too valuable a metric to be ignored or discarded without analysis.

“One of the things that’s been tough in this pandemic is everybody wants to do evidence-based medicine and wants to go at the appropriate speed,” Dr. Greninger said. “But we also should expect certain things to be true, like more virus is usually not good.”

What’s on TV This Week: ‘City Hall’ and ‘The Masked Dancer’