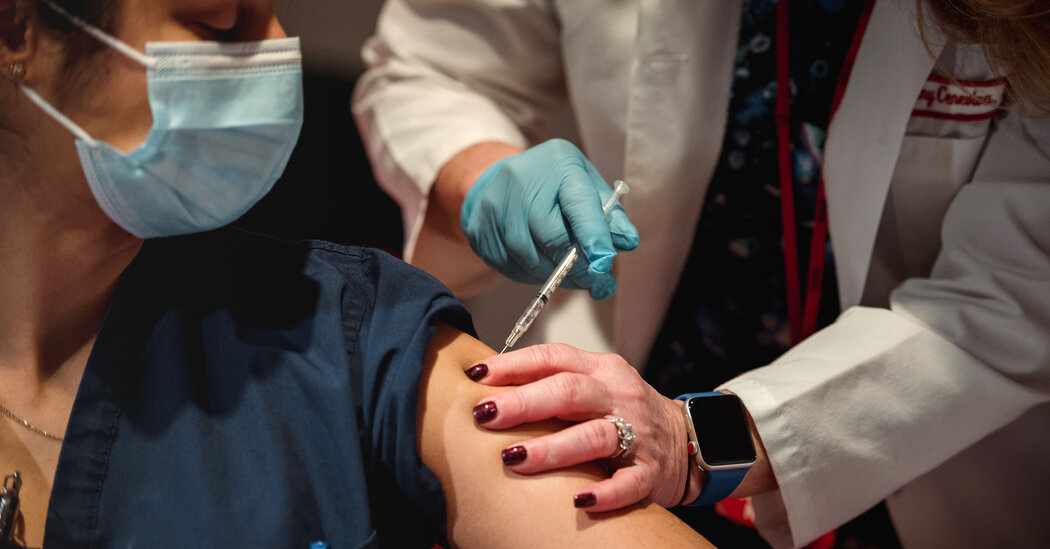 Here is what some of the first Americans to be vaccinated against Covid-19 are saying about how they felt afterward, with some side effects but no second thoughts.

Anika Turkiewicz, a medical resident at Temple University Hospital in Philadelphia, was vaccinated against Covid-19 on Dec. 16.Credit…Hannah Yoon for The New York Times 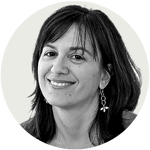 Two and a half hours after being injected with a Covid-19 vaccine, Dr. Taneisha Wilson was hit with the worst headache of her life.

In her home office in Cranston, R.I., Dr. Wilson, 36, an emergency physician with a constitution she calls “horse-like,” laid her head down on the desk. Fighting a wave of nausea, she let out an involuntary groan loud enough to be heard by her husband in a room down the hall.

“It felt like I got smacked,” Dr. Wilson recalled in an interview.

That is not how most people who get the vaccine feel afterward, but reactions like Dr. Wilson’s were not uncommon in the clinical trial results of the two coronavirus vaccines now being distributed across the country. Pfizer, the company that makes the one she received, reported that some 13 percent of recipients aged 18 to 55 had a bad headache after the first dose. About 16 percent of those who received the other vaccine, made by Moderna, in a late-stage trial had a reaction strong enough to prevent them from going about their daily routine.

Dr. Taneisha Wilson was vaccinated against Covid-19 on Dec. 15. She was one of the first Americans to receive the Pfizer-BioNTech vaccine after the Food and Drug Administration authorized it for emergency use.Credit…via Taneisha Wilson

As tens of millions of Americans await their turn for a shot, many are hungering for details about what to expect. So, at the request of friends, colleagues and reporters, some people like Dr. Wilson who were in the vanguard of the biggest vaccination program in U.S. history are beginning to offer their personal accounts.

The New York Times interviewed several dozen of the newly vaccinated in the days afterward. They recounted a wide spectrum of responses, from no reaction at all — “Can’t even tell I had the shot,” said a hospital worker in Iowa City — to symptoms like uncontrolled shivering and “brain fog.” A nurse assistant in Glendora, Calif., wondered whether the fever he ran was a side effect of the vaccine or a sign that he had been infected by one of his Covid-19 patients.

And there was a dizzying variety of sore arms. Some likened the pain to that from a flu shot; for others, it was considerably worse.

Like nearly every vaccine recipient who spoke to The Times for this article, Dr. Wilson stressed that she had no regrets about getting the shot, despite the headache, which was gone within 36 hours. The Food and Drug Administration has found the vaccines to be safe and remarkably effective. And public health leaders say mass vaccination is the only hope for controlling the virus that is now claiming the lives of close to 3,000 Americans a day.

But in these first weeks of vaccination, there is an inescapable element of suspense.

Along with a card reminding them when to get the necessary second dose, vaccine recipients are handed information on how to report side effects to the Centers for Disease Control and Prevention through an app called V-Safe.

The Pfizer-BioNTech and Moderna vaccines both rely on a genetic technology that has never before yielded a vaccine that won regulatory approval. They are authorized for emergency use only. Studies of their safety, including the cases of an Alaska health care worker and a Boston doctor who experienced severe allergic reactions after receiving their shots, are still underway.

And as Dr. Wilson crawled into bed at 10:30 on a weekday morning, she could not help but be “hyper-aware,” she said, “that I had just been vaccinated with this novel vaccine.”

As vaccines go, experts have agreed, the two being distributed now elicit more reactions than most.

At the Sundale Nursing Home in Morgantown, W.Va., Betty Shannon, 81, said some fellow residents had an upset stomach after becoming some of the nation’s first seniors to receive a Covid-19 vaccine.

Lorenzo Alfonso, 34, a nurse assistant in California, was unusually tired and achy.

Delayna Frint, a nurse in Highlands Ranch, Colo., said her arm was so sore after the shot that in order to hang intravenous therapy bags, she had to lower the stands.

But for infectious-disease experts, a nation down for the count with post-vaccine malaise would be the best news in a long time. The side effects dissipate within a few days, and they are a signal, the experts say, that the vaccine is working.

“We call them ‘side’ effects, but it’s really just an effect,” said Dr. Paul Offit, a University of Pennsylvania vaccinologist who is a member of the Food and Drug Administration’s vaccine advisory panel. “This is what your immune response does when it’s responding to an infection.”

The vaccines each work by prompting the body to make a particular protein that the coronavirus uses to enter human cells; neither exposes the recipient to the virus itself. The presence of that protein in the body sets off the production of new antibodies that can destroy the protein — the key to providing protection against a future invasion of the actual virus. But the process also releases substances that can cause inflammation, which can result in fever, fatigue, headache and other symptoms.

Pfizer reported that about one out of eight vaccine recipients aged 18 to 55 had a bad headache after the first of two doses.Credit…Kristian Thacker for The New York Times About one in six people who received the Moderna vaccine in late-stage trials had a reaction that kept them from going about their daily routine.Credit…Cooper Neill for The New York Times

Many more participants in the vaccine trials registered discomfort after the second dose, given three or four weeks later, than after the first. That is probably because by that time, the body is already primed to attack the protein, experts said.

Most of the reactions experienced by the 1.9 million Americans who received a vaccine this month had already been seen among the roughly 35,000 people who were vaccinated in the Pfizer and Moderna clinical trials. But experts expect new ones to appear: “If it’s a one-in-a-million thing, you need a million to see even one,” said Dr. Peter Doshi, an associate professor at the University of Maryland School of Pharmacy.

Some may be mild allergic reactions, like the “body-wide itching” and “mild, small hives along forearm” that Dr. Meagan Hajjar of Farmington, Conn., described in a Facebook post with a video clip. Or they may be more severe, like the handful of cases of anaphylaxis that the C.D.C. has already identified.

And others may simply be more intense versions of what the trials called “fatigue.” Alyson McGregor, an associate professor of emergency medicine at Brown University and an accomplished home chef, said she spent the day after her vaccination in a mental fog that turned her attempt at the most basic of meals into an inedible blob.

“I can’t believe I messed up ramen,” she told her husband that night.

She felt, she said, as though “there was a cloud over me, following me around.”

The first several million doses of both vaccines are earmarked for health care workers and for nursing home residents who are at elevated risk of dying from Covid-19 if they become infected.

Public health leaders have estimated that more than 200 million Americans will need to be vaccinated to effectively prevent the virus from spreading. In polls, a substantial fraction have expressed hesitancy about receiving Covid-19 vaccinations. And some frontline health workers have wrestled with whether discussing their own side effects might deter others from getting vaccinated.

“I do worry —  is it going to encourage someone to have second thoughts?” said Dr. Matthew Harris, 38, an emergency medicine doctor in Great Neck, N.Y.

Dr. Harris was up all night with a fever, shivering underneath a blanket, after receiving the first shot. He had joint pain in his wrists and shoulders that lasted into the next day.

But he had already published a post on Facebook about receiving his shot. It had been an especially emotional moment for him, nine months to the day after he was hospitalized with a severe case of Covid-19 and did not know whether he would survive to see his wife and two young children again.

“Please,” one nonmedical friend commented on his vaccination post, “let us know what the experience is like!!!”

So the next day, he posted about his reaction, with the hashtag #stillworthit.

“Everyone has read, ‘This is the light at the end of the tunnel,’” Dr. Harris said in an interview. “But are people going to feel great 100 percent of the time after this vaccine? No. And if we’re not honest with them, how can we expect them to trust us?”

Dr. Sylvia Owusu-Ansah, an emergency physician in Pittsburgh, has also opted to chronicle her vaccine side effects on Facebook. She is African-American, and at the livestreamed inoculation this month, she told reporters that she “wanted to share with my community that it is OK.” Distrust of the vaccine is particularly high among Black Americans, because of a history of mistreatment of Black people by the medical establishment.

In the name of transparency, Dr. Owusu-Ansah recorded “mild muscle aches and pains with left arm soreness” on Day 1 and “nasal congestion, mild headache” on Days 3 through 5 — pointedly beginning her posts with “I AM STILL HERE!”

Forty-eight hours after Dr. Wilson’s post-vaccine headache sent her to bed, she returned to her job in the emergency room at a hospital. Like many hospitals around the nation, its intensive care unit was crowded with Covid-19 cases. On one recent shift, Dr. Wilson said, there were 12 patients in the critical care bay and only one bed available in the I.C.U. to take them.

“These are people having strokes, myocardial infarction that need catheterization,” she recalled. “You have to understand the reality.”

That time, Dr. Wilson said, it wasn’t a vaccine side effect that made her feel as though she was going to throw up.

She is scheduled for her second dose of the vaccine next month.

Reporting was contributed by Will Wright from Jersey City, N.J., Campbell Robertson from Pittsburgh, and Frances Robles from Key West, Fla.

The House voted to advance $2,000 stimulus checks demanded by Trump.

Vehicles flying Trump flags try to force a Biden-Harris campaign bus off a highway in Texas.

Americans Must Tighten Up, or Double Up, Their Masks, C.D.C. Says