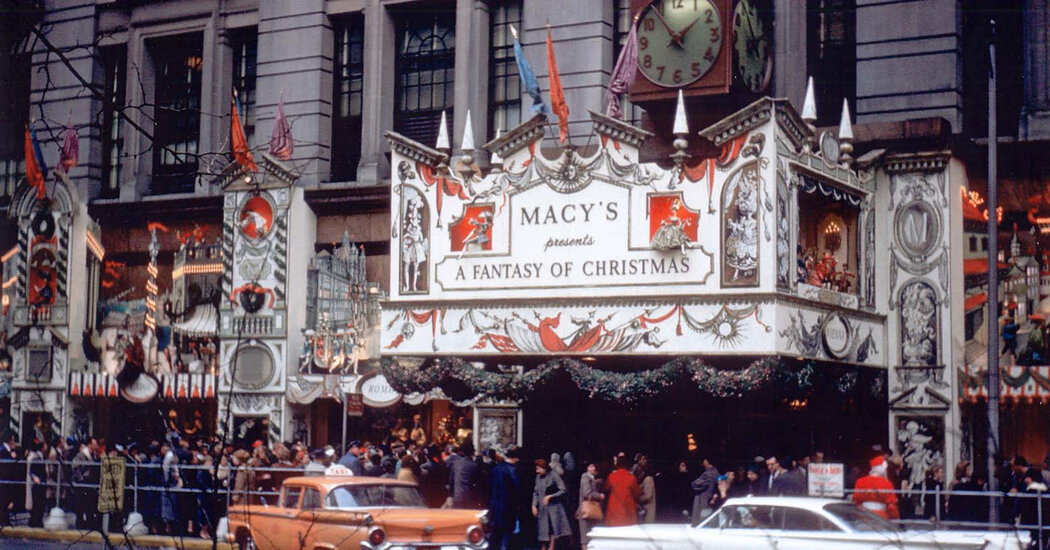 With its fanciful window displays and winter grotto, Macy’s has long been synonymous with Christmas in New York.

Crowds gathered to see the Macy’s Christmas windows in 1959.Credit…Courtesy of Macy’s

In this series for T, the author Reggie Nadelson revisits New York institutions that have defined cool for decades, from time-honored restaurants to unsung dives.

For 159 years, Santa has appeared at Macy’s each winter, first in the store and later in the Thanksgiving parade as well. Come December, he can usually be found on the eighth floor of the 34th Street flagship, in Santaland, 13,000 dizzying square feet of lights, trees and mechanical polar bears with a huge Lionel trainscape. This year, on account of Covid-19, he will be receiving visitors virtually through the store’s website. Nonetheless, he is the real Santa, and Macy’s has him.

“I am not in the habit of substituting for spurious Santa Clauses,” says Edmund Gwenn as Kris Kringle in the movie “Miracle on 34th Street.” In the film, Kringle is Santa; while in New York for the Macy’s parade he finds the fake Santa, the actor set to play him, dead drunk and not up to the job. Horrified, he informs Doris Walker, the executive in charge of the festivities (played by Maureen O’Hara), who is attempting to raise her daughter — a fabulous 8-year-old Natalie Wood as the most perfectly cynical little New York girl — without fairy tales or nonsense like Santa Claus. “I think we should be realistic and truthful with our children,” she says. Of course, as anyone who’s watched this 1947 classic knows, Kringle is then hired to play Santa, despite the fact that the store’s in-house counselor thinks that this man who insists he really is, in fact, Father Christmas belongs in Bellevue.

Image Edmund Gwenn as Kris Kringle, and Natalie Wood and Maureen O’Hara as a couple of skeptical New Yorkers, in the 1947 movie “Miracle on 34th Street.”Credit…© 20th Century Fox Film Corp/courtesy of the Everett Collection

When I speak with Susan Tercero, Macy’s longtime vice president of branded events — the real-life Doris Walker — to find out how she pulls off Santa’s visit each year, as well as the store’s Fourth of July fireworks and annual flower show, she tells me that the preparations for the holiday season take 18 months. In other words, they are always ongoing. For the parade, bands must be chosen from across the country; the huge balloons blown up; the store windows planned and decorated; the Rockettes booked. For Santaland, the sleigh must be parked and the elves recruited. Finally, I ask her how she auditions an actor for the starring role.

“Santa is Santa,” she says.

“Right, but how do you choose him?”

“Santa is Santa,” she repeats.

“Sure, but who plays Santa?”

“Santa is Santa,” she says patiently, as if to a 4-year-old.

“He is a magical being,” she adds.

Curtis Archer, the president of the Harlem Community Development Corporation and a friend of mine who grew up in the Bronx in the 1960s, went to Macy’s each December as a kid with his big sister Marlene. “I would have my face-to-face with Santa,” he recalls, “while sitting on his lap and telling him what I really, really wanted for Christmas — at the time not realizing that it was within earshot of my sister, who would no doubt relay the information to my parents.”

I ask Archer, who is Black, if he thought about Santa always being white but, he says, “I was too young. This was the guy who at the time could make all of my dreams come true. The holiday smells of candy, peanuts and popcorn also linger in my mind.” But for a couple of decades now, as Macy’s spokesperson Orlando Veras explains, there have been multiple Santas in Santaland so that families have a choice of “Caucasian, African-American or Spanish-speaking.” Each, apparently, is the real Santa, which adds to the mind-bending ontological aspects of the whole business.

For a lot of people, Macy’s pretty much owns Christmas. When I was growing up in Manhattan in the 1950s and ’60s, I always called the Thanksgiving event the Macy’s Day Parade. Santa arrived much earlier, in 1861, only three years after the store was founded by R.H. Macy — a former sailor from Nantucket, in Massachusetts — as a dry-goods business on the corner of 14th Street and Sixth Avenue. That shop, thanks in part to Mr. Macy’s genius for advertising, soon grew into a large department store, which was then bought by the brothers Nathan and Isidor Straus in 1895. Macy’s moved to its present location in 1902 and over time became a vast shopping palace — with marble floors, fluted columns and crystal chandeliers — where you could buy a prodigious array of items including watches, mattresses, shoes, cars and even, during World War II, to encourage food production, live chickens.

Macy’s in 1908, when the main entrance was on 34th Street.Credit…Detroit Publishing Co., Library of Congress Prints and Photographs Division

Today, the Manhattan flagship has over 1.2 million square feet of retail space spread across 11 floors and receives as many as 16 million new items every week. And while the company operates 543 locations across the country, for me, there is only the Macy’s at Herald Square. The 34th Street entrance retains its original grand granite arch and Grecian sculpture, and inside the vestibule is a brass plaque that commemorates Isidor Straus and his wife, Ida, who died on the Titanic in 1912. (When the ship went down, Ida stayed with her husband instead of taking a lifeboat; she gave her fur coat to her maid.)

Above the Broadway entrance is the iconic clock, adorned this year with a banner emblazoned with the words “thank you.” The legendary holiday windows, too, are decorated with expressions of gratitude in many languages, in honor of first responders and front-line workers. Typically, the displays are characterized by more playful holiday fare: In 2018 there was a detailed miniature model of the entire department store, complete with mouse figurines clad in tiny versions of the employees’ blue overalls. Normally, after some time spent peering in, kids and their minders head into the store and up to Santaland. This year, there is only the online experience, but it has its moments. It comprises an interactive virtual journey to the North Pole on an animated Polar Express, guided by a pair of extremely perky elves. I couldn’t help but be reminded of David Sedaris’s 1999 essay “Santaland Diaries,” perhaps the funniest Christmas tale ever written, based on his own experience working as a Macy’s elf.

One of the things that keeps Macy’s — the idea of Macy’s — special is its sense of itself, its scale, the way it promotes its own myth, much as New York does. For many people, it is all they know of the city as a child. Tercero still remembers when the band from her high school, in a small town south of Houston, was asked to perform in the parade: “One of the girls came back with a rhinestone-studded ‘I Love New York’ jacket and that was a big deal.”

I grew up in a New York of department stores. Most are gone now. But Macy’s is still with us, a reminder of the mythic city of the 1950s and ’60s, when the store seemed awesome in its size and capacity for seduction. In 1989, I took a Soviet friend on her first trip to America to Macy’s and, in the Cellar, the store’s wonderful, long-gone food hall, she examined everything — the fruit, the fine cheeses, the aromatic coffees — with unequivocal delight.

My mother loved Macy’s Little Shop, one of the first boutiques inside a department store for imported and designer clothes. And my father bought her, from the store’s jewelry department, the diamond ring he couldn’t afford when they were first married. I got horrible dark green shorts and shirts, and one of those dark blue tin trunks, for my much-hated summer camp. Everyone shopped for bargains. “We sell cheaper than any other house,” was the store’s slogan when it first opened. “What always amazed me is that the stork didn’t deliver me to the 34th Street Macy’s on the day of my birth,” says Lois Ketson, a Brooklyn-born school principal and old friend. “I would not have been surprised if my mother’s water broke in the maternity department and she had to be convinced to be rushed to the hospital instead of waiting for her 10 percent discount.”

Sitting at home now, I can only fantasize about wandering around Macy’s, as I did when I was little and hoped I’d be abandoned there for a night. I would ride the wooden escalators (there are still 39 of them), slide across the marble floors, visit the kennels where the security dogs were kept. These days, I might ogle a bag at Burberry, a pair of loafers at Gucci, a suitcase at Louis Vuitton, each of which has its own branded shop on the ground floor. But when Santaland opens next, maybe I’ll take some of my favorite kids. No doubt Rosie and Chloe, Bodhi, Simone, Lyla and Leo will grasp immediately that Santa is, of course, real. No philosophical flimflam for them.

I knew this to be true from an early age. On the night before Christmas, my father would leave a cigar and a drink on the mantel for Santa. (This was Greenwich Village.) In the morning, while I pillaged the presents, I never failed to notice that the cigar had been smoked down to the butt. And the brandy in the glass was all gone.