Louisville Officer Who Shot Breonna Taylor Will Be Fired 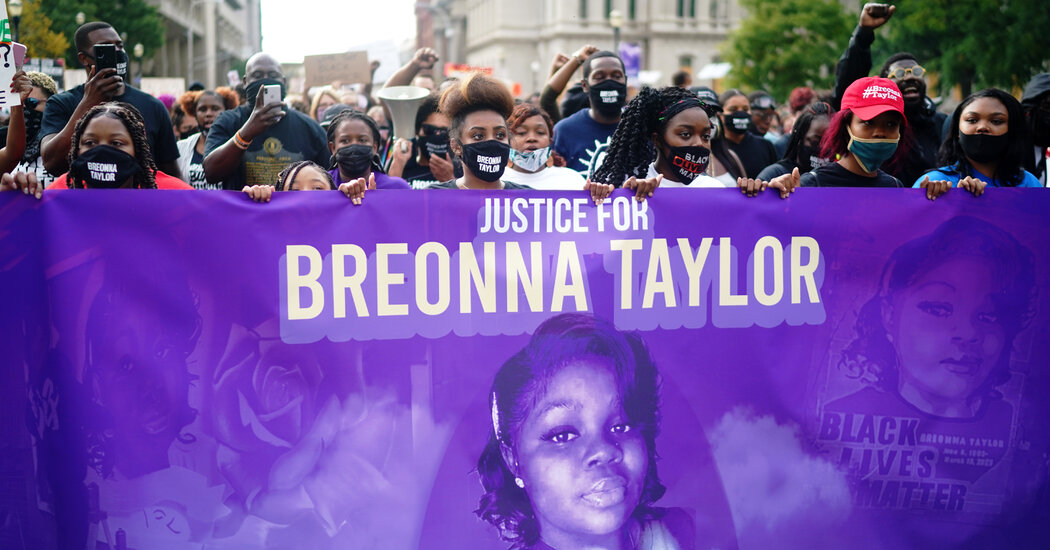 Detective Myles Cosgrove will be terminated along with Detective Joshua Jaynes, who was involved in planning the deadly raid.

Demonstrators in Louisville, Ky., have called for more officers to be fired and charged following the death of Breonna Taylor, who was killed by the police.Credit…Chang W. Lee/The New York Times

The Louisville police officer who fired the shot that killed Breonna Taylor, a Black emergency room technician whose death set off a wave of protests on American streets, was told on Tuesday that the department was moving to oust him from the force, as was a second officer who obtained a judge’s approval for the poorly planned nighttime raid on her home.

The move is the most significant acknowledgment by the department that its officers had committed serious violations when they burst through Ms. Taylor’s door late one night in March, encountered gunfire, and then fired a volley of shots at her and her boyfriend. The terminations mark an effort by the city’s interim police chief, Yvette Gentry, to achieve the reckoning she promised when she came out of retirement to lead the troubled department into the beginning of the new year.

Lawyers for Detective Myles Cosgrove, one of the officers who shot Ms. Taylor, and Detective Joshua Jaynes, who prepared the search warrant for the raid, said each had received notices of termination. Both have been on administrative reassignment as the investigations have been underway.

Until now, the only officer held accountable in the case had been Brett Hankison, a detective, who was fired in June for violating the department’s deadly force policy by shooting off 10 rounds from outside the apartment through two of Ms. Taylor’s windows. He was indicted by a grand jury in September on three counts of wanton endangerment because shots he fired entered a neighboring apartment.

None of the police officers who raided Breonna Taylor’s home wore body cameras, impeding the public from a full understanding of what happened. The Times’s visual investigation team built a 3-D model of the scene and pieced together critical sequences of events to show how poor planning and shoddy police work led to a fatal outcome. 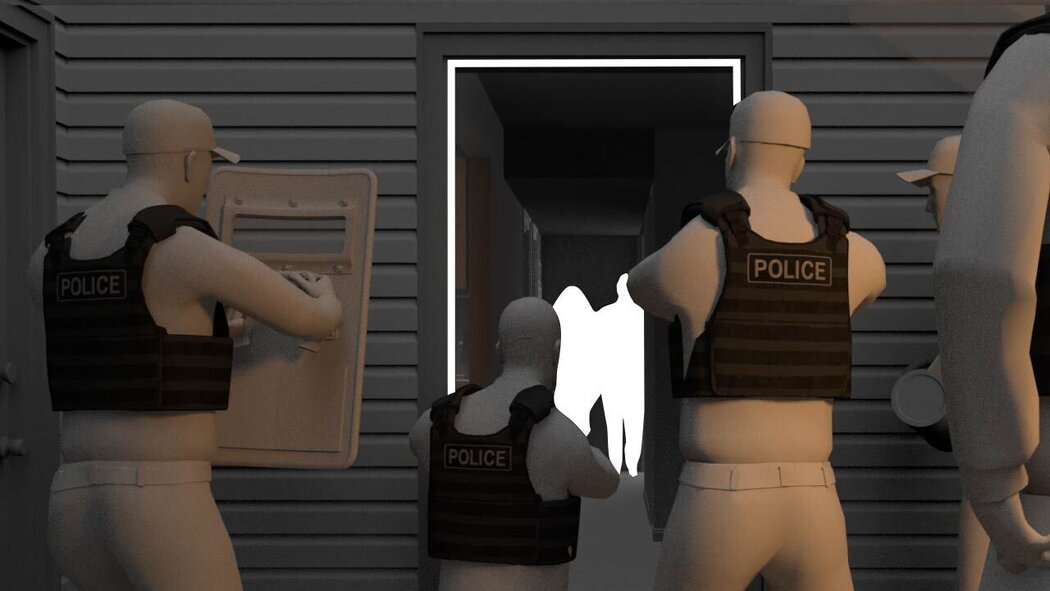 None of the police officers who raided Breonna Taylor’s home wore body cameras, impeding the public from a full understanding of what happened. The Times’s visual investigation team built a 3-D model of the scene and pieced together critical sequences of events to show how poor planning and shoddy police work led to a fatal outcome.

The killing of Ms. Taylor, which rose to national attention around the time of the police killing of George Floyd in Minneapolis in May, helped fuel protests from Portland, Ore., to New York that called on cities to divert money from their police departments.

Each development in the case seemed to bring more outrage, from the fact that none of the officers had been wearing body cameras to the announcement in September that only Mr. Hankison — and neither of the two officers who shot her — would be charged. The anger persisted even after the protests over Mr. Floyd’s death subsided, as protesters asked who was safe from the police if officers could kill a promising young woman in her own home and remain on the payroll.

As the months dragged on, the city’s inaction came to be seen by many in Louisville as representative of a culture of impunity, and a message that there were few consequences for police officers who killed Black residents.

Mayor Greg Fischer, a Democrat, resisted calls to fire the previous police chief until June, when a popular restaurant owner was shot and killed as police officers and National Guardsmen attempted to disperse public demonstrations over Ms. Taylor’s death.

But when Chief Gentry, who retired in 2015, took over as interim chief, she promised a different approach.

“She did the heavy lifting that many men before her — many chiefs — have been unable to do,” said Jessica Green, the chairwoman of the City Council’s public safety committee. She said she expected that more officers would be disciplined.

Chief Gentry, who is Black, has been clear that she is not interested in a permanent appointment, and her time as interim chief is soon coming to a close. Mr. Fischer is expected to announce a permanent chief early in 2021, but he has kept the search under wraps. Whoever takes the job will face a mountainous challenge. When the city asked residents what qualities they wanted from a police chief, nearly a quarter of respondents urged the city to “defund the police.”

Ms. Taylor’s family and activists have demanded criminal charges, a decision that now rests with the F.B.I., whose agents are reviewing the case for possible federal crimes, such as civil rights violations.

The Justice Department, which oversees the F.B.I., has scaled back its oversight of local police forces under President Trump, and on Tuesday, the department announced it was not bringing any charges after a yearslong investigation into the police killing of Tamir Rice, a 12-year-old Black boy in Cleveland who was shot while holding a pellet gun. President-elect Joseph R. Biden Jr. has condemned Ms. Taylor’s killing but said little about the decision not to file charges against any other officers.

The March 13 raid, in which Louisville officers were searching for evidence in a drug case, was compromised by poor planning and reckless execution, a New York Times review of witness accounts, video footage and officer statements showed. For nearly 30 minutes after Ms. Taylor was shot, she received no medical care.

Police officers said they knocked loudly on her door and repeatedly announced themselves, though most of the neighbors said they did not hear them do so. Ms. Taylor’s boyfriend, Kenneth Walker, said he and Ms. Taylor had been in her bedroom and were terrified by the noise; after the officers knocked the door off its hinges and entered the apartment, Mr. Walker fired a shot toward the door, striking one of the officers in the leg.

Detective Cosgrove, a 15-year veteran of the department, shot Ms. Taylor at least three times, killing her, according to an F.B.I. ballistics analysis. He was the second person to enter Ms. Taylor’s apartment and fired 16 rounds down the hallway, according to the analysis.

Detective Jaynes, who did not take part in the raid, had been assigned to a unit formed shortly before the operation that was designed to focus on micro-locations plagued by violent crime. After analyzing crime statistics, the unit focused its attention on a street of derelict and abandoned houses in West Louisville, where Ms. Taylor’s former boyfriend was suspected of operating a series of trap houses.

At issue in the accusations against Detective Jaynes is the search warrant affidavit for Ms. Taylor’s apartment that asserted that the police had spoken with the U.S. Postal Service and verified that parcels intended for Ms. Taylor’s ex-boyfriend had been delivered to her apartment. Chief Gentry said Detective Jaynes had been misleading because he had actually gotten the information not from the Postal Service, but from another police officer.

“Having an independent, third party verify information is powerful and compelling information,” Chief Gentry wrote in the letter to Detective Jaynes, a copy of which was reviewed by The Times. “The inclusion of this in the affidavit as a direct verification was deceptive.”

Thomas Clay, the detective’s lawyer, said his client had never lied in getting the search warrant to search Ms. Taylor’s apartment.

“They have basically tried to throw him under the bus and he’s not going to fit under the bus because he did nothing wrong,” Mr. Clay said. Detective Jaynes will have an opportunity to respond to the chief’s claims at a department hearing on Thursday, according to the letter. A lawyer for Detective Cosgrove, Jarrod Beck, declined to comment beyond confirming that his client had also received a termination letter.

Ms. Taylor’s family claimed that no drugs or proceeds of drug trafficking were found at her apartment. The police department counters that it never conducted a full search, calling it off once the shooting occurred. In a series of recorded jailhouse calls in the hours after her death, Ms. Taylor’s ex-boyfriend told another woman that he had left thousands of dollars with Ms. Taylor.

Grand jurors declined to pursue charges against Detective Cosgrove or Sgt. Jonathan Mattingly, the officer shot in the leg who also shot Ms. Taylor. Their decision led to raucous protests in which two Louisville police officers were shot.

Several grand jurors have since said that prosecutors did not ask them to consider homicide charges, and protesters have expressed anger at Daniel Cameron, the Republican attorney general who oversaw the proceedings. But legal analysts have said that the officers could be seen to have been acting in self-defense because Mr. Walker fired the first shot.

About 15 hours of audio recordings of the grand jury proceedings were released in October, which included conflicting accounts over whether the police outside Ms. Taylor’s door had identified themselves.

Beyond the assertions of the officers, the only support for the grand jury’s conclusion that they had done so was the account of one witness who had given inconsistent statements.

When the grand jury asked a detective who worked in the attorney general’s office if there had been any formal plan for the raid, he responded that he was not aware of one, except for a whiteboard that had a list of raid targets and the officers assigned to each.

Following the raid, Louisville officials banned the use of no-knock warrants, which allow the police to forcibly enter people’s homes to search them without warning. In the raid of Ms. Taylor’s apartment, officers had received court approval for a no-knock entry, but the orders were changed before the operation to require them to identify themselves.

Ms. Taylor’s family and supporters have called for punishment and criminal charges against all the officers who had a hand in her death. In September, Louisville officials agreed to pay $12 million and institute reforms in order to settle a wrongful-death lawsuit filed by Ms. Taylor’s mother, Tamika Palmer.

Chief Gentry’s move to terminate the officers was celebrated by many activists on Tuesday, even as they said that more reforms must follow.

“There was really no way for our community to begin to heal without something being done with the officers involved,” said Sadiqa Reynolds, who leads the Louisville Urban League, adding, “It takes courage to come in behind these white men who said they couldn’t do anything and to do something.”

Reporting was contributed by Rukmini Callimachi, Malachy Browne, Will Wright and Austyn Gaffney.

Modi’s Party Loses a Key Election, Held Under the Cloud of Covid