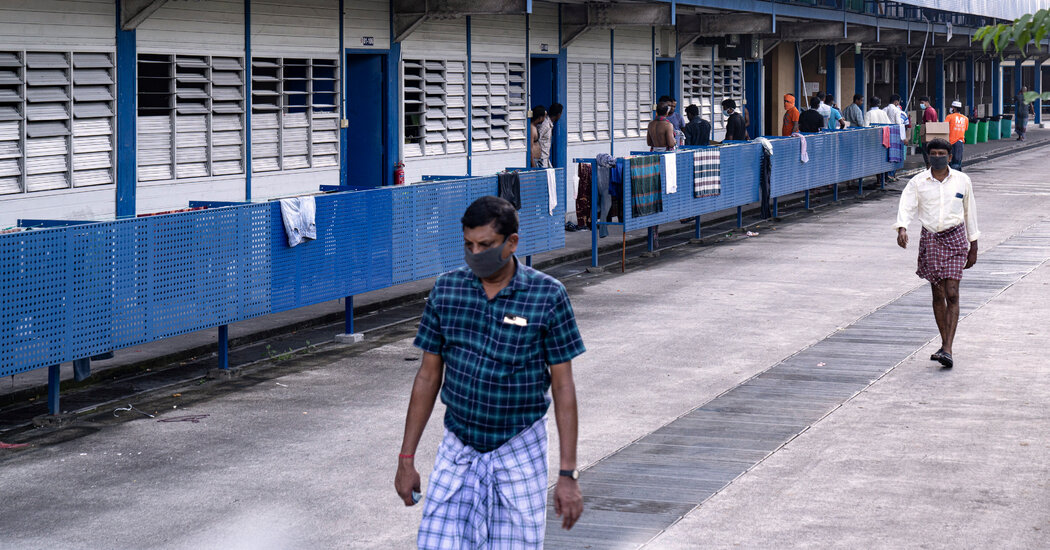 Xi sets the tone for the next five years.

Image Migrant workers at a dormitory in Singapore in April.Credit…Ore Huiying for The New York Times

Hundreds of thousands of migrant workers who have largely been confined to dormitories since last spring will be allowed to visit designated recreation centers on their days off starting Saturday, if they test negative for the coronavirus.

There must also be no active cases in the dorms, which had a surge of infections in April. Even as stay-at-home orders were lifted for other residents, migrant workers were barred from leaving the dorms, except for work and essential errands.

The eight recreation centers across Singapore are central to the lives of workers — who go there to get haircuts, buy groceries, wire money to their families back home and socialize. Workers who wish to leave their dorms will use a government smartphone app to apply for permission and choose a time slot.

Context: Singapore’s economy is highly dependent on more than 300,000 migrant workers, largely from South Asian countries, who work in sectors such as construction, shipbuilding and manufacturing. They earn about $400 to $500 a month. The pandemic has renewed longstanding questions about inequality and their treatment.

China’s leader has wrapped up a Communist Party meeting newly emboldened, outlining a road map for the country for years to come.

The meeting of the Central Committee affirmed President Xi Jinping as “the core navigator and helmsman,” echoing Mao-era language. Mr. Xi has used the meeting to show that he remains unchallenged nine months after the coronavirus plunged China into its worst crisis in decades.

Takeaways: The party’s goals for the next five years — a draft of which the Central Committee endorsed on Thursday — include greater technological self-reliance and a stronger military to protect the country’s economic and political interests.

Mr. Trump has plowed ahead with an aggressive schedule of rallies packed to the brim, while Mr. Biden has hosted socially distanced drive-in rallies, public health briefings and speeches about unifying the nation.

The messages they’re trying to send couldn’t be more different: Mr. Biden wants to build on the polls that show he is more trusted than Mr. Trump to handle the pandemic. Mr. Trump has continued to downplay the severity of the coronavirus, and has declared that it is vanishing before largely maskless crowds.

The strategy: The Trump campaign has focused heavily on the crucial battleground state of Pennsylvania. It has filed lawsuits to curtail how late mail-in votes can be accepted and to challenge other rules and procedures. The campaign has also dispatched people to early voting sites, videotaping voters.

The numbers: Nearly 80 million Americans have cast their ballots ahead of Election Day, on Tuesday (see our Back Story about voter turnout below). Polls show the race tightening, but most still show Mr. Biden in the lead.

If you have 5 minutes, this is worth it

Caught in a rocket attack in Barda, Azerbaijan, our reporters captured the agony of an expanding war. There is every sign that the fighting between Armenia and Azerbaijan is escalating and the casualties are mounting. Above, the funeral of a 7-year-old girl killed by a rocket.

“Please help us,” said Yagubiya Hamidova, a cardiologist who had recently moved from a frontline town to Barda. “No one in the world knows what is happening to us.”

France attack: Two weeks after the beheading of a French schoolteacher, three people were killed in a knife assault at a church in Nice. Officials said it was an act of terrorism, and it was quickly followed by two similar events, though it was unclear if they were coordinated.

South Korea: The country’s Supreme Court upheld a 17-year sentence for former President Lee Myung-bak and ordered him sent back to prison. He was charged in 2018 with corruption, including accusations that he had collected millions in bribes from various sources.

Vietnam typhoon: Typhoon Molave slammed into central Vietnam and set off a series of landslides that buried villages and towns and left more than 60 people dead or missing. It was one of the biggest storms to hit the country in two decades.

Poland: Tens of thousands of women took to the streets on Wednesday in dozens of cities and towns for a nationwide strike to protest a top court’s decision to ban nearly all abortions, even as the nation’s leading politician urged his conservative supporters to “defend Poland.”

Snapshot: Above, Elise Lauriot Prevost, who is struggling to pay off student loans in Paris. Like millions of young people across Europe, she has suddenly found herself shut out of the labor market as the economic toll of the pandemic intensifies. Years of job growth has eroded in a matter of months, leaving more than twice as many young people than other adults out of work.

What we’re reading: This Bloomberg article about the K-pop stans fighting QAnon and becoming a force on social media. It’s a complex and interesting tale of one of the most devoted fan bases in music.

Cook: This giant couscous cake with roasted pepper sauce is very versatile. You can substitute the couscous with other cooked grains or make use of whatever herbs, cheeses or spices you have on hand.

Watch: “Raining in the Mountain,” from 1979, is the latest film by the Hong Kong director King Hu to be restored. Our critic says it’s “spectacular, exhilarating entertainment.”

Do: If you witness a concerning event and want to avoid being silently complicit, here’s how to be an active bystander and make discreet choices to respond to the behavior.

It’s almost the weekend. At Home has ideas on what to read, cook, watch, and do while staying safe at home.

Since the 1960s, between one-third to a half of eligible voters in the United States have stayed home — resulting in one of the lowest turnout rates among similar countries. Just under 56 percent of the voting-age population, or 136.8 million people, went to the polls in 2016, the Pew Research Center found.

That was an uptick from 2012, but down from the highest recent peak for Americans — 2008, when 61.6 percent of voters turned out and gave President Barack Obama his first term.

“I try to avoid it because it gets angry and nasty,” said Susan Miller of voting. She said the only time she had ever cast a ballot was for Barack Obama in 2008.Credit…Hannah Yoon for The New York Times

So far, there is record early voter turnout for the upcoming Nov. 3 election, especially in battleground states often decided by slim margins. But some will still opt out: Politicians “rent space in my brain and they frustrate me, but in the end, they do what they want anyway,” Fannie Sanchez, 44, who voted once for Barack Obama, told our reporter.

Voter apathy appears stronger among young Americans. Fewer than half of those 18 to 29 voted in the 2016 presidential election — about 15 points lower than the overall turnout. That seems to be in sync with the rest of the world: The Upshot found in an analysis of global voter data that young people don’t outvote their elders anywhere.

But in countries where overall voter participation tends to be high, turnout among the younger age group tends to be high as well. Researchers have found it can come down to a few factors: voting being a habit formed over time, opportunity cost as an obstacle and participation in alternative political action methods, like protesting.

That’s it for this briefing. See you next time.

Thank you
Carole Landry helped write this briefing. Theodore Kim and Jahaan Singh provided the break from the news. You can reach the team at briefing@nytimes.com.

P.S.
• We’re listening to “The Daily.” Our latest episode is about the specter of political violence in the United States.
• Here’s our Mini Crossword, and a clue: What the mute button affects (five letters). You can find all our puzzles here.
• Nikita Stewart, a reporter on our Metro desk, is being promoted to assistant editor.