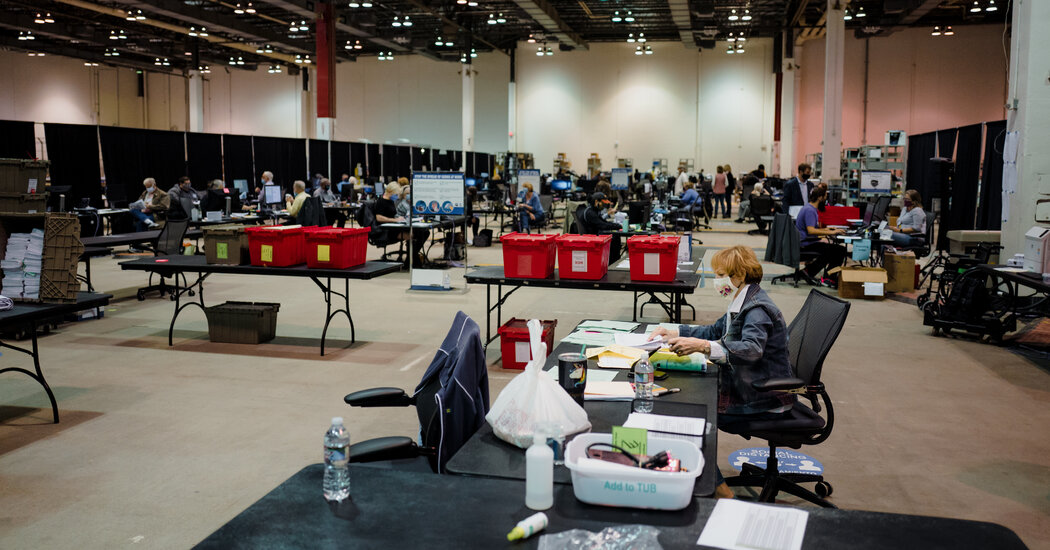 Mark A. Aguirre, a former police captain hired by a conservative group to investigate voter fraud, pointed his gun at a man and pinned him to the ground, officials said. No fake ballots were found.

A former Houston police captain, who the authorities said was investigating a voter fraud conspiracy theory for a conservative activist group, was arrested and charged with pointing his gun at an air-conditioner repairman he had pursued to try to uncover fraudulent ballots, prosecutors said Tuesday.

The former captain, Mark A. Aguirre, 63, was arrested and charged with aggravated assault with a deadly weapon, and then freed on $30,000 bail, on Tuesday.

According to a police affidavit, Mr. Aguirre struck the repairman’s box truck with his sport utility vehicle on the morning of Oct. 19. When the man got out of his truck, Mr. Aguirre pointed a handgun at him, ordered him to get on the ground and pressed a knee into his back, it said.

Other people who arrived searched the repairman’s truck for ballots and, finding none, drove it away, the repairman said, according to the affidavit. The truck was found abandoned nearby.

Mr. Aguirre had been hired by a conservative activist group, the Liberty Center for God & Country, to investigate claims of voter fraud, according to a statement from the office of Kim Ogg, the Harris County district attorney.

Mark A. Aguirre, who was fired in 2003 as a Houston police captain, was charged with aggravated assault with a deadly weapon and then freed on $30,000 bail.Credit…Houston Police Department, via Associated Press

“He crossed the line from dirty politics to commission of a violent crime and we are lucky no one was killed,” Ms. Ogg said. “His alleged investigation was backward from the start — first alleging a crime had occurred and then trying to prove it happened.”

Mr. Aguirre spent more than two decades working for the Houston Police Department and was fired in 2003 after he led a botched raid targeting drag racers that ended in the unlawful arrests of about 300 people, whose records associated with the episode were later cleared.

Across the United States, a series of lawsuits by the Trump campaign and its allies claiming voter fraud have been tossed out of state and federal courts. Elections officials representing both parties have said there was no evidence that fraud played any role in determining the election outcome.

The Liberty Center group that hired Mr. Aguirre had promoted the false narrative that mail-in ballots would be used to steal the election from President Trump. According to the district attorney’s office, the group paid $266,400 to Mr. Aguirre, and $211,400 of that was deposited into his account the day after his collision with the repairman’s truck.

Terry W. Yates, a lawyer representing Mr. Aguirre, questioned why the charges were not filed until nearly two months after the episode.

“It’s a political prosecution,” Mr. Yates said, adding that the confrontation on Oct. 19 began as a fender-bender and was now being used to undermine the Liberty Center. “The powers that be in Harris County are attempting to use this as a diversionary tactic to show there’s no voter fraud here, which is ridiculous,” he said.

The Houston police said in a statement that “a lengthy investigation by H.P.D. determined allegations of election fraud were unfounded and no evidence of illegal ballots was found” before the case was referred to the district attorney’s office.

Leaders of the Liberty Center did not immediately respond to requests for comment. Jared Woodfill, a lawyer who is the president of the center, told the television news outlet KFYR that the organization had hired Mr. Aguirre as an investigator. But he expressed doubt about officials’ version of the events on Oct. 19. “I would be shocked if that’s what happened,” he said.

On the day of the confrontation, the repairman initially thought he was being robbed and feared for his life, according to an affidavit from Detective John Varela of the Houston Police Department.

Mr. Aguirre told Detective Varela that he and the Liberty Center had been investigating a ballot harvesting conspiracy, according to the affidavit, and that he and his friends had been surveilling the repairman’s home for four days.

The affidavit said that Mr. Aguirre claimed the repairman “has approximately seven hundred and fifty thousand fraudulent mail ballots and is using Hispanic children to sign the ballots because the children’s fingerprints would not appear in any databases.”

Mr. Aguirre said that he had been conducting surveillance when he accidentally crashed into the repairman’s truck, adding that he then got out of his vehicle and pointed his gun at the repairman, according to the affidavit.

It added that Mr. Aguirre had also made attempts to enlist local officials in his cause: Three days before the collision, Mr. Aguirre had asked an official with the Texas Attorney General’s Office to conduct a traffic stop in order to investigate the repairman. And while being interviewed by Detective Varela on Oct. 19, Mr. Aguirre said that the detective could either be a hero or a part of the problem, according to the affidavit, adding: “I just hope you’re a patriot.”

The affidavit said that the repairman gave Houston police officers his consent to search his home, truck, and storage shed. They did not find any evidence of voter fraud.

A Tale Old and New as Another Royal Wife Breaks Free