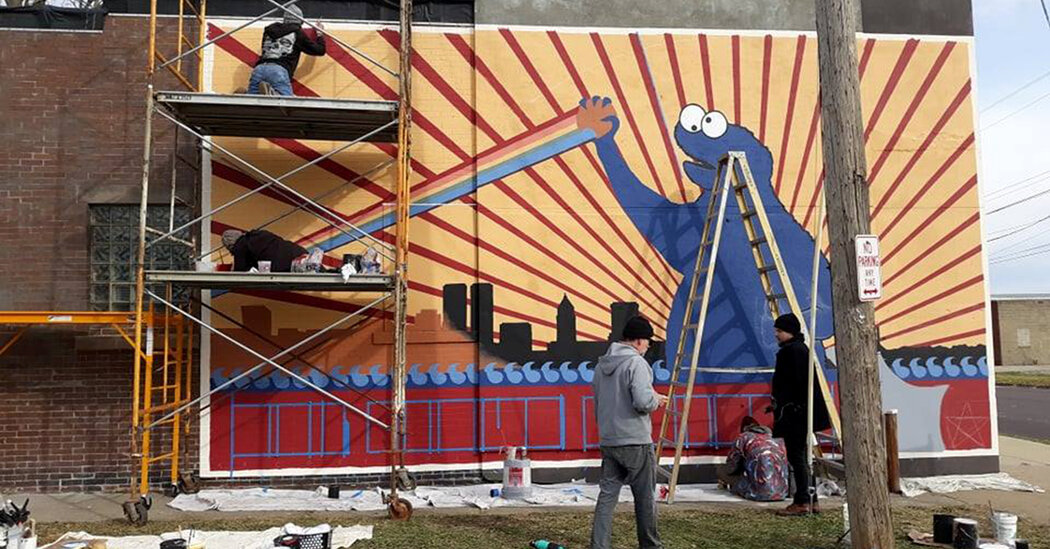 A man claiming to be a property owner in Peoria, Ill., wanted a Soviet-style mural of Cookie Monster. The artist who did the job now says he was tricked (and paid) by an impostor.

The artist Joshua Hawkins said it took 10 people to complete the mural in Peoria, Ill., over Thanksgiving weekend.Credit…Joshua Hawkins

Joshua Hawkins said the request seemed “pretty weird,” but the dark-haired man who made it was offering cash, and a lot of it.

The man said his name was Nate and he wanted Mr. Hawkins, a local artist, to paint an enormous Soviet-style mural of Cookie Monster — the voracious, pastry-loving “Sesame Street” creature — and three Russian words on a commercial building in Peoria, Ill.

When the job was done over Thanksgiving weekend, the man paid in full and Mr. Hawkins, 33, proudly displayed the mural on his Facebook page.

But Mr. Hawkins learned C can also be for Caper.

Less than a week after the mural went up, Mr. Hawkins said he received a call from the real Nate Comte, who said he had never commissioned the Cookie Monster mural.

He also made his feelings about the mural very clear: He swiftly used white paint to cover the wall.

In a brief interview, Mr. Comte expressed fury over the attention that the apparent prank had gotten from national and international news outlets.

“This isn’t news,” Mr. Comte said, then added an expletive. “I’ll give you a headline: Man paints his own building wall.”

Image Mr. Hawkins said he learned around Dec. 5 that Nate Comte, the real owner of the building, had painted over the mural. Credit…Joshua Hawkins

“I don’t hate art,” he earlier told The Journal Star of Peoria. “But I don’t know what the hell that was.”

“I wish I had the patience to pull this elaborate of a prank off,” he said.

Mr. Hawkins, who apologized to Mr. Comte on his Facebook page, said he was still trying to figure out the real identity of the man who hired him, whom he described as tall, fit and in his 40s. He has scoured social media for clues, kept an eye out for the fake Nate’s truck and wondered about the connection between the man who hired him and the real Mr. Comte.

“I’m telling you I’ve been trying,” Mr. Hawkins said. “I don’t know if it’s some friend of his or a pissed-off neighbor or some distant relative that’s pulling a prank, but it’s curious.”

One thing Mr. Hawkins said he is confident about: The fake Nate knew Mr. Comte.

“He knew his building, he knew his name and he knew he wasn’t there,” Mr. Hawkins said.

Around Peoria, a riverfront city of about 110,000 people in central Illinois, the episode has spawned an untold number of theories about who might have commissioned the mural.

“We just kind of like the mystery of it,” said Jenn Gordon, executive director of ArtsPartners of Central Illinois. “Whoever was behind it, they certainly put a spotlight on Peoria.”

Mr. Comte erased the mural despite the consternation of some in the local arts community, who expressed sadness and even anger about its removal.

Mr. Comte told The Journal Star that he had received “hate mail” for painting over the vibrant colors and the Russian words, which put a Cookie Monster twist on an old Bolshevik slogan, “Peace, land and bread.”

The mural of Cookie Monster, with the Russian text, “Peace Land Cookies!”Credit…Joshua Hawkins

Mr. Comte confirmed that he had created a Facebook page, “Graffiti Replacement Mural,” inviting people to post an image to replace the mural he had whitewashed.

“The owner will select the winning design and hire a local artist to paint it,” the page said.

In retrospect, Mr. Hawkins said, he could have asked more questions. The design request was an odd one for Peoria, where Mr. Hawkins said businesses usually commission murals of families, celebrities from the city, and animals.

Mr. Hawkins said the man never showed him any permits or proof he owned the building. He did not say what he did for a living and never gave his full name. He only provided the last name Comte in a two-sentence email that he sent Mr. Hawkins with a copy of the design.

“The design is attached,” the email, dated Nov. 23, said. “The graphic designer put it a one foot scale grid over it so you can lay it out from this image. Sincerely, Nate Comte.”

An email sent to the account seeking comment was not answered. Neither was a message left on the voice mail of a phone number provided in the email.

Mr. Hawkins said he first met the man at an art show in Peoria about a year and a half ago. He did not hear from him again until he called him the week before Thanksgiving to commission the mural.

“I was really hesitant at first because it’s a pretty big mural,” Mr. Hawkins said. But the man was offering enough money that Mr. Hawkins would be able to hire a large crew to help him.

Mr. Hawkins asked him what the Russian words meant and the man replied, “Peace, land, cookies.”

“I thought he was opening a bakery,” Mr. Hawkins said.

Later that day, when the mural was finished, Mr. Hawkins called him and texted him to come and see it. The man never responded and Mr. Hawkins said he has not heard from him since. Mr. Hawkins declined to say how much he was paid.

The episode will remind artists to ask more questions of people who commission their work, said Ms. Gordon, the art program director.

“This is a relatively small community, and I think there is just a little bit of good faith from artists when they’ve been commissioned to do a piece,” she said.

The neighborhood where Mr. Hawkins painted Cookie Monster is a mix of residential and industrial buildings largely bereft of the colorful murals that dot other parts of the city, said Katy Shackelford, an urban planner in St. Louis who lived in Peoria for more than five years and advised on public art installations.

The fast removal, however, gave the mural and its “cheeky” take on the Bolshevik rallying cry a significance it otherwise might not have had, Ms. Shackelford said.

“I think the message went further because it was temporary,” Ms. Shackelford said. “If it had stayed up over time, people would have been like, ‘Man, that was an ugly mural.’”

Despite the stress the trickery caused, Mr. Hawkins said he was not vexed with his mysterious patron, whom he described as an “honest liar.”

In other words: Me no angry.

“The guy paid me and he paid me pretty well,” Mr. Hawkins said. “So I’m not mad at all about that.”