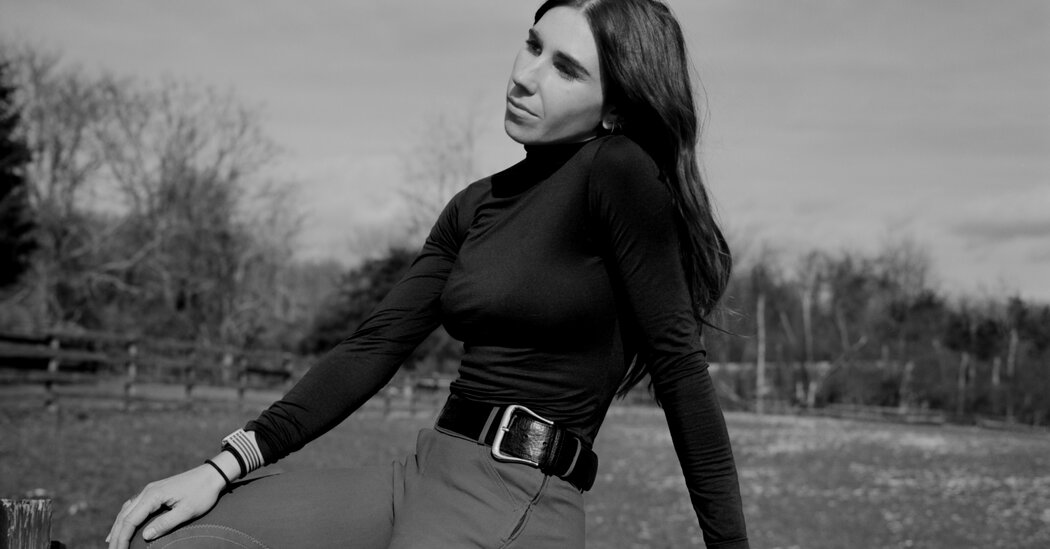 The former “Girls” star, who played a mordantly comic lawyer in “The Flight Attendant,” spends her days at the barn and her nights with David Sedaris and Meryl Streep.

Zosia Mamet, who stars in “The Flight Attendant,” with her horse, Ten: “She’s the love of my life (don’t tell my husband) so just being with her makes me happy.”Credit…Heather Sten for The New York Times

When Zosia Mamet auditioned for “The Flight Attendant,” Kaley Cuoco unexpectedly booped her on the nose. Mamet reacted by swatting her hand away, and a relationship was born.

“We had this immediate chemistry,” said Mamet, who is best known as the “Girls” naïf, Shoshanna Shapiro, “and the scene, just like lava, flowed out of us.”

In “The Flight Attendant,” the zingy thriller on HBO Max that just finished its first season, Cuoco plays the booze-swilling Cassie Bowden, who picks up a passenger on a flight then wakes up in Bangkok with his dead body in bed beside her — and no memory of the night before. Mamet is her best friend, Annie Mouradian, a stony-faced lawyer who keeps the F.B.I. at bay using skills she cultivated while representing mob wives.

At the moment, Mamet is nesting in New York’s Hudson Valley, with her husband, the actor Evan Jonigkeit, and their dog, Moose. But she more or less lives at the horse stables down the road, doling out snuggles and peppermints to her thoroughbred, Ten. In a Zoom interview from her 1920s Sears catalog cabin, with a log wall behind her, Mamet talked about life in and out of the riding ring, and her seasonal affliction. These are edited excerpts from the conversation.

Woke up at 8. I’m a big-time sleeper. My husband says I could sleep through anything. But I wanted to get up early to give Moose a good long walk. First things, first: coffee, made in a French press with a big chunk of oat milk. I used to be quite picky about the brand of coffee, and I’m not anymore. I know this is a controversial point for snobby coffee drinkers, but we love a flavored coffee in our house, like a hazelnut or a vanilla.

Image Mamet is nesting with her husband, the actor Evan Jonigkeit, in the Hudson Valley. Credit…Heather Sten for The New York Times

The barn is about a 25-minute drive from our house so I normally either do NPR, Howard Stern, music or a podcast. I love a good podcast. Today was the new Whitney Cummings with Alison Brie. I didn’t get past the opening but that alone was killing me. They were talking about the frustration with stores putting stickers on things that you can’t get off, and it leaves this horrible residue. The struggle is real.

My horse, Ten, sadly has a boo-boo in her front right foot, so she’s currently on what’s called stall rest, which is basically the equivalent of bed rest for a human. I’ve been gone for almost a month, and she’s developed this very sweet silly habit of trying to nibble on every part of me. Yesterday it was my beanie. Today it was the arms of my jacket. But she’s the love of my life (don’t tell my husband) so just being with her makes me happy.

Evan is still in Pittsburgh shooting a new Netflix show called “Archive 81,” so we chatted on my drive home. We like to stay as much a unit as possible. I went out there for three weeks, and then I came home a little bit earlier than him because I wanted to be with Ten. The minute I found out she got hurt, he was like, “If you need to go home, I’ll understand.”

My best friend, Emma, claims that I was an elf in a previous life. I do all the Christmas shopping for both of our families and all of our friends, so I’m currently set up in our living room surrounded by presents, my Christmas 2020 Excel spreadsheet, wrapping paper, scissors, ribbon, tape. All the essentials. I listened to Alabama Shakes. Evan proposed to “I Found You,” and sometimes when I miss him, I put them on.

I’m in bed with a hot water bottle because I’m 90 and watching “The Queen’s Gambit.” I’m trying to savor it because I just think it’s so good. No, I have not learned chess. A card game like rummy, that’s my jam. Chess is too much for my brain to handle.

I have a book problem, and there is a stack on my bedside probably 10 books high. I’m currently halfway deep into the latest David Sedaris, “The Best of Me,” and loving every second. I adore him. I’ve read almost all of his books and also listened to a lot of them on tape. His writing is so wonderful to begin with, but then when you hear him reading his writing, it just elevates it to the next level.

Evan is the one that got me into the routine of putting music on first thing in the morning. It sets the tone for the day. Whitney Cummings mentioned the Lone Bellow the other day on her podcast, and I hadn’t listened to them in forever, so that’s what was on this morning.

Spotify very kindly made me a 2020 playlist of the things I’d listened to most, so I put that on my drive to the barn. It was cold but sunny, so it was more of a sing-at-the-top-of-your-lungs-with-the-window-slightly-down than listen-to-a-podcast kind of day. A few faves on the playlist: Red Hearse, Lucy Dacus, Billy Joel, Fleetwood Mac, Phoebe Bridgers. Portugal. The Man is also on there; Nathaniel Rateliff, who came out with a solo album this year that’s super beautiful and lovely. Oh, there’s this great album that I love called “Trio.” It’s Dolly Parton, Linda Ronstadt and Emmylou Harris. Sometimes when I’m cleaning the house, I’ll listen to it on repeat because their harmonies sound like angels.

“My husband is like, ‘How do you spend six hours at the barn?’”Credit…Heather Sten for The New York Times

I got to the barn and first had to say hi to Tenny because she’s my princess unicorn, so she needs treats and kisses. Then I got to ride a Polly Pocket-size pony named Snickers. I had my lesson with my amazing trainer Vanessa. I got to ride one of our barn’s trusty steeds named Junior, who gave me a run for my money.

My husband is like, “How do you spend six hours at the barn?” Well, we have to untack the horse. When we jump them, we wash their legs and spray them with liniment that keeps their legs healthy. Then we clean all of our tack. It’s part of the process that I love just as much as the riding — the care of the horse, the care of my tack.

I stopped at Michaels because I needed a wreath hanger for our door. In middle and high school, there are horseback riding teams called [Interscholastic Equestrian Association], and there’s a whole show circuit. Our barn has one, and each year they take old horse shoes and paint them red, blue, green, silver or gold, and they make wreaths and sell them to raise money for the I.E.A. team. So I got one.

I spent a little time decorating. I love Christmas more than anything. My maternal grandmother had this way of making Christmas exceptionally magical. There were all of these traditions, and the house was full of smells and sounds and lights. We always decorated the tree together. I’ve been enamored with magic since I was little, and what is more magical than Christmas? I’m the person who will sit on the stairs with all the other lights off at night and just watch the tree.

I finally realized I was starving so I went with tacos. I listened to Phoebe Bridgers’s new holiday album, which is heartbreaking and gorgeous and sadly only four songs, so I had it on repeat for a bit. Then I put on “The Prom,” which was delightful, while wrapping presents. Elf duties.

I love Marc Maron’s podcast, and a friend recommended his episode with Glenn Close, so I finished that up on the way to the barn. What an epic human. What a crazy life. I had no idea she was in a cult!

There are a few podcasts I’m obsessed with. I love “You Must Remember This,” which is all about old Hollywood. On the drive to Pittsburgh, I listened to “Dr. Death.” Oh my God, it’s crazy and fascinating. It’s about this surgeon who keeps botching all of these spine surgeries, but everyone’s too afraid to report him to the medical board. So he just keeps moving from hospital to hospital and paralyzing people. It’s very dark, but it was a six-hour drive, so it kept me entertained.

I’m about to start wrapping more presents while watching “Let Them All Talk.” Then it’s a pit stop for some of my banana bread that is my favorite thing ever. It’s gluten- and dairy-free with like five ingredients and yes, I know — Covid/lockdown/banana bread — but I’ve been making this literally for years. So please, no judgment.

We were having a barn-decorating contest at the farm today so I decorated Ten’s stall with a unicorn theme. I didn’t win, but it’s just an honor to be nominated or whatever.

After the judging for the stall-decorating contest, we all gave our secret Santa gifts. Then I took down Ten’s decorations because she almost ingested a 10-foot-long piece of tinsel.

I headed home to wrap more gifts and hang with Moose. I really want to watch “PEN15,” but Evan and I watch that together so I can’t. So perhaps an old movie, possibly “Death Becomes Her.” I just realized that there seems to be a Meryl Streep theme going on here. Listen, I love me some Meryl — I mean, who doesn’t — but I definitely didn’t do that on purpose. Although what says, “It’s the holidays!” more than Meryl Streep? So I guess that’s it: I’m just in a very Meryl Christmas mood.