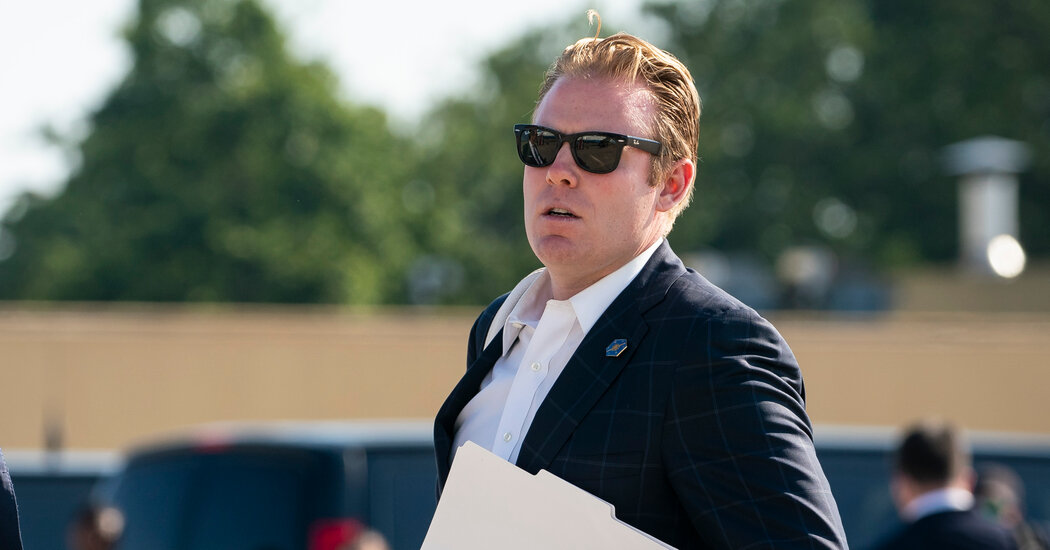 Andrew H. Giuliani, a White House aide and the son of President Trump’s personal lawyer, has a longstanding relationship with Mr. Trump.Credit…Al Drago for The New York Times

After elevating a coterie of close friends and allies to prime spots on boards and commissions in recent weeks, President Trump on Wednesday announced plans to appoint Andrew H. Giuliani, a White House aide and the son of his personal lawyer, Rudolph W. Giuliani, to serve as a member of the United States Holocaust Memorial Council.

Two other White House officials — Nicholas F. Luna and Mitch Webber — were also named members, according to the statement released by the White House. Presidential appointees serve a five-year term on the council, which acts as the board of trustees of the Holocaust Memorial Museum in Washington.

Andrew Giuliani and the president have enjoyed a close personal relationship for years, including when Mr. Giuliani was a teenager and Mr. Trump helped him reconcile with his father after his parents’ divorce, according to reporting in The Atlantic. And in 2017, the president hired the younger Mr. Giuliani to work in the White House Office of Public Liaison and Intergovernmental Affairs after a series of jobs in marketing, awarding him a $95,000 salary as a special assistant to the president, according to White House documents.

“He’s known the president since he was a baby,” the elder Mr. Giuliani told The Atlantic. “Now, did he know him in the first place because he was the mayor’s son? Sure, but they also had a relationship independent of me.”

The choice to place Mr. Giuliani on the council appeared to be plainly political, especially given the dissonance between the council’s past advocacy work, such as its condemnation of neo-Nazi rhetoric at the Unite the Right rally in Charlottesville in 2017, and a number of statements made by Mr. Giuliani’s father.

In an interview in 2019, the elder Mr. Giuliani, who was raised as a Roman Catholic, professed to be “more Jewish” than George Soros, the liberal philanthropist who is, himself, a survivor of the Holocaust.

The appointment of Mr. Giuliani is the latest in a string of similar moves by Mr. Trump to place friends on coveted boards. Last week, the president tapped Elaine Chao, the secretary of transportation and the wife of Senator Mitch McConnell of Kentucky, for a six-year term on the board of trustees for the John F. Kennedy Center for the Performing Arts in Washington. The president also placed his former White House counselor, Kellyanne Conway, in a role on the Air Force Academy’s board of visitors.

Cuomo Is Accused of Sexual Harassment by a 2nd Former Aide