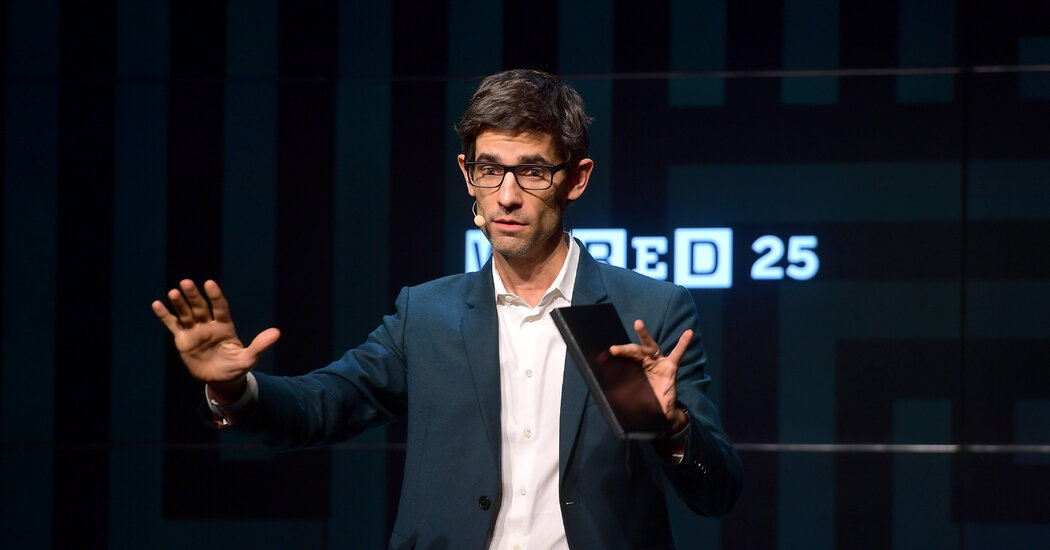 In the middle of a distinguished journalism career, Nicholas Thompson is becoming a media executive.Credit…Matt Winkelmeyer/Getty Images

The Atlantic, the 163-year-old publication that has grown under the stewardship of Laurene Powell Jobs, announced on Thursday that it had selected a new chief executive after a yearlong search: Nicholas Thompson, the editor in chief of Wired, the tech-focused magazine published by Condé Nast.

It is unusual for a journalist to take charge of a media outlet’s business operations, but Ms. Powell Jobs, whose Emerson Collective owns a majority stake in The Atlantic, and David G. Bradley, a minority owner, said in a joint email to the staff that Mr. Thompson was suited to the challenge.

“Nick is singular; we’ve seen no one like him,” Ms. Powell Jobs and Mr. Bradley wrote. “​As to leading and supporting ​Atlantic ​strategy, Nick brings a surround-sound coverage of relevant experience. Having been an editor, he is committed to the undergirding tenets of our work — superior editorial standards and complete editorial independence.”

Mr. Thompson, 45, has spent 15 years working as a writer and editor for Condé Nast publications, including The New Yorker, where he was the top digital editor from 2012 to 2017. In an interview, he said he had spoken with Jeffrey Goldberg, The Atlantic’s editor in chief, about the publication’s future, including a talk that took place during a socially distanced meeting in Mr. Thompson’s Brooklyn backyard one evening this week.

“Nick is one of the great innovators in journalism,” Mr. Goldberg said in a statement, “and I have enormous confidence that he will guide this company to a new era of subscription and reader growth, technological creativity and business success.”

The Atlantic’s search for a chief executive started last fall, after its former president, Bob Cohn, left the publication. It involved two search firms and included hundreds of candidates. Mr. Thompson, who is scheduled to start as its chief executive in February, and Mr. Goldberg, who has been the top editor since 2016, will both report to the publication’s board of directors.

The incoming chief executive said he had read The Atlantic while growing up near Boston, where the magazine, founded by New England thinkers like Ralph Waldo Emerson, had its headquarters before it moved to Washington in the years when Mr. Bradley was its sole owner.

Image Mr. Thompson with the September 1944 issue of The Atlantic.Credit…Danielle Goldman

Mr. Thompson, who became the Wired editor in chief in 2017, noted that he had instituted digital pay walls at The New Yorker and Wired during his tenures at those publications. “If you were to ask me what am I most proud about from my time at The New Yorker,” he said, “it’s helping to set up a pay wall that made The New Yorker’s future more solid.”

In a 2019 article for Wired, Mr. Thompson argued that persuading readers to pay for articles was good for journalism, as well as a publication’s chances at making money. “When your business depends on subscriptions, your economic success depends on publishing stuff your readers love — not just stuff they click,” he wrote. “It’s good to align one’s economic and editorial imperatives!”

Before going into journalism, Mr. Thompson worked as a street musician in New York and released three albums of acoustic guitar instrumentals. He is also the author of the 2009 book “The Hawk and the Dove,” a dual biography of the prominent Cold War figures George Kennan and Paul Nitze (who was Mr. Thompson’s maternal grandfather).

During his time as the digital editor of The New Yorker, Mr. Thompson moonlighted as a media entrepreneur, helping to found The Atavist, a digital magazine and publishing company that was later sold to the web publisher Automattic.

As the top editor of Wired — which got its start in 1993 as a publication known for its embrace of all things tech — he led coverage that was often critical of the industry, including a 2018 cover piece, co-written by Mr. Thompson and Fred Vogelstein, on the turmoil inside Facebook. The cover image was a photo illustration of a bruised and battered Mark Zuckerberg.

“I wanted to be covering tech in the smartest, fairest way possible,” Mr. Thompson said. “You don’t want to be anti-tech for the sake of anti-tech.”

In his new role, Mr. Thompson said, “there will be a line drawn” between The Atlantic’s business operations and the journalists led by Mr. Goldberg. He added that he did not anticipate that he would report or write for a while.

The Atlantic started charging readers for online content last fall, about two years after Ms. Powell Jobs’s philanthropic organization, Emerson Collective, took a majority stake in the publication. With that change in strategy, the venerable magazine joined a wave of legacy media companies that have sought to bring in more revenue from digital subscribers than from advertisers.

In addition to naming a new business head on Thursday, The Atlantic announced changes to its board of directors. Ms. Powell Jobs will become the chair in January. Mr. Bradley, the current chairman, will become chairman emeritus while retaining his minority stake and stepping away from daily management responsibilities. The Atlantic will also add its first outside director, Michelle Ebanks, the former chief executive of Essence Communications.

Since starting its pay wall, The Atlantic has sold 400,000 new subscriptions. It now has more than 700,000 print and digital subscribers, putting it on a pace to achieve its goal of having one million by the end of 2022.

The Atlantic has met the coronavirus pandemic with noteworthy coverage, including articles by the staff writer Ed Yong that have won awards from the National Press Club Journalism Institute and the Council for the Advancement of Science Writing. But the publication’s business has suffered in the pandemic’s economic fallout. The Atlantic laid off 68 employees in the spring, citing “a bracing decline in advertising” and a hit to its live-events business.

The Hotels Reimagining Their Rooms as Stylish Work Spaces

Betsy Wade, First Woman to Edit News at The Times, Dies at 91