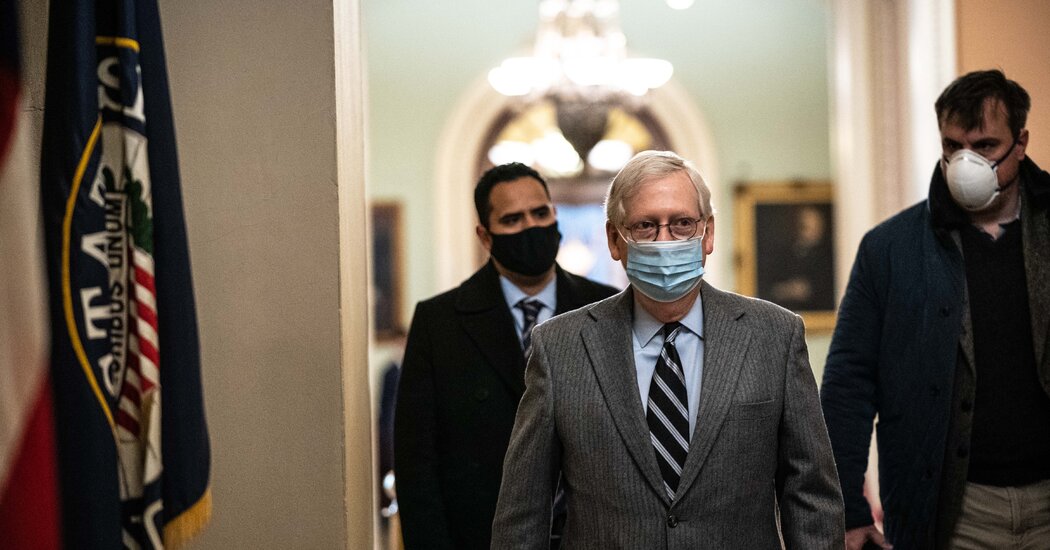 The emerging compromise would provide emergency stimulus payments, jobless aid and rental assistance, extending help to businesses and funding the distribution of a vaccine. But more is likely to be needed.

Senator Mitch McConnell warned Republicans on Wednesday to prepare to remain in Washington through the weekend.Credit…Anna Moneymaker for The New York Times

WASHINGTON — After months of stalemate, congressional leaders were on the verge on Wednesday of cementing a roughly $900 billion stimulus deal to deliver emergency aid to individuals and companies devastated by the toll of the worsening pandemic, racing to finish the details and stave off a government shutdown on Friday.

The measure, which has been under discussion for months as the coronavirus has ravaged the economy, is expected to provide a new round of direct payments to millions of Americans as well as additional unemployment benefits, food assistance and rental aid. It would prop up sputtering businesses with federally backed loans and provide funding for schools, hospitals and the distribution of a just-approved vaccine.

While the agreement was not yet final, Republicans and Democrats alike signaled that they were ready to coalesce around the main elements, marking an extraordinary shift from just weeks ago, when both sides were issuing ultimatums and refusing to budge from long-held positions.

It was unclear when a final agreement would be reached, as lawmakers and staff haggled over what Representative Kevin McCarthy of California, the Republican leader, referred to as “just the fine details we’ve got to get done.”

“We’ll be ready when we’re ready,” Speaker Nancy Pelosi of California told reporters. “A lot of writing goes into it and the rest.”

The momentum on Wednesday, however, indicated that relief could soon be on its way for individuals and businesses who have waited for months as economists have clamored for another robust infusion of federal aid, warning that Congress’s failure to act could do long-lasting damage.

“We’re making good progress,” said Senator Chuck Schumer of New York, the Democratic leader, in a brief interview on Wednesday afternoon as staff exchanged offers and counteroffers. “No one gets everything they want, but we’re feeling pretty good.”

But even as lawmakers moved toward striking an elusive deal, the package pointed to troubles on the horizon for President-elect Joseph R. Biden Jr., who had pressed for at least some compromise on emergency pandemic aid before year’s end. To break the logjam, Democrats appeared to have dropped their demand for a dedicated funding stream for states and cities that are facing fiscal ruin, guaranteeing that Mr. Biden will have to act early in his tenure to try to bolster them and take additional action to prop up the economy.

“The stimulus package is encouraging,” Mr. Biden said Wednesday at an event in Wilmington, Del. “But it’s a down payment — an important down payment on what’s going to have to be done beginning the end of January into February. But it’s very important to get done.”

For months, Democrats and Republicans had been unwilling to compromise amid a toxic presidential election. Democrats, who initially pushed a $3.4 trillion plan, held out for a much broader package than Republicans were willing to consider in the run-up to the November election, judging that President Trump and his party would pay a political price for failing to agree to a generous new batch of aid.

Republicans, for their part, were wary of any new federal spending and insisted on a much narrower plan that would extend sweeping coronavirus liability protections. They appeared to have put that demand aside in recent days in exchange for Democrats backing off their insistence on a large new infusion of state and local assistance. (Two officials familiar with the talks said there were other avenues to potentially provide the aid.)

But the political calculus changed after the election. Mr. Biden and his advisers began quietly pressing for Democrats to strike a deal — even a scaled-down one — and Senator Mitch McConnell, Republican of Kentucky and the majority leader, had powerful reasons of his own to compromise. On Wednesday, he suggested on a private call with Republicans that delivering the stimulus package could bolster the party’s hopes of hanging onto its majority in the Senate, according to three people who relayed his comments on the condition of anonymity.

Mr. McConnell said that Senators Kelly Loeffler and David Perdue, who are both facing runoffs in January that will determine which party controls the Senate, were “getting hammered” for Congress’s failure to deliver more pandemic aid to struggling Americans — particularly the direct payments — and that enacting the measure could help them. The majority leader also emphasized that the package could be signed by Mr. Trump, who has pushed for another round of stimulus checks.

Even as enthusiasm built that the long-stalled stimulus talks were finally bearing fruit, it was clear that the potential agreement was far smaller than what economists say is needed.

The plan under discussion amounts to less than half of the $2.2 trillion stimulus law enacted in March, and it does not come close to matching what many economists had said would be necessary to jolt the economy out of a pandemic-induced slump. They have warned for months about permanent economic damage and deteriorating prospects for a swift recovery, offering a grim backdrop as lawmakers traded blame.

Jerome H. Powell, the chair of the Federal Reserve, reiterated his call for more fiscal stimulus on Wednesday, saying that the continuing rise in Covid-19 cases and the lapse in funding for several programs that were helping households and businesses stay afloat posed challenges for the economy.

“The case for fiscal policy right now is very, very strong, and I think that’s widely understood right now,” he said. “Now that we can kind of see the light at the end of the tunnel, it would be bad to see people losing their business, their life’s work, even generations’ worth of work.”

Even as negotiations continued, there was evidence of economic harm the worsening pandemic was causing. Retail sales fell 1.1 percent in November, the Commerce Department reported, with restaurants and bars experiencing even bigger declines as states reimposed business restrictions.

Other measures of economic activity have likewise slowed in recent weeks, and applications for unemployment benefits have surged. For the millions of Americans already relying on jobless benefits, the situation could be even more dire if two programs that expand and extend the unemployment insurance system expire after next week without congressional action.

Republicans have continued to insist that a package should remain under $1 trillion in order to maintain support within their ranks, leaving lawmakers and staff to wrangle over funding levels for various provisions and programs in the new measure. Ms. Pelosi and Mr. Schumer spoke with Steven Mnuchin, the Treasury secretary, for about 45 minutes on Wednesday as they worked to hammer out final details.

The measure, which builds off a $748 billion bill proposed by a bipartisan group of moderates this week, is expected to include $25 billion to establish a program that would provide emergency rental assistance to families affected by the pandemic, as well as billions for vaccine development and distribution, broadband and schools across the country.

Negotiators were still discussing the possible inclusion of House legislation that provides funds to distribute to states and cities and to fully cover the costs of emergency work during the pandemic. They were also still haggling over an expansion and extension of unemployment benefits and how long they would last. The agreement is expected to revive lapsed enhanced unemployment benefits at about $300 a week, half of the original benefit approved in March, which lapsed over the summer. But Republicans were insisting on curtailing the number of weeks of benefits to help offset the cost of providing stimulus payments.

In addition to the jobless aid, the plan would provide a one-time direct payment to Americans, expected to be about $600 per person, also half the amount provided under the March stimulus law.

Senator Bernie Sanders, independent of Vermont, who has been vocal about his belief that Democrats succumbed too easily to Republican demands, and Senator Joe Manchin III, Democrat of West Virginia, a leader of the bipartisan group, got into a heated exchange on a private Democratic caucus call over progressives’ push to increase the amount of the direct payments, according to three people familiar with the discussion.

The measure is likely to advance as part of a catchall spending package that will include the dozen annual bills needed to fund the government through the end of the fiscal year. Among the unresolved issues was whether to include a bipartisan, bicameral agreement on legislation that would end the practice of surprise medical billing.

“I’m cautiously optimistic that maybe we will be able to finish up by the end of this week,” said Senator Susan Collins, Republican of Maine and one of the key lawmakers involved in drafting the bipartisan proposal.

But Mr. McConnell warned Republicans in the private conference call to prepare to remain in Washington through the weekend as lawmakers and aides finish the details and write legislative text.

Reporting was contributed by Nicholas Fandos and Ben Casselman from New York, and Catie Edmondson, Thomas Kaplan and Jeanna Smialek from Washington.