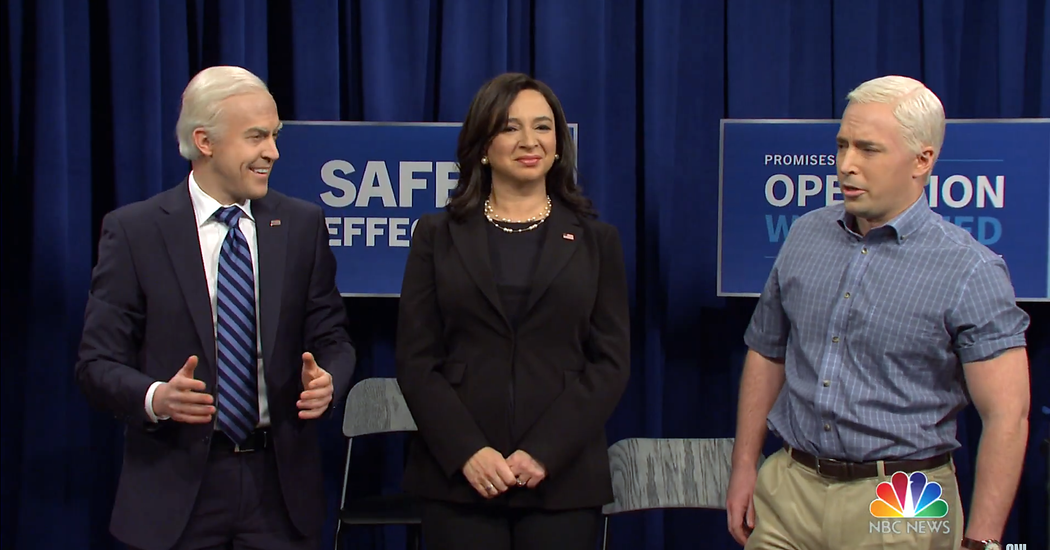 Alex Moffat became the latest “S.N.L.” cast member to portray Biden, following Carrey’s announcement that he was stepping down from the role.

The role of Joe Biden was taken over on “S.N.L.” this week by Alex Moffat, left, pictured with Maya Rudolph as Kamala Harris and Beck Bennett as Mike Pence.Credit…NBC Universal, via YouTube

It was with some fanfare that “Saturday Night Live” announced in the fall that it had recruited Jim Carrey to play former Vice President Joseph R. Biden Jr., then the Democratic presidential nominee and now president-elect. At the time, Lorne Michaels, the “S.N.L.” creator and executive producer, went so far as to say that Carrey’s performance would be “stunning and possibly transcend comedy.”

But Carrey’s exit from the role, which he had not played since November, was more subdued. In a tweet posted on Saturday afternoon, Carrey wrote that his time playing Biden “was only meant to be 6 weeks” and that although he considered the assignment to be “comedy’s highest call of duty,” he was “just one in a long line of proud, fighting SNL Bidens!” (As long time viewers know, the part had previously been played by cast members and guest stars including Jason Sudeikis, Woody Harrelson and John Mulaney.)

And by Saturday night, “S.N.L.” had already lined up another cast member, Alex Moffat, to play Biden in the show’s opening sketch.

The sketch focused on Vice President Mike Pence (played by Beck Bennett) preparing to receive a coronavirus vaccine. “I’m sure all Americans are excited to see me, the guy who let Covid spread everywhere, get one of the first vaccines,” Bennett said.

He said that he wanted “to reassure the American people that this vaccine is completely safe and harmless,” adding, “That’s why President Trump refuses to take it or talk about it.”

Bennett then offered thanks “to all Americans for trusting President Trump with your health.”

“He may not be doing president anymore,” Bennett continued, “but he still cares deeply about not going to prison.”

After receiving the vaccine from a doctor played by Mikey Day, Bennett declared, “I didn’t feel a thing.”

“No, I meant for the past four years, I haven’t felt a thing.” Bennett said. “Just kind of watched the country burn.”

They were joined by Maya Rudolph in her recurring role as Vice President-elect Kamala Harris. “How did you even get into the White House?” Bennett asked, scrambling to cover up his exposed forearms.

Here, Moffat made his entrance as Biden, walking with a cane and wearing an orthopedic boot on one foot — only to turn a Willy Wonka-style somersault and stand upright.

Moffat replied: “I’m like Colonel Sanders — every time you see me I’m a different guy. There’s a good chance that this time next year, I’m going to be Mario Lopez.”

This week’s episode, hosted by the “S.N.L.” alum Kristen Wiig and featuring Dua Lipa as its musical guest, was the final live broadcast of the year, which of course meant lots of sketches about Christmas. In keeping with the holiday spirit, Wiig used her opening monologue to perform a version of “My Favorite Things” that started off sincere but quickly veered off to some strange places. As she sang in one verse:

Jackets on ponies and bread on baloney,
Hawk and Shalhoub are my two favorite Tonys.
Going to court dressed like “Lord of the Rings,”
These are a few of my favorite things.

Rudolph joined her onstage to explain that these were not the correct lyrics and began to sing what she said was the authentic version of the song:

Pop rocks on hot dogs and mustard on lady,
Musical improv of Mr. Wayne Brady,
Sitting quite nude on an exercise bike,
These are just some of the things that I like.

Kate McKinnon came out, too, and offered still another attempt:

Who makes sure that every Christmas morning runs like clockwork and that everyone in the family is well-fed and cozy as they open presents? Oftentimes that role falls to Mom.

But in this household, while Dad, Bro and Sis (Bennett, Mooney and Chloe Fineman) are rapping about all the exciting goodies they’ve just unboxed — a Nerf gun, a telescope, a watch, a laptop and matching hoverboards — what did Mom (Wiig) receive this year? A robe and … that’s it. Just a robe. (The dog gets one, too.)

It doesn’t make for a happy holiday, though it is comedically satisfying to see Wiig rhyme her way through her character’s passive aggression. (Now please use this opportunity to make sure you’ve gotten your mom a suitable and personalized gift.)

Over at the Weekend Update desk, the anchors Colin Jost and Michael Che prepared to bid farewell to President Trump and continued to riff on the vaccine rollout.

Well, guys, barring a reverse Christmas miracle, this is the last Weekend Update with Donald Trump still in office. Now, as a president he was mostly bad, but there were a few bright spots. So before he is tranquilized and moved like a dinosaur in “Jurassic Park,” I just want to take a moment to recognize some of his greatest moments in office.

The screen then showed a montage of highlights from President Trump’s time in office, set to “Closing Time” by Semisonic. They included:

“So, America don’t cry because it’s over,” Jost added after the montage. “Smile because it happened. And then probably cry a little bit. I don’t know, I’m still working it out with my therapist.”

Moving on to the vaccine in a later riff, Jost said:

The White House has left it up to the states to distribute the vaccine, because knowing Trump, I thought for sure it would be done through a live Powerball lottery. The ratings would have been insane, and it would have been the first White House job Ivanka was qualified for.

Che then shifted the topic to a group of Trump supporters, observing:

During a pro-Trump rally in Washington, D.C., protesters burned Black Lives Matter signs at two historic Black churches. You know, I don’t want to be too judgmental here. But at some point, when you’re setting fires at Black churches, you’ve got to stop and ask yourself, “Hey, am I the bad guy here?”

If you bring Wiig back to host “S.N.L.,” you’re going to have her revisit some of the distinct and idiosyncratic characters she so memorably played in her time on the show.

Earlier in this week’s broadcast, she reprised Mindy Elise Grayson, the bygone actress who is perpetually making life difficult for contestants on the game show “Secret Word.” And if you stuck around to the end of the night, you got to see her return to the role of the excitable Sue, the sweater-clad aunt who absolutely cannot avoid ruining surprises, even if she has to swallow an entire Elf on the Shelf or crash through a first-story window.

Here’s hoping the surprises awaiting us in 2021 are only good ones.